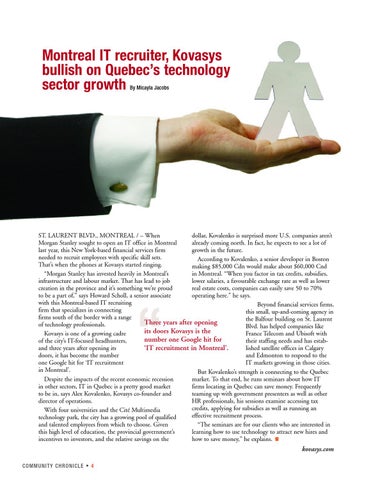 ST. LAURENT BLVD., MONTREAL / – When dollar, Kovalenko is surprised more U.S. companies aren’t Morgan Stanley sought to open an IT office in Montreal already coming north. In fact, he expects to see a lot of last year, this New York-based financial services firm growth in the future. needed to recruit employees with specific skill sets. According to Kovalenko, a senior developer in Boston That’s when the phones at Kovasys started ringing. making $85,000 Cdn would make about $60,000 Cnd “Morgan Stanley has invested heavily in Montreal’s in Montreal. “When you factor in tax credits, subsidies, infrastructure and labour market. That has lead to job lower salaries, a favourable exchange rate as well as lower creation in the province and it’s something we’re proud real estate costs, companies can easily save 50 to 70% to be a part of,” says Howard Scholl, a senior associate operating here.” he says. with this Montreal-based IT recruiting Beyond financial services firms, firm that specializes in connecting this small, up-and-coming agency in firms south of the border with a range the Balfour building on St. Laurent Three years after opening of technology professionals. Blvd. has helped companies like its doors Kovasys is the Kovasys is one of a growing cadre France Telecom and Ubisoft with number one Google hit for of the city’s IT-focused headhunters, their staffing needs and has estab‘IT recruitment in Montreal’. and three years after opening its lished satellite offices in Calgary doors, it has become the number and Edmonton to respond to the one Google hit for ‘IT recruitment IT markets growing in those cities. in Montreal’. But Kovalenko’s strength is connecting to the Quebec Despite the impacts of the recent economic recession market. To that end, he runs seminars about how IT in other sectors, IT in Quebec is a pretty good market firms locating in Quebec can save money. Frequently to be in, says Alex Kovalenko, Kovasys co-founder and teaming up with government presenters as well as other director of operations. HR professionals, his sessions examine accessing tax credits, applying for subsidies as well as running an With four universities and the Cité Multimedia effective recruitment process. technology park, the city has a growing pool of qualified and talented employees from which to choose. Given “The seminars are for our clients who are interested in this high level of education, the provincial government’s learning how to use technology to attract new hires and incentives to investors, and the relative savings on the how to save money,” he explains. 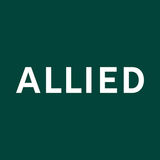