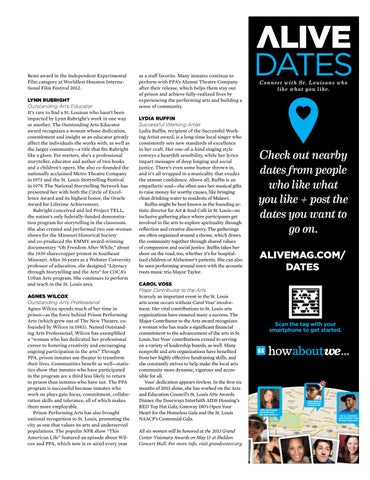 Lynn Rubright Outstanding Arts Educator It’s rare to find a St. Louisan who hasn’t been impacted by Lynn Rubright’s work in one way or another. The Outstanding Arts Educator award recognizes a woman whose dedication, commitment and insight as an educator greatly affect the individuals she works with, as well as the larger community—a title that fits Rubright like a glove. For starters, she’s a professional storyteller, educator and author of two books and a children’s opera. She also co-founded the nationally acclaimed Metro Theatre Company in 1973 and the St. Louis Storytelling Festival in 1979. The National Storytelling Network has presented her with both the Circle of Excellence Award and its highest honor, the Oracle Award for Lifetime Achievement. Rubright conceived and led Project TELL, the nation’s only federally-funded demonstration program for storytelling in the classroom. She also created and performed two one-woman shows for the Missouri Historical Society and co-produced the EMMY award-winning documentary “Oh Freedom After While,” about the 1939 sharecropper protest in Southeast Missouri. After 36 years as a Webster University professor of education, she designed “Literacy through Storytelling and the Arts” for COCA’s Urban Arts program. She continues to perform and teach in the St. Louis area. Agnes Wilcox Outstanding Arts Professional Agnes Wilcox spends much of her time in prison—as the force behind Prison Performing Arts (which grew out of The New Theatre, cofounded by Wilcox in 1983). Named Outstanding Arts Professional, Wilcox has exemplified a “woman who has dedicated her professional career to fostering creativity and encouraging ongoing participation in the arts.” Through PPA, prison inmates use theater to transform their lives. Communities benefit as well—statistics show that inmates who have participated in the program are a third less likely to return to prison than inmates who have not. The PPA program is successful because inmates who work on plays gain focus, commitment, collaboration skills and tolerance, all of which makes them more employable. Prison Performing Arts has also brought national recognition to St. Louis, promoting the city as one that values its arts and underserved populations. The popular NPR show “This American Life” featured an episode about Wilcox and PPA, which now is re-aired every year

as a staff favorite. Many inmates continue to perform with PPA’s Alumni Theatre Company after their release, which helps them stay out of prison and achieve fully-realized lives by experiencing the performing arts and building a sense of community. Lydia Ruffin Successful Working Artist Lydia Ruffin, recipient of the Successful Working Artist award, is a long-time local singer who consistently sets new standards of excellence in her craft. Her one-of-a-kind singing style conveys a heartfelt sensibility, while her lyrics impart messages of deep longing and social justice. There’s even some humor thrown in, and it’s all wrapped in a musicality that exudes the utmost confidence. Above all, Ruffin is an empathetic soul—she often uses her musical gifts to raise money for worthy causes, like bringing clean drinking water to residents of Malawi. Ruffin might be best known as the founding artistic director for Art &amp; Soul Café in St. Louis—an inclusive gathering place where participants get involved in the arts to explore spirituality through reflection and creative discovery. The gatherings are often organized around a theme, which draws the community together through shared values of compassion and social justice. Ruffin takes her show on the road, too, whether it’s for hospitalized children or Alzheimer’s patients. She can also be seen performing around town with the acoustic roots music trio Mayor Taylor. Carol Voss Major Contributor to the Arts Scarcely an important event in the St. Louis arts scene occurs without Carol Voss’ involvement. Her vital contributions to St. Louis arts organizations have ensured many a success. The Major Contributor to the Arts award recognizes a woman who has made a significant financial commitment to the advancement of the arts in St. Louis, but Voss’ contributions extend to serving on a variety of leadership boards, as well. Many nonprofit and arts organizations have benefited from her highly effective fundraising skills, and she constantly strives to help make the local arts community more dynamic, vigorous and accessible for all. Voss’ dedication appears tireless. In the first six months of 2013 alone, she has worked on the Arts and Education Council’s St. Louis Arts Awards Dinner, the Doorways Interfaith AIDS Housing’s RED Top Hat Gala, Gateway 180’s Open Your Heart for the Homeless Gala and the St. Louis NAACP’s Centennial Gala. All six women will be honored at the 2013 Grand Center Visionary Awards on May 13 at Sheldon Concert Hall. For more info, visit grandcenter.org.

Scan the tag with your smartphone to get started.

...Have drinks at Pi and then see a movie at The ...Bike ride through Forest Park and then grab brunch at

...Go to a Cardinals’ game and then stroll through Citygarden?