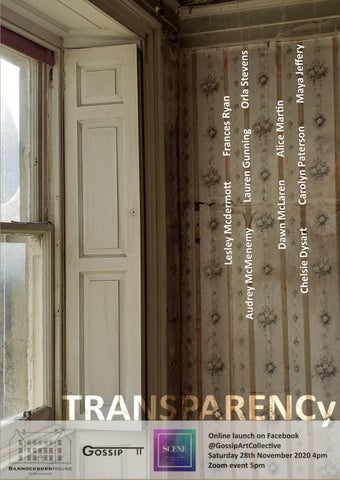 Introduction TRANSPARENCy features site specific installation artwork that echo themes of time, memory, presence and the ephemeral qualities of the space and light that are to be found within this unique historical setting. As part of this unusual group curation project, the ten women artists have specially selected their personal choice to reflect a connection inspired by aspects of the east wingâ&amp;#x20AC;&amp;#x2122;s curiously evocative, currently dilapidated state, from aged wallpaper and fabric motifs to the objects that embody the spirit of a bygone era.

On my first visit to Bannockburn House I was struck by its amazing resilience, despite the ravage of time, it stood, elegant, proud, beautiful. I was moved by the sense of time, wistful memories that lingered, feelings of wonder, intrigue and respect for the lives that dwelled in this building. As I walked, delighted, through each of the rooms, the surrounding interiors and ephemera held me spellbound. I invited friends to discover this place too, we would each choose a room to respond to, then the house would hold our artwork, for a little while.

My installations focus is on creating three-dimensional, mixed media compositions within the Dressing room and the Servantâ&amp;#x20AC;&amp;#x2122;s quarters. Each will comprise of a variety of elements utilising hanging, hand printed fabrics, positioned in relation to small sculptural pieces that explore aspects of the architectural motifs, historical references and imagined inhabitants.

Artwork in the fire damaged living room in Bannockburn House

Making these works for the Bannockburn House Exhibition I was thinking about the break up of the relationship between Clementine Walkinshaw and Bonnie Prince Charlie and the control that he still had on her life and that of their child Charlotte long after they separated.

There is reference in the individual titles to conversations with my own daughter and also to current world events relating to the Black Lives Matter movement.

Placing these pieces together in the historical context of the house and the domestic setting brings together not only images but different times, narratives and stories both personal and universal. It highlights issues of oppression in the context of personal domestic situations as well as in the wider context of society and also the role that the past still plays on the present.

The pieces are ghost-like, each of them are connected to the others but they are all disconnected, lost. The ethereal atmosphere is to say ghosts past and present, here and gone. The constructed pieces are neither clothes nor art in the traditional sense.

The work was influenced by the soft colours and the beautiful textures in the house and the feeling of people who have been here before and the beauty they leave behind. Lesley McDermottâ&amp;#x20AC;&amp;#x2122;s idea for the &quot;Six Sisters&quot; print was also an inspiration as I felt there was something human and spiritual in that initial image.

When I first visited Bannockburn House I was inspired by the stories of the house itself but also the atmosphere and amazing features inside. I was particularly drawn to the texture of the charred remains of the fireplace and doors after the fire and the way that the light reflects onto them.

The wall on the main staircase really shows the passage of time and the neglect of the house with layers of flaking paint and dampness and moss climbing up the wall.

My fashion piece draws on these elements and also represents a spirit of the past.

In keeping with the theme of transparency I have used and created transparent fabrics and materials in my design.

‘The Doocot Loch’ painted for the ‘Transparency’ exhibition is inspired by the grounds of Bannockburn House - looking out past the Doocot, which you can see from the room where the work is situated in exhibit. I took both title and place as inspiration, working from photographs on the Bannockburn House blog as reference. This piece was painted during lockdown, and without the opportunity to visit in person, I worked from a photograph of the Doocot and a very flooded farmers field in the background, aptly named the ‘Doocot Loch’. I fused this inspiration with the word Transparency - applying it to the way I worked, in very thin layers of acrylic, to build the colours up in fine layers of colour washes.

The beauty of this project is the openness of the brief, and the variety of disciplines responding to such an inspirational property. It was great seeing some of the installations on set up day interacting with the space in such different ways.

This installation features the birthing rituals from the Medieval to Georgian to Victorian belief systems which have required the knowledge from many Pagan and Wiccan witches. Sadly, many of these women that were natural element midwives who practiced these rituals were often accused of witchcraft especially in the time of Oliver Cromwell. Even today, the use of herbs and natural elements are often frowned upon in modern medicine.

My work is inspired from the natural etheric of the pagan and spiritual world of which I work with daily as a Pagan Spiritualist since a very young age. The use of herbs, spices and natural objects have played feature in my work for many years. This installation is unique and personal to myself as a â&amp;#x20AC;&amp;#x2DC;Green Witchâ&amp;#x20AC;&amp;#x2122; as I myself am expecting my first child and plan to use these natural birthing rituals as opposed to modern medicines.

For this exhibition I have decided to reshow three sculptures which have been reworked from open cultural content. I have selected the bust of Monsignor Carlo Antonio dal Pozzo, held by National Galleries of Scotland, Edinburgh, as a starting point. A dialogue surrounding the sitterâ&amp;#x20AC;&amp;#x2122;s nephew, Cassiano dal Pozzo, who commissioned Gian Lorenzo Bernini to carve the portrait, is focused upon. His role as collector and patron to the arts is also reflected in my installation of 3D printed works.

Sources: Scan the World and The Metropolitan Museum of Art.

The 3D printed sculptures on display have been remixed from original works of cultural significance. I am attracted by the idea of displaying objects outside of formal institutions, hopefully this will allow the viewer to observe them in a different light. Previously these recreations were displayed in a white walled gallery. The idea of taking historic works and reimagining them in a contemporary way and then placing them back into a historical setting is what really interested me about this project.

Rats are misunderstood beings. They radiate the energy of being a survivor. Commonly, rats are deemed as vermin, the lowest of the low however what the majority fail to see is the intelligence, gentle being that resides within the small creatureâ&amp;#x20AC;&amp;#x2122;s body.

These rats explore the concept of the space that these individuals fill, each rat represents a lost friend. Making a non-space, a fulfilled space again.

This work is inspired by personal circumstances, of understanding animal nature, representation and symbolism.

During lockdown I received two gifts: my Peace lily flowering for the first time in three years and a beautiful screen-print from Lesley McDermott as part of her â&amp;#x20AC;&amp;#x153;Sistersâ&amp;#x20AC;? series.

When I saw the blue-green colour scheme of the image and its vertical lines, I immediately thought of that strangely magical moment when my plant seemed to grow from nothing. It made me feel hopeful in a strange and uncertain time, and I wanted to capture that feeling in a poem.

I also added some stitching to the screen-print as I wanted to magnify the floral design of the image.

A woman’s body skin bone flesh blood the womb menstruation birth menopause the flower is a symbol of birth and rebirth my friend is dying.

Inspired by the ‘Sister’s’ screen print.

Brochure to coincide with GOSSIP Collective's digital film tour of TRANSPARENCy, an exhibition of works at Bannockburn House. Featuring photography by Colours_of_Zephyra and brochure design by Alice Martin. 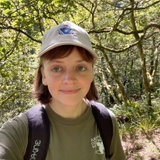