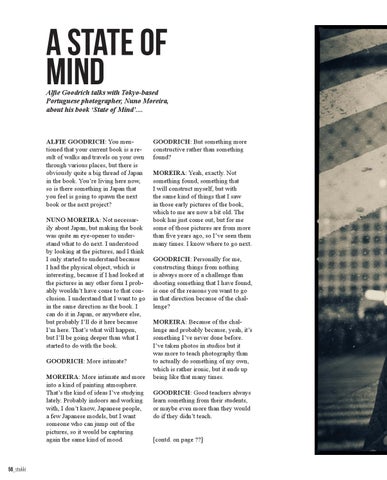 A State of Mind

ALFIE GOODRICH: You mentioned that your current book is a result of walks and travels on your own through various places, but there is obviously quite a big thread of Japan in the book. You’re living here now, so is there something in Japan that you feel is going to spawn the next book or the next project? NUNO MOREIRA: Not necessarily about Japan, but making the book was quite an eye-opener to understand what to do next. I understood by looking at the pictures, and I think I only started to understand because I had the physical object, which is interesting, because if I had looked at the pictures in any other form I probably wouldn’t have come to that conclusion. I understand that I want to go in the same direction as the book. I can do it in Japan, or anywhere else, but probably I’ll do it here because I’m here. That’s what will happen, but I’ll be going deeper than what I started to do with the book. GOODRICH: More intimate? MOREIRA: More intimate and more into a kind of painting atmosphere. That’s the kind of ideas I’ve studying lately. Probably indoors and working with, I don’t know, Japanese people, a few Japanese models, but I want someone who can jump out of the pictures, so it would be capturing again the same kind of mood.

GOODRICH: But something more constructive rather than something found? MOREIRA: Yeah, exactly. Not something found, something that I will construct myself, but with the same kind of things that I saw in those early pictures of the book, which to me are now a bit old. The book has just come out, but for me some of those pictures are from more than five years ago, so I’ve seen them many times. I know where to go next. GOODRICH: Personally for me, constructing things from nothing is always more of a challenge than shooting something that I have found, is one of the reasons you want to go in that direction because of the challenge? MOREIRA: Because of the challenge and probably because, yeah, it’s something I’ve never done before. I’ve taken photos in studios but it was more to teach photography than to actually do something of my own, which is rather ironic, but it ends up being like that many times. GOODRICH: Good teachers always learn something from their students, or maybe even more than they would do if they didn’t teach. [contd. on page ??] 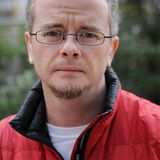 A bumper issue featuring Nuno Moneira, loads of fashion shoots, a trip over the Japanese Alps, a walk with the Hasselblad H5D-50, a visit to...

A bumper issue featuring Nuno Moneira, loads of fashion shoots, a trip over the Japanese Alps, a walk with the Hasselblad H5D-50, a visit to...