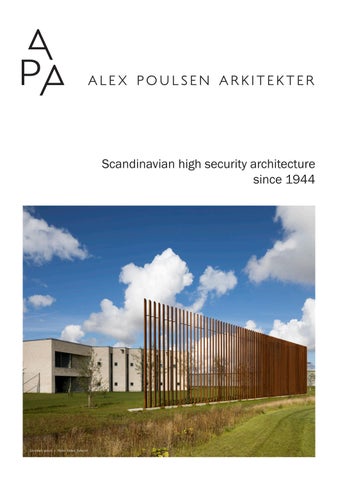 ”We are specialists within high security facilities based on Scandinavian correctional principles and Danish design tradition.”

”We strive to engage creatively and consciously with the world around us. Through inventive, socially viable and authentic projects, we aim to participate with and give back to society. ”

Alex Poulsen Architects (APA) are specialized in planning complicated buildings and environments with high security demands. In fact, planning and designing prisons is our passion and heritage. Since our design studio was established in 1944, APA has been a recognized collaboration partner and advisor for a large number of public and private institutions. APA has solved projects such as extensive new construction, conversions and renovations, carried out both in Denmark and internationally. We advise clients within our area of competence, where we possess special knowledge that creates value for the client as well as the society around us. Our approach to architecture stems from the Danish architectural tradition, considering function, quality and spaciousness as basic parameters. Our focus is to identify and meet our clients demands, and we strive to challenge ourselves at every project.

Jyderup prison, DK, is the first female-only prison in Denmark. The women’s prison was inaugurated in 2021 and has a capacity of approx. 140 inmates. The project has been realized by a combination of new construction, extension and remodeling of the existing prison. The prison consists of three typologies: detention, closed prison and open prison. During the planning and design phases, we focused on ensuring that the prison’s operation and security is maintained throughout the construction period, while the prison was gradually converted into a women’s prison. The distribution of the 3 typologies required a careful analysis of the prison’s logistics and security in order to ensure that the individual buildings are arranged, sectioned and secured both physically and electronically. A crucial part of the project was to design and build a new visitor’s building with the intent of supporting and maintaining the inmates’ relationship with their families. APA was the overall consultant and architect on the project in all design and project phases.

Ringe Prison, DK, is Denmark’s only closed prison for inmates sentenced to deportation. Ringe Fængsel was built in the mid-1970s as a modern prison in terms of architecture and correctional principles. The original prison was planned and designed by Alex Poulsen Arkitekter. The current expansion is inspired by the prison’s existing architecture, infrastructure and staffing principles. A cornerstone of the project is a new accommodation building, designed with a main corridor from which the individual departments originate. As a part of the current expansion project, central functions in the existing prison are being rebuilt and new secured outdoor areas are being built. In addition, the existing main building will be significantly remodeled - primarily administration areas and other support functions to ensure logistics and safety. In addition to the accommodation building, a new workshop building will also be built to ensure employment for the additional inmates. This expansion project will provide capacity for up to 100 inmates, doubling the capacity of the prison by 2024.

Storstrøm Prison, DK, is Denmark’s most modern and secure closed prison. The prison opened in 2017 and has a capacity of approx. 250 inmates.

The prison is organized so that architecture, security and correctional principles work in harmony and reflect a smaller urban community with cell buildings and buildings for workshops, education, church and exercise. The planning concept ensures that the inmates experience a high level of normalization, perceived as being less institutional, even with prison security as an integral part of the design and architecture. In addition to the prison’s normal cell departments, the prison has a maximum-security cell department - the securest in Denmark. APA not only prepared the building program in this project’s early phases but also was the client advisor until its completion.

Sdr. Omme Prison, DK, is a closed prison with a capacity of 200 inmates. The prison is being built adjacent to an existing open prison. With this project the Danish Prison and Probation Service wants to set the standard for future prison projects. Motivation, support and financially sound solutions that reinforce the Danish Prison and Probation Service’s current strategy and correctional principles are key elements. The project is planned and designed so that design and construction methods limits operating costs, maintenance costs and personnel costs as much as possible. The design and layout of the prison ensures a healthy working environment for the employees, supporting the development and maintainance of relationships between staff and inmates - a crucial part of the prison’s dynamic security. The design and layout ensure flexibility for the client, accommodating future changes in requirements and needs as well as expansion possibilities. APA is the overall consultant and architect on the project in all design and project phases. The prison is expected to be completed in 2025.

Holmsheidi Fangelsi, IS, was an architectural concept and proposal outlined by APA, as a response to a complex program prepared by the Icelandic government. The prison is located in Holmsheidi, outside Reykjavik, Iceland. All the prison’s functions are accommodated in a dense and compact building structure, encouraging interaction between employees and inmates. This ensures that all day-to-day operational functions can be maintained, creating a framework for extremely high level of security: both static and dynamic. Architecturally, the core of the building has a carefully planned geometry to ensure that there are views of the Icelandic landscape, benefiting all users in the prison. The building is located on the flat plateau of the site, with its four legs, blending into the meandering landscape and terrain. APA prepared the concept and layout proposal. The prison opened in 2016.

Enner Mark Prison, DK, is a state-of-the-art closed prison with a very high level of security. It was inaugurated in 2006 and is one of Denmark’s most modern prisons.

The prison consists of five independent and detached departments with a total capacity of 235 inmates. The prison is planned as a scattered, low-rise landscape of buildings, where the institutional character of the prison is toned down in order to reflect society outside the perimeter wall. The buildings allow for flexible sectioning, so the inmates can be divided and re-divided when necessary. At the same time, the prison is secured by a surrounding 6-meter tall and 1,400-meter long perimeter wall and 300 surveillance cameras. APA not only prepared the building program in this project’s early phases but also was the client advisor until its completion.

Competition proposal: In collaboration with Henning Larsen Architects, APA has prepared this proposal for a new Institution in Nuuk, Greenland. In the proposal, the perimeter wall is designed as a circle and its respective functions are placed in an urban-like context. The open part of the prison is located outside the perimeter wall. In the middle are ’shared’ functions, spread around a central courtyard. The closed residential section, and its associated functions, are located within the circle’s core. The building bodies are rectangular volumes of various sizes, arranged along a central street, in order to optimize the internal functional needs. The ambition was to create the feeling of living in a village -- a ’minicity’ that functions similary to outside society, with services that can contribute to living a normal life. The competition was won by Schmidt Hammer Lassen Architects in 2013. The prison is built and was put into use in 2019.

As support to the Project Implementation Unit under the Bosnian Ministry of Justice, APA was part of the Technical Assistance Team during the planning and construction of a new maximum security prison in East Ilidza, Sarajevo, with a capacity of 350 high-risk inmates. APA contributed with specific advice, from the initial design phase up to the detailed design phase, focusing on the project’s compliance of the European Convention on Human Rights and the European Prison Rules (European Prison Rules - Council of Europe, 2005/06). As senior prison design experts, APA provided -- among other things - special advice regarding the operational plan, feasibility report and development of the security concept. Also, APA provided support for the Project Implementation Unit, actively participating in the Technical Assistance Team in order to review the project during all phases, facilitating workshops as well as preparation of review mission reports for the EU, donors and local authorities.

APA performed client consultancy during the construction of four prisons in Macedonia. The project includes rebuilding, renovating and building new facilities for a total of around 2,500 inmates in four prisons in Macedonia: Idrizovo Correctional Facility, Skopje Prison, Kumanovo Prison and Tetovo Juvenile Educational Correctional Facility. The project’s primary purpose is to improve and update the current conditions in order to comply with the European Convention on Human Rights and the European Prison Rules (Council of Europe, 2005/06); and to bring existing buildings up to standard in both operation and maintenance in order to ensure acceptable living and working conditions for inmates and employees. The tasks, which were divided into phases, involved advice and assistance to the Macedonian Ministry of Justice regarding renovation and expansion; preparation of a construction program containing design concept; and functional and technical requirements specifications. Furthermore, APA has acted as a project manager for an international advisory team. The task was carried out in collaboration with COWI / IPF Consortium / Joint Venture, DK.

Psychiatric Center Ballerup, DK, is a closed 24-hour intensive care unit funded by the Psychiatric department within the capital region of Denmark.

The project includes a new 24-hour intensive care unit integrated into the hilly landscape. The scheme is laid out on one floor with 16 patient rooms, their common facilities and a shared activity hall, placed around a large, beautiful, closed and secured courtyard. The architecture consciously and gently uses design, form and robust materials - such as brick, glass, light and warm wood - to create safe, stimulating and treatment-optimal evironments for the users. The building’s tall facade discreetly acts as an enclosure, obstructing patients from leaving the courtyard. No fences needed. APA is the overall consultant and architect on the project in all design and project phases.

”We create architecture that develops, shapes, inspires and improves our society”