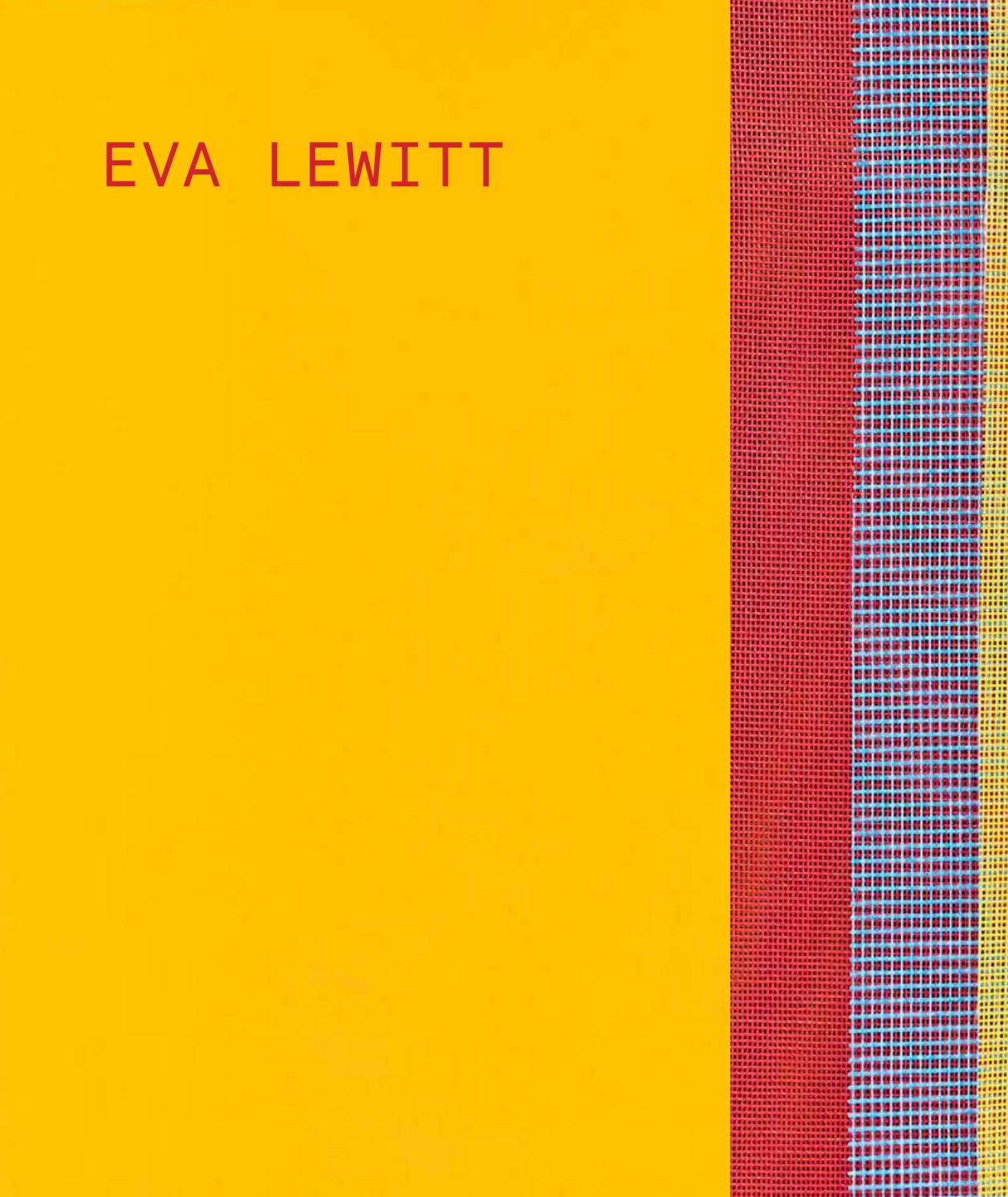 from The Aldrich Contemporary Art Museum 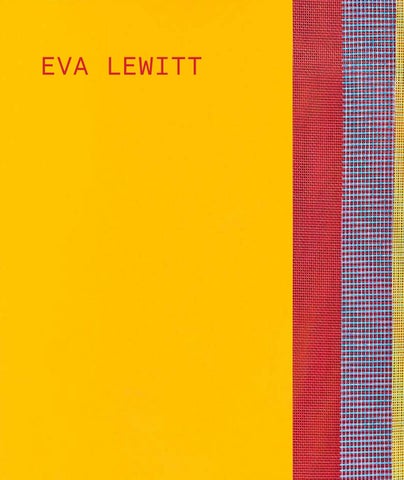 Eva LeWitt’s Sculptures of “Intimate Immensity”¹ “It’s a sensuous involvement with the wall, your body, and your mind. . . . Looking at it . . . The viewer is being asked to relive its making and feeling.” —Dorothea Rockburne2 The sculptural practice of Eva LeWitt is hinged on a methodology that harnesses ephemeral matter, such as luminosity and gravity, to alter perceptions about material meaning and spatial awareness. Generating sculptures and installations that harmonize color, matter, and space, LeWitt unites mediums with antagonistic properties to modify expected behavior: converting engineered and rigid materials like acetate and Plexiglas into pliable, buoyant, organic forms; casting and tinting synthetic foam, rubber, and sponge to anchor and maintain compositional structure; and manipulating the variable glow of permeable commercial-grade fabrics, vinyl, and latex through procedures of touch and overlay. This immeasurable synchronizing effect yields a penetrating sensuality best described by the French philosopher Gaston Bachelard (1884– 1962) as the “intensity of being evolved in a vast perspective of intimate immensity.”3 LeWitt’s work is informed by the reductive systems, industrial materials, and geometric preoccupations of Minimalism; the performative and strenuous activities of process art; and her own personal history and inimitable imagination. She grew up with art in the atmosphere, the daughter of the late father of Minimal and conceptual art, Sol LeWitt (1928–2007); her childhood was spent watching him in the studio, while also being exposed to the other influential artists in his orbit who, too, were stretching nontraditional methods to the outer limits. LeWitt attended undergraduate school at Bard, where she started her studies as a painter but graduated a sculptor. Favoring materials she could handle and maneuver alone in

the studio, she began experimenting with plastic, latex, and vinyl—substances that are available in an array of readymade colors and a variety of light absorbencies, and that are also susceptible to operations of alteration and transmutation. Employing strategies of accretion and repetition, LeWitt tailors her sculptures to comply with and adjust to the surroundings of a particular setting. She learned how to channel the energetic properties of a given material and how to work with extensive scale under the tutelage of Judy Pfaff (b. 1946), a pioneering figure of installation art. As a studio assistant for the artist Tara Donovan (b. 1969), LeWitt discovered that a sculptural process exclusively focused on an accumulative system of man-made objects, most notably plastics, could metamorphose those materials into works of art that unexpectedly shimmered. LeWitt’s process begins with a small model that she sizes up. She then plots out her installations on gridded paper with color markers, later collaborating with fabricators who assist her in what can best be described as a “barely there” method of display that allows her works to magically defy gravity. To call LeWitt’s installations ebullient may seem like an overstatement, but in real time the symphonic accord of color, form, and shine evoke a kinship with the expansive simplicity of works by Ellsworth Kelly (1923–2015). Her earliest investigations with acetate, a durable plastic, began in earnest in 2017. Available in a wide spectrum of tones, LeWitt began making works that ranged from life-size sculptures to room-scaled environments. For instance, an early wall work, Untitled (2017), resembling the skeletal innards of a colossal fish, is composed from hand-cast boxes of a creamy-white foam stacked vertically to form a backbone or vertebral column. Red and white acetate ribbons delicately balance atop each block like a bony frame, its bending formation further accentuated by two symmetrical yellow rubber, circular forms—intimating eyes— that counterbalance its bell-shaped curve and impart an anthropomorphizing effect. Another work

from that year, Parted Plastic (2017), fills an entire wall with a curtain of blue and white plastic bands appended to a valance comprising foam units. The soft slats part carnally at the middle, an affective opening held up by an arcing line of cobalt rubber knobs—an act that implies the potential for passage, handling, or variation. A year later, LeWitt began experimenting with intersecting and replicating modular wall works that when conjoined yielded immersive situations like Untitled (2018). Made specifically for the gallery VI, VII in Oslo, LeWitt unified the space’s plaster and stone walls by fabricating an encircling configuration of transecting, swooping crescents of primary colors that, when sections overlapped, materialized secondary and tertiary hues. Approximating drapery, the alternating plastic and latex strips formed sweeping patterns that morphed under changing light conditions, fluctuating air circulation, and the shifting feet of visitors. Vibrant polyurethane foam dots punctuated the ends of every stripe, securing each undulating wave and enhancing its prismatic tactility. The draping shapes hinted at domesticity but also the stage, with its potential for drama, intensifying an impulse to see what is secluded behind. Sometimes recognizable imagery emerges within LeWitt’s primarily abstract repertoire, as seen in the aforementioned Parted Plastic. This is most noticeable in a 2018 site-engaged installation, Untitled (Flora), commissioned by the Jewish Museum in New York for its lobby. LeWitt’s sculptural installation was conceived as a garden with eleven individual flowering shrubs forming a frieze along the atrium’s travertine walls. Made with acetate, sponge, and latex, the cut and bowed plastic segments were fastened together to model branches and stalks that seemed to lean and sway. LeWitt then adorned the ends with shaped and dyed sponge spots that emerged like blooms. The impetus for the installation’s floral motif was the lobby’s own fresh-flower centerpiece, a customary ornamental feature of many museum entryways.

Recently, LeWitt has been exploring fabrics of different weights and transparencies to create spatial arrangements that absorb and reflect light. For example, Untitled (Los Angeles) (2018), created for a three-person show at JOAN gallery in Los Angeles, featured cut and hung planes of organza, silk, and silkscreen mesh in sunny yellows and sky blues to form two monochromatic screens that bent around the gallery walls, softening the angles of the room and enfolding the interior. Counterbalancing the airy fabrics and mooring them in place were round and square foam shapes attached at the ends and tinted in corresponding shades of yellows and blues. The curtains faced off, forming two semicircular archways that charged the center and guided the relational static transpiring between subject, object, and site. For The Aldrich, LeWitt debuts a new site-specific installation, Untitled (Mesh A–J) (2019), her largest to date. Introducing a new material, vinyl- and fiberglasscoated meshes—most commonly used for filters, window screens, tarps, awnings, and even protective clothing—its crosshatched woven surface makes it lightweight and light-responsive. LeWitt fitted the installation’s silhouette to exploit and emphasize the proportions and contours of the Erna D. Leir Gallery, a nave-like rectilinear space with sixteenfoot-high ceilings and two small, square windows that accent the long walls and provide the room with its only natural illumination. The installation’s overall composition conforms to a specific feature situated on the room’s ceiling: an acoustic island (the gallery was designed to match the needs of a multipurpose event space). Depending on the hour and the season, the intensity of the sunlight in the gallery hardens and tempers over the course of each day. LeWitt suspended nine cumulative layers of this tensile mesh, spanning all four walls—hand-cut color fields that float from the ceiling and curl out at the floor to form interlacing, multihued moiré effects that swell and pulsate. At the gallery’s back end, a spherical curvature of the mesh simulates an apse. This domed structure reverberates in nine smaller half-moon sweeps, radiating chapels that open and close in succession out toward the room’s central core, or choir. Thus, onlookers are enveloped in a womb of

fluctuating ripples, emanating tinges of warm color and pulsing incandescence that travel with them. The installation’s exaggerated scale and repeating and mutating shapes recall the work of Eva Hesse (1936–1970), most notably her sculpture Expanded Expansion (1969). Like Hesse’s work, LeWitt’s sculptural environment feels as though it could contract and expand upon command. Customized for the Leir Gallery, the installation breaks down into eighteen individual parts that can be recombined or re-presented as individual works: a portable and modular system that responds and adapts to its context, defying the historically problematic nature of site-specific art.

During her formative years, LeWitt lived between Chester, Connecticut, and Spoleto, Italy, where today she spends her summers running a residency she co-founded for artists, writers, and curators. The design for LeWitt’s installation at The Aldrich may cite a notable feature of a twelfth-century Romanesque cathedral in Spoleto’s central plaza. During the Renaissance, between 1491 and 1504, a loggia was added to the façade. Comprised of five arcades, its form reemerges in the continuous soft arches that flank both sides of LeWitt’s Untitled (Mesh A–J). The oscillating color ribbons, overlaid reds, yellows, blues, browns, and grays, illuminate the room like stained glass, forming a series of soft kaleidoscopic interiors that swathe the viewer, reshaping spatial perception. Many significant contemporary artists have made installations that evoke the divine—Mark Rothko’s Chapel (1971), Louise Nevelson’s Chapel of the Good Shepherd (1977), and Ellsworth Kelly’s Austin (2015) are some of the most revered. In a singular gesture, LeWitt turns a specific site into a superlative atmosphere, saturating the room in scintillating coloration. Amy Smith-Stewart, Senior Curator Eva LeWitt was born in 1985 in Spoleto, Italy and currently lives and works in New York, NY. 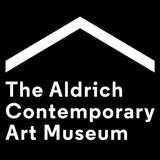