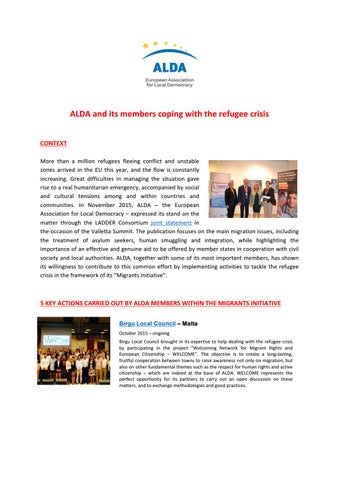 More than a million refugees fleeing conflict and unstable zones arrived in the EU this year, and the flow is constantly increasing. Great difficulties in managing the situation gave rise to a real humanitarian emergency, accompanied by social and cultural tensions among and within countries and communities. In November 2015, ALDA – the European Association for Local Democracy – expressed its stand on the matter through the LADDER Consortium joint statement in the occasion of the Valletta Summit. The publication focuses on the main migration issues, including the treatment of asylum seekers, human smuggling and integration, while highlighting the importance of an effective and genuine aid to be offered by member states in cooperation with civil society and local authorities. ALDA, together with some of its most important members, has shown its willingness to contribute to this common effort by implementing activities to tackle the refugee crisis in the framework of its “Migrants Initiative”.

Birgu Local Council brought in its expertise to help dealing with the refugee crisis by participating in the project “Welcoming Network for Migrant Rights and European Citizenship – WELCOME”. The objective is to create a long-lasting, fruitful cooperation between towns to raise awareness not only on migration, but also on other fundamental themes such as the respect for human rights and active citizenship – which are indeed at the base of ALDA. WELCOME represents the perfect opportunity for its partners to carry out an open discussion on these matters, and to exchange methodologies and good practices.

Reggio nel Mondo – Reggio Emilia, Italy December 2014 – June 2016 Since December 2014, Reggio nel Mondo has carried out “SPAR”, a project based on a theatre course for asylum seekers and refugees. This activity was a fundamental social tool to facilitate the integration in society of the Sub-Saharan boys who took part. They have indeed gradually become more aware of their abilities (also from the linguistic point of view), recovering self-esteem and confidence. This resulted in the play “This is my name”, which is currently being brought on stage by the migrants in different cities, and a replica is expected in Reggio Emilia in March 2016, in the occasion of the World Day Against Racism.

In June 2015 the Municipality of Thiene, together with local agencies and interested citizens, established a special board to start a local, open discussion on integration within the area. The objective is to favour the synergy between ethnic groups, and to highlight the many opportunities arising from cultural exchange, which has been done through various events and initiatives. Migrants have also been involved in activities of public utility – one of them was to clean local garbage cans. Moreover, since 2014 Thiene participates in the project “OASI” SPRAR and therefore currently hosts several asylum seekers, both in council and in private houses.

DRPDNM coordinated a group of volunteers working with refugees in Brežice, in cooperation with local agency ADRA. In this context, the Association also promoted a local collection of food, clothes and essential goods for the primary care of asylum seekers. Moreover, to fight prejudice and raise awareness DRPDNM regularly organises public discussions on migration issues with the participation of experts and academics. DRPDNM is also a member of the Coordination of nongovernment and humanitarian organizations, founded in August 2015 to prepare for and ensure a common response to the arrival of large numbers of refugees in Slovenia.

Since 2013 the Majorcan Fund has been supporting refugee women through a Red Cross project in Lebanon. The aim is to meet the need for gynaecological and obstetric care of Syrian and Palestinian women who fled their countries as a result of armed conflicts. The Lebanese healthcare system is based on copayment, which means that migrants are often prevented from accessing it. The Majorcan Fund covers the costs of childbirth for those women, a great support to the weakened household economies. Since the start of the programme almost 100 people have been able to benefit from such services at hospitals all over the country. 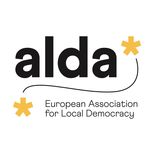