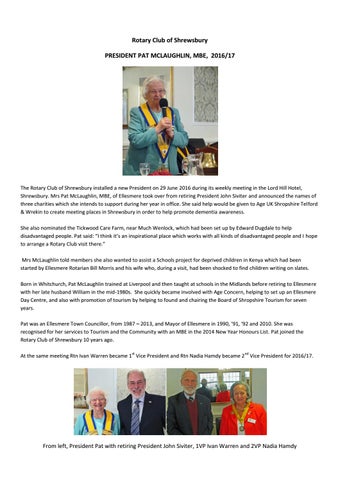 The Rotary Club of Shrewsbury installed a new President on 29 June 2016 during its weekly meeting in the Lord Hill Hotel, Shrewsbury. Mrs Pat McLaughlin, MBE, of Ellesmere took over from retiring President John Siviter and announced the names of three charities which she intends to support during her year in office. She said help would be given to Age UK Shropshire Telford & Wrekin to create meeting places in Shrewsbury in order to help promote dementia awareness. She also nominated the Tickwood Care Farm, near Much Wenlock, which had been set up by Edward Dugdale to help disadvantaged people. Pat said: “I think it’s an inspirational place which works with all kinds of disadvantaged people and I hope to arrange a Rotary Club visit there.” Mrs McLaughlin told members she also wanted to assist a Schools project for deprived children in Kenya which had been started by Ellesmere Rotarian Bill Morris and his wife who, during a visit, had been shocked to find children writing on slates. Born in Whitchurch, Pat McLaughlin trained at Liverpool and then taught at schools in the Midlands before retiring to Ellesmere with her late husband William in the mid-1980s. She quickly became involved with Age Concern, helping to set up an Ellesmere Day Centre, and also with promotion of tourism by helping to found and chairing the Board of Shropshire Tourism for seven years. Pat was an Ellesmere Town Councillor, from 1987 – 2013, and Mayor of Ellesmere in 1990, ‘91, ‘92 and 2010. She was recognised for her services to Tourism and the Community with an MBE in the 2014 New Year Honours List. Pat joined the Rotary Club of Shrewsbury 10 years ago. st

President of the Rotary Club of Shrewsbury Mrs Pat McLaughlin announced three charities which she wishes to support during her 2016/17 year...

President of the Rotary Club of Shrewsbury Mrs Pat McLaughlin announced three charities which she wishes to support during her 2016/17 year...