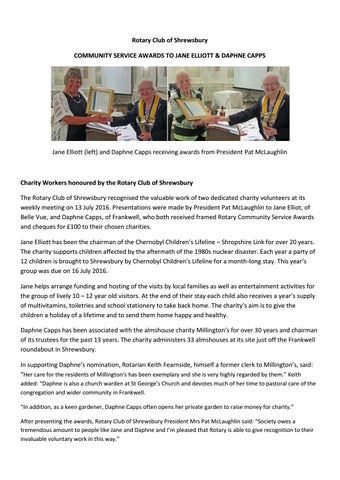 Charity Workers honoured by the Rotary Club of Shrewsbury The Rotary Club of Shrewsbury recognised the valuable work of two dedicated charity volunteers at its weekly meeting on 13 July 2016. Presentations were made by President Pat McLaughlin to Jane Elliot, of Belle Vue, and Daphne Capps, of Frankwell, who both received framed Rotary Community Service Awards and cheques for £100 to their chosen charities. Jane Elliott has been the chairman of the Chernobyl Children’s Lifeline – Shropshire Link for over 20 years. The charity supports children affected by the aftermath of the 1980s nuclear disaster. Each year a party of 12 children is brought to Shrewsbury by Chernobyl Children’s Lifeline for a month-long stay. This year’s group was due on 16 July 2016. Jane helps arrange funding and hosting of the visits by local families as well as entertainment activities for the group of lively 10 – 12 year old visitors. At the end of their stay each child also receives a year’s supply of multivitamins, toiletries and school stationery to take back home. The charity’s aim is to give the children a holiday of a lifetime and to send them home happy and healthy. Daphne Capps has been associated with the almshouse charity Millington’s for over 30 years and chairman of its trustees for the past 13 years. The charity administers 33 almshouses at its site just off the Frankwell roundabout in Shrewsbury. In supporting Daphne’s nomination, Rotarian Keith Fearnside, himself a former clerk to Millington’s, said: “Her care for the residents of Millington’s has been exemplary and she is very highly regarded by them.” Keith added: “Daphne is also a church warden at St George’s Church and devotes much of her time to pastoral care of the congregation and wider community in Frankwell. “In addition, as a keen gardener, Daphne Capps often opens her private garden to raise money for charity.” After presenting the awards, Rotary Club of Shrewsbury President Mrs Pat McLaughlin said: “Society owes a tremendous amount to people like Jane and Daphne and I’m pleased that Rotary is able to give recognition to their invaluable voluntary work in this way.”