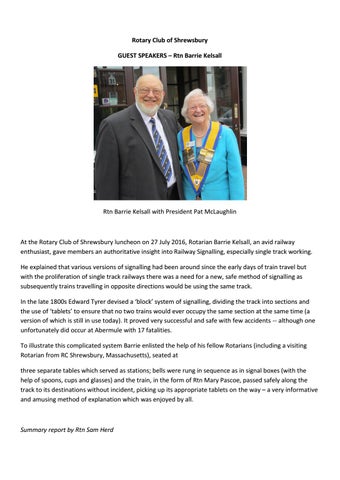 At the Rotary Club of Shrewsbury luncheon on 27 July 2016, Rotarian Barrie Kelsall, an avid railway enthusiast, gave members an authoritative insight into Railway Signalling, especially single track working. He explained that various versions of signalling had been around since the early days of train travel but with the proliferation of single track railways there was a need for a new, safe method of signalling as subsequently trains travelling in opposite directions would be using the same track. In the late 1800s Edward Tyrer devised a ‘block’ system of signalling, dividing the track into sections and the use of ‘tablets’ to ensure that no two trains would ever occupy the same section at the same time (a version of which is still in use today). It proved very successful and safe with few accidents -- although one unfortunately did occur at Abermule with 17 fatalities. To illustrate this complicated system Barrie enlisted the help of his fellow Rotarians (including a visiting Rotarian from RC Shrewsbury, Massachusetts), seated at three separate tables which served as stations; bells were rung in sequence as in signal boxes (with the help of spoons, cups and glasses) and the train, in the form of Rtn Mary Pascoe, passed safely along the track to its destinations without incident, picking up its appropriate tablets on the way – a very informative and amusing method of explanation which was enjoyed by all.

The Rotary Club of shrewsbury heard a talk from one of its members, Barrie Kelsall, on 27 July 2016 about railway signalling.

The Rotary Club of shrewsbury heard a talk from one of its members, Barrie Kelsall, on 27 July 2016 about railway signalling.