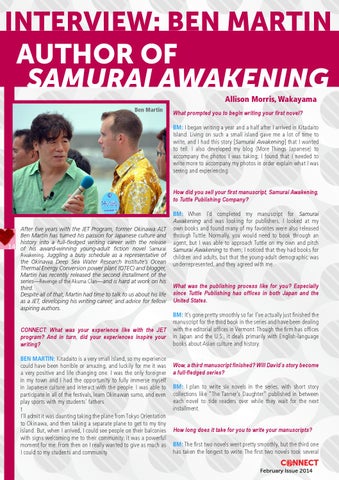 What prompted you to begin writing your first novel? BM: I began writing a year and a half after I arrived in Kitadaito Island. Living on such a small island gave me a lot of time to write, and I had this story [Samurai Awakening] that I wanted to tell. I also developed my blog (More Things Japanese) to accompany the photos I was taking; I found that I needed to write more to accompany my photos in order explain what I was seeing and experiencing. How did you sell your first manuscript, Samurai Awakening, to Tuttle Publishing Company? BM: When I’d completed my manuscript for Samurai Awakening and was looking for publishers, I looked at my

After five years with the JET Program, former Okinawa ALT Ben Martin has turned his passion for Japanese culture and history into a full-fledged writing career with the release of his award-winning young-adult fiction novel Samurai Awakening. Juggling a busy schedule as a representative of the Okinawa Deep Sea Water Research Institute’s Ocean Thermal Energy Conversion power plant (OTEC) and blogger, Martin has recently released the second installment of the series—Revenge of the Akuma Clan—and is hard at work on his third. Despite all of that, Martin had time to talk to us about his life as a JET, developing his writing career, and advice for fellow aspiring authors.

CONNECT: What was your experience like with the JET program? And in turn, did your experiences inspire your writing? BEN MARTIN: Kitadaito is a very small island, so my experience could have been horrible or amazing, and luckily for me it was a very positive and life changing one. I was the only foreigner in my town and I had the opportunity to fully immerse myself in Japanese culture and interact with the people. I was able to participate in all of the festivals, learn Okinawan sumo, and even play sports with my students’ fathers. t I’ll admit it was daunting taking the plane from Tokyo Orientation to Okinawa, and then taking a separate plane to get to my tiny island. But, when I arrived, I could see people on their balconies with signs welcoming me to their community; it was a powerful moment for me. From then on I really wanted to give as much as I could to my students and community.

own books and found many of my favorites were also released through Tuttle. Normally, you would need to book through an agent, but I was able to approach Tuttle on my own and pitch Samurai Awakening to them; I noticed that they had books for children and adults, but that the young-adult demographic was underrepresented, and they agreed with me. What was the publishing process like for you? Especially since Tuttle Publishing has offices in both Japan and the United States. BM: It’s gone pretty smoothly so far. I’ve actually just finished the manuscript for the third book in the series and have been dealing with the editorial offices in Vermont. Though the firm has offices in Japan and the U.S., it deals primarily with English-language books about Asian culture and history. Wow, a third manuscript finished? Will David’s story become a full-fledged series? BM: I plan to write six novels in the series, with short story collections like “The Tanner’s Daughter” published in between each novel to tide readers over while they wait for the next installment. How long does it take for you to write your manuscripts? BM: The first two novels went pretty smoothly, but the third one has taken the longest to write. The first two novels took several

As the cover suggests, the February issue does feature articles about those warm fuzzy feelings of love. We discover readers' favorite romantic spots in Japan, assure you that giri-choco isn't all that bad, and look behind the science of attraction. However, the issue isn't purely Valentine's-focused! We also have an in-depth look at the 'tradition' of Japanese unpaid overtime, a CrossConnect review of Sukiyabashi Jiro, and an interview with Ben Martin, author of the Samurai Awakening series of novels. Find these features, Spotlights, editorials, photos, haiku and more inside the pages of the February edition! 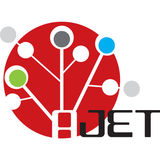