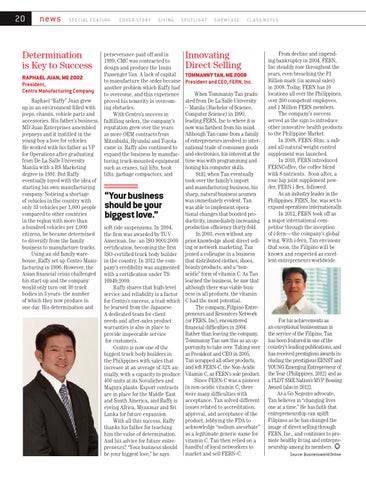 Determination is Key to Success

perseverance paid off and in 1999, CMC was contracted to design and produce the Isuzu Passenger Van. A lack of capital RAPHAEL JUAN, ME 2002 to manufacture the order became President, another problem which Raffy had Centro Manufacturing Company to overcome, and this experience Raphael “Raffy” Juan grew proved his temerity in overcomup in an environment filled with ing obstacles. jeeps, chassis, vehicle parts and With Centro’s success in accessories. His father’s business, fulfilling orders, the company’s MD Juan Enterprises assembled reputation grew over the years jeepneys and it instilled in the as more OEM contracts from young boy a love for vehicles. Mitsubishi, Hyundai and Toyota He worked with his father as VP came in. Raffy also continued to for Operations after graduating expand the business by manufacfrom De La Salle University turing truck-mounted equipment Manila with a BS Marketing such as cranes, tail lifts, hook degree in 1991. But Raffy lifts, garbage compactors, and eventually toyed with the idea of starting his own manufacturing company. Noticing a shortage of vehicles in the country with only 33 vehicles per 1,000 people compared to other countries in the region with more than a hundred vehicles per 1,000 soft ride suspensions. In 2004, citizens, he became determined the firm was awarded by TUV to diversify from the family American, Inc. an ISO 9001:2000 business to manufacture trucks. certification, becoming the first Using an old family wareISO-certified truck body builder house, Raffy set up Centro Manu- in the country. In 2012 the comfacturing in 1996. However, the pany’s credibility was augmented Asian financial crisis challenged with a certification under TS his start-up and the company 16949:2009. would only turn out 30 truck Raffy shares that high-level bodies in 3 years- the number service and reliability is a factor of which they now produce in for Centro’s success, a trait which one day. His determination and he learned from the Japanese. A dedicated team for client needs and after-sales product warranties is also in place to provide impeccable service for customers. Centro is now one of the biggest truck body builders in the Philippines with sales that increase at an average of 32% annually, with a capacity to produce 450 units at its Novaliches and Maguya plants. Export contracts are in place for the Middle East and South America, and Raffy is eyeing Africa, Myanmar and Sri Lanka for future expansion. With all this success, Raffy thanks his father for teaching him the value of determination. And his advice for future entrepreneurs? “Your business should be your biggest love,” he says.

“Your business should be your biggest love.”

Innovating Direct Selling TOMMANNY TAN, ME 2008 President and CEO, FERN, Inc. When Tommanny Tan graduated from De La Salle University – Manila (Bachelor of Science, Computer Science) in 1990, leading FERN, Inc to where it is now was farthest from his mind. Although Tan came from a family of entrepreneurs involved in international trade of consumer goods and electronics, his interest at the time was with programming and honing his computer skills. Still, when Tan eventually took over the family’s import and manufacturing business, his sharp, natural business acumen was immediately evident. Tan was able to implement operational changes that boosted productivity, immediately increasing production efficiency thirty-fold. In 2003, even without any prior knowledge about direct selling or network marketing, Tan joined a colleague in a business that distributed clothes, shoes, beauty products, and a “nonacidic” form of vitamin C. As Tan learned the business, he saw that although there was viable business in all products, the vitamin C had the most potential. The company, Filipino Entrepreneurs and Resources Network (or FERN, Inc), encountered financial difficulties in 2004. Rather than leaving the company, Tommanny Tan saw this as an opportunity to take over. Taking over as President and CEO in 2005, Tan scrapped all other products, and left FERN-C, the Non-Acidic Vitamin C, as FERN’s sole product. Since FERN-C was a pioneer in non-acidic vitamin C, there were many difficulties with acceptance. Tan solved different issues related to accreditation, approval, and acceptance of the product, lobbying the FDA to acknowledge “sodium ascorbate” as a legitimate generic name for vitamin C. Tan then relied on a handful of loyal networkers to market and sell FERN-C.

From decline and impending bankruptcy in 2004, FERN, Inc steadily rose throughout the years, even breaching the P1 Billion mark (in annual sales) in 2008. Today, FERN has 10 locations all over the Philippines, over 200 competent employees, and 1 Million FERN members. The company’s success served as the sign to introduce other innovative health products to the Philippine Market. In 2008, FERN-Slim, a safe and all-natural weight control supplement was launched. In 2010, FERN introduced FERNCoffee, the coffee blend with 8 nutrients. Soon after, a rose hip joint supplement powder, FERN i-flex, followed. As an industry leader in the Philippines, FERN, Inc. was set to expand operations internationally. In 2012, FERN took off as a major international competitor through the inception of i-fern—the company’s global wing. With i-fern, Tan envisions that soon, the Filipino will be known and respected as excellent entrepreneurs worldwide.

For his achievements as an exceptional businessman in the service of the Filipino, Tan has been featured in one of the country’s leading publications, and has received prestigious awards including the prestigious ERNST and YOUNG Emerging Entrepreneur of the Year (Philippines, 2012) and as a PLDT SME Nation’s MVP Bossing Award (also in 2012). As a Go Negosyo advocate, Tan believes in “changing lives one at a time.” He has faith that entrepreneurship can uplift Filipinos as he has changed the image of direct selling through FERN, Inc., and continues to promote healthy living and entrepreneurship among its members. Source: Businessworld Online