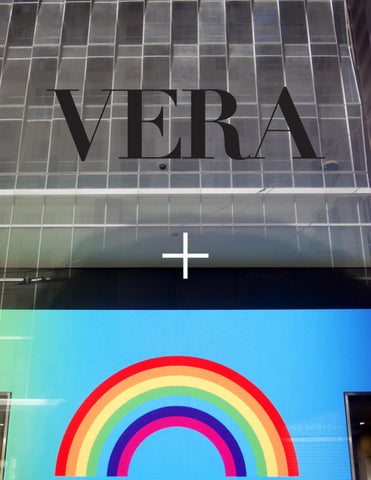 The character Mrs. Vera was created by Michael Johnstone and David Faulk. As a group they are called Verasphere.

Two Men and a Mrs. Vera Artists David Faulk and Michael Johnstone Invite Us to Escape into the Outrageous Universe of the Verasphere by Hank Trout

irst, there’s Mrs. Vera. Insanely colorful, impossibly imaginative, impeccably coifed and couture’d— even if her hat and clothes appear to be made from debris hot-glued onto the sixties’ most unforgivable fashions, they are impeccably put together nonetheless. She is tall, and ageless, befitting her status as a genderchallenged goddess or maybe a visiting dignitary from an unknown galaxy. She is not a stage persona; there is no “act,” no “schtick.” Labels like “drag” or “camp” merely limit her. She transcends labels. She just is—an unnatural force of nature. She commands your attention. And then there’s Michael, with the camera, sometimes, in years past, wearing “just something I’d throw on, like a miniskirt and a fake fur,” documenting Mrs. Vera’s excursions into public places, or into nature, “to lend a more incidental quality to the photo sessions.” One of their favorite locales is Golden Gate Park, where they have shot many photographs together. And mesmerized strangers. Once, a busload of Japanese businessmen unknowingly came upon Mrs. Vera and Michael in the Park’s Dahlia Garden. The entire busload of men lined up single-file to have a photograph taken with her, individually, perfectly queued and patient and quite thrilled to be having what they figured was just an everyday event in wacky San Francisco. Mrs. Vera is indeed a quintessentially San Francisco experience. For David Faulk (“Mrs. Vera”) and Michael Johnstone, it might well have been just another day in the Park. The pair began creating art together in 1994. David utilizes the painting skills he honed at Syracuse University to transform Mrs. Vera’s face with each appearance, each costume, approaching Mrs. Vera’s face as a painting, not a mimetic make-up job. And he has always loved having an

Audience. The way he pronounces the word “Audience” demands that it be capitalized. He gives his Audience a new painting/face every time Mrs. Vera ventures out. David creates all the costumes that Mrs. Vera wears. His favorite sources for the base materials are the thrift shops in San Francisco. He loves outrageously colored sixties-style clothes and over-the-top hats that he can redecorate in his rule-disregarding more-is-more throw the kitchen sink and lots of plastic at it aesthetic. David constantly accumulates things that might end up as part of a costume some time. Plastic eating utensils, pom-pom balls, plastic cups and straws, feather dusters, plastic gems, old game pieces, small toys all have gone into making up a Mrs. Vera original. David said he “let[s] the materials go where they want.” He often uses the simplest of components—hula hoops, for instance. Things that are collapsible are especially useful for storage purposes. Michael had no formal education in the arts, but has been making puppet shows since his early childhood in Edinburgh, Scotland, where he loved attending the yearly Edinburgh Festival and the Fringe Festival. Michael told me that he once received a ping-pong table for Christmas and, having no interest in ping-pong, turned the paddles into puppets. With his puppets and, years later, his love of photography and moving pictures, he honed his visual sense of storytelling early. There is always some backstory in the photos that only Mrs. Vera knows; she has clearly had a past, but she’s not telling. For both David and Michael when they started out, photographing Mrs. Vera in “Snapshots” provided necessary relief from the burdens of the epidemic. Both had been active members of creative, vibrant groups of artists, drag queens, club performers, theater people and other

groups whose members succumbed to the epidemic.

Creating Mrs. Vera and shaping the experiences that

participants in this past June’s Pride, marching in the

Mrs. Vera could instigate created ways for David and

outrageous costumes and hats they had made in workshop.

Michael “not to dwell on all the loss” going on around

The pair really enjoy the workshops for the great diversity

them; for the Audience, it was an opportunity to

of people who attend and then march—young teen lesbians,

participate in a distracting, transformative experience.

couples or single mothers and their child, older folks, anyone

Even when David and Michael themselves experienced

with a creative streak and a taste for the absurd and surreal.

medical problems related to being HIV-positive,

Besides the photos, the costumes and the archives, it may

Mrs. Vera magically gave everyone permission to be

be that Mrs. Vera’s and Michael’s greatest contributions have

silly and outrageous, with Michael there to make the

been simply the exuberant joy they seem to foment wherever

photographs, to bear witness and make art of it.

they go—LGBT events such as street fairs, parades, festivals,

The two have grown, together as partners and as

artists. Verasphere is a multi-platform, multi-faceted

SPCA, the San Francisco Public Library Bookmobile or the

LGBT Center. “It is almost an ambassadorial role at times,”

archives the pair’s work, including the Mrs. Vera’s

Michael has written, “to remind people of the eccentric

aspects of queer life, both now and in another time. We

life, alienation, magic and survival—with a spirit of fun

have rewoven the torn fabric of community and created a

participation and lots of color; photos from their many

tribe, encouraging people from all walks of life to join in

and celebrate simply being.”

and a June 2013 exhibit of costumes and photographs

Michael and Mrs. Vera consider themselves to be direct

at the Mills College Art Museum; “Lost/Found,” a short

descendants of the outrageous 1970s theatrical troupe the

film they made for the Frameline Film Festival 2012;

Cockettes, “turning up impromptu in many places, both

and a very successful exhibit at the Oakland Museum

In so many ways—with their archives and exhibits; with

their impromptu “Daybook” shoots; with their design-your-

and with others walked the catwalk in a fashion show of

own workshops and event appearances; with their online

David’s creations for Mrs. Vera at the Beautiful Rebels

presence—these two men and Mrs. Vera are still out there,

Fashion Show, in conjunction with the Jean-Paul

giving people permission to be silly and outrageous, still

encouraging us not to dwell on loss and gloom, inviting

The Verasphere website includes a video of the catwalk

us to participate in larger-than-life silliness. Mrs. Vera’s

show. More current photos and other content can be

might be the perfect antidote to the stormy future we face

one of the more ambitious members of the Verasphere

group created a Flickr page with over 3,000 images of Mrs. Vera and other members of Verasphere. Recognizing the uniqueness of David’s and Michael’s work, the James C. Hormel LGBTQIA Center at the San Francisco Public Library maintains the Verasphere Costume Archive. Some of those costumes were included in the Library’s exhibit, “Celebrating

You can further your exploration of Verasphere at www.Verasphere.com, move on their Facebook group at www.facebook.com/Verasphere, and immerse yourself in images of Mrs. Vera and her disciples at www.flickr.com/ groups/Verasphere.

the Past/Creating the Future” which ran from April 16 to August 7, 2016. The archive is housed on the third

Hank Trout is an Editor-at-Large for A&amp;U: America’s

floor of the SFPL Main Library.

AIDS Magazine. His writing, and the best HIV/AIDS-

Expanding Mrs. Vera’s reach into the universe, David and Michael hold workshops for hat- and

related writing, can be found at www.AUMag.org. Free subscriptions are available.

costume-making at the San Francisco LGBT Center and in Oakland. (Workshops for Pride 2017 will be announced on their website.) The workshops before

Reprinted with permission of the author from A&amp;U: America’s AIDS Magazine, March 2017

Celebrating 20 years of Verasphere at the San Francisco Pride Parade, Sunday, June 25, 2017. The character Mrs. Vera was created by Michael Johnstone and David Faulk. As a group they are called Verasphere. Photographs by Roger Arvid Anderson www.RogerArvidBooks.com