Commuting and Galway city from a Suburban & Regional rev june 2016 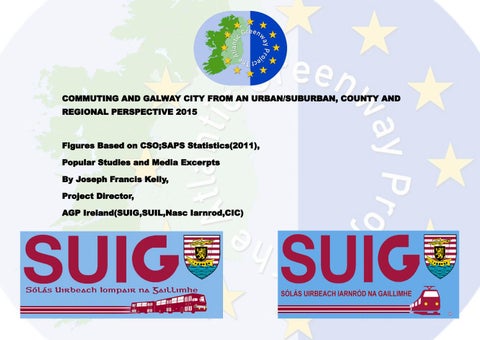 COMMUTING AND GALWAY CITY FROM AN URBAN/SUBURBAN, COUNTY AND REGIONAL PERSPECTIVE 2015

As there are Four Main Commuter Nodes of Galway City these are adequate points of reference as the four main entry points of inward commuting traffic into Galway City on a daily basis. The four main nodes are based on the fringes of the City- Oran Mor, Baile Chlรกir, Maigh Cuilinn, Bearna and the surrounding District Electoral Divisions outward have been counted via the Small Area Population Statistics C.S.O. ,these entry points validate the commuting numbers which have been under examination by many stakeholders and institutions over the past few decades. To validate the introduction of a socially comprehensive, economically fair and environmentally friendly transport proposal . The public transport option which the AGP Ireland will promote and devote to applying a lifesaving catalyst for the People of Galway County and City is the Sรณlรกs Uirbeach Iompair na Gailliimhe Light Rail/Bus Rapid Transit System. To highlight the four entry points of congestion from inward traffic will be represented individually to present an ingestible understanding for the reader in addition there will be Media Reports which validate the numbers. All number are calculated and contrived from CSO Census 2011 Small Area Population Maps with the Layer District Electoral Division and Commuting Statistics, I have chosen the options of Four Wheeled , Fossil Fuel running vehicle ranging from Bus, Car, Car Passenger,Van, Lorry/Other all figure are available at this link; http://census.cso.ie/sapmap2011/Results.aspx?Geog_Type=ED&amp;Geog_Cod e=27060&amp;CTY=27#T11_1101 The browser will have navigate the SAPS Map on their personal knowledge to upload each District Electoral Division individually.

This is a Line/Stop representation of the SUIG system which aims to serve all spatial urban uses from Industrial, Commercial, Residential, Educational, Recreational and more..

All line functions and serving are explained within the text boxes annotated on the map. The Residential West and Working in the East interchange are also serviced within this system.

The initial macro design maps, out the linking of the tram lines initiated from all the main four commuter nodes in the hinterland of Galway City, with a view to :

• Eradicating Traffic Volumes • Providing Sufficient Infrastructure prior to Population Growth • Providing a Cheaper, Greener, Leaner Public Transport Solution • A system which will reap huge profits for the city when it has paid for itself in 6-7 years (77,048 daily commuters+Adult Day Return@€5=100million per annum) • Reducing the Carbon Footprint • Lowering and Stabilizing people&#39;s relative daily expenditure i.e. instead of fossil fuel purchase , frequent ticket purchase would be more

economical • Enhancing the likelihood of Galway becoming a Major example of a &quot;Green City&quot; • Attracting future investment of Foreign Direct Investment by providing less stressful infrastructure for the Labour force • Increasing the annual Tourist Numbers and further boosting the Local Economy • Encouraging Social Cohesion • Encouraging assimilation of Non-Nationals to Irish Culture • Service and Hospitality Sector Job Creation by the domino effect of this being built, All the while bringing the network to centre without compromising the Architectural Heritage of Galway City, due to these traits holding long term reciprocal factors that aid maintenance of the concept.

Commuting and Galway city from a Suburban & Regional rev june 2016 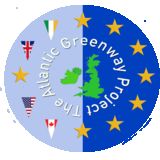