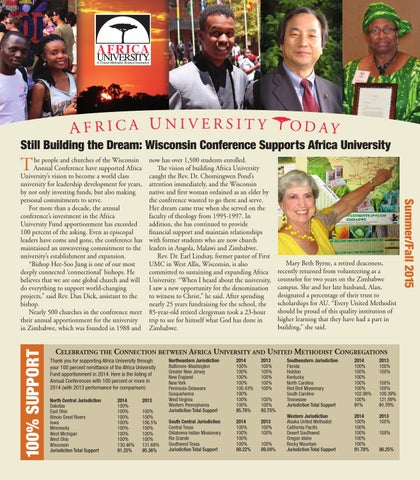 now has over 1,500 students enrolled. e vision of building Africa University caught the Rev. Dr. Chomingwen Pond’s attention immediately, and the Wisconsin native and ﬁrst woman ordained as an elder by the conference wanted to go there and serve. Her dream came true when she served on the faculty of theology from 1995-1997. In addition, she has continued to provide ﬁnancial support and maintain relationships with former students who are now church leaders in Angola, Malawi and Zimbabwe. Rev. Dr. Earl Lindsay, former pastor of First UMC in West Allis, Wisconsin, is also committed to sustaining and expanding Africa University. “When I heard about the university, I saw a new opportunity for the denomination to witness to Christ,” he said. After spending nearly 25 years fundraising for the school, the 85-year-old retired clergyman took a 23-hour trip to see for himself what God has done in Zimbabwe.

he people and churches of the Wisconsin Annual Conference have supported Africa University’s vision to become a world class university for leadership development for years, by not only investing funds, but also making personal commitments to serve. For more than a decade, the annual conference’s investment in the Africa University Fund apportionment has exceeded 100 percent of the asking. Even as episcopal leaders have come and gone, the conference has maintained an unwavering commitment to the university’s establishment and expansion. “Bishop Hee-Soo Jung is one of our most deeply connected ‘connectional’ bishops. He believes that we are one global church and will do everything to support world-changing projects,” said Rev. Dan Dick, assistant to the bishop. Nearly 500 churches in the conference meet their annual apportionment for the university in Zimbabwe, which was founded in 1988 and

Mary Beth Byrne, a retired deaconess, recently returned from volunteering as a counselor for two years on the Zimbabwe campus. She and her late husband, Alan, designated a percentage of their trust to scholarships for AU. “Every United Methodist should be proud of this quality institution of higher learning that they have had a part in building,” she said.

CELEBRATING THE CONNECTION BETWEEN AFRICA UNIVERSITY AND UNITED METHODIST CONGREGATIONS

he Paciﬁc Northwest Conference Jubilate! Choir Endowed Chair in Music at Africa University has awarded a grant of $10,000 for music training at AU during the 2015-2016 academic year. e ﬁrst annual distribution of funds from the endowed chair marks the realization of a long-held dream for the members of the Jubilate! Choir, which was organized by the annual conference 47 years ago. e choir made the pledge of an endowed chair in music at the oﬃcial opening of Africa University in Mutare, Zimbabwe in 1994. “e music of Africa has touched us so deeply,” said Patty Jones, a choir member and driving force behind the eﬀort. “To be able to know that training in music at Africa University will continue to grow through this chair is wonderful and exciting.” Over the past 20 years, choir members and local congregations in the Paciﬁc Northwest Annual Conference have regularly added to their original gift of $31,118 to fund the endowment. “is is the ﬁrst campaign that successfully utilized planned giving vehicles – two gift annuities, one life insurance designation and a will bequest – to meet its goal of $400,000.00,”

said Elaine Jenkins, director of planned giving in the Africa University Development Oﬃce. She noted that planned gifts accounted for more than half of the total funds raised for the endowed chair in music. “is endowment is an enduring legacy from the Paciﬁc Northwest Annual Conference for Africa University,” said Tom Richardson, director of four Jubilate! Choir tours to Africa University from 1992 to 2013. “e Dream is Alive is both a song and a reality [thanks to the endowment].”

Longtime friends and colleagues of Dr. Magnolia (Maggie) Jackson are working to honor her leadership contributions and voluntary service within and beyond e United Methodist Church by endowing a scholarship in her name at Africa University. Dr. Jackson is a professor emeritus at

Cleveland State University and former director of the school’s social work department. e scholarship endowment eﬀort is being spearheaded by the Rev. Dr. William L. McFadden, a fellow member of the East Ohio Annual Conference, who has served with Dr. Jackson on the Africa University Advisory Development Committee. e goal of the campaign is to invest $150,000 to provide the income for one annual scholarship in perpetuity for a student enrolled at the university. Launch gifts totaling more than $25,000 have already been received. For more information or to make a gift to the endowed scholarship fund in honor of Dr. Jackson, visit www.support-africauniversity.org.

Jubilate!, which began in 1978, has been the source of summer worship/arts events, world choir tours and currently the weekend workshops of the Jubilate! Worship Arts Institute, headed by the Rev. Carol Mariano. e Paciﬁc Northwest Conference Jubilate! Choir Endowed Chair in Music at Africa University remains open to contributions and planned gifts made through the Paciﬁc Northwest Conference Treasurer’s Oﬃce and the Africa University Development Oﬃce.

How You Can Help

How you can help... continued. support of Africa University’s operational budget, for costs such as utilities, equipment and faculty salaries.

Partnership with ALA to Strengthen Diversity

Africa University (AU) expects to increase the number of African countries comprising its student body through a partnership with the African Leadership Academy (ALA). e leadership academy is helping to enroll and ﬁnancially support academically talented African students at Africa University. ALA, the continent’s only pan-African high school, seeks to transform Africa by developing the next generation of African leaders. Professor Munashe Furusa, Africa University's vice chancellor, says the schools’ relationship is a rewarding one. “Our partnership with the African Leadership Academy (is) an ideal initiative and opportunity for Africa University to secure the brightest scholars from the academy and provide them with a quality education,” Furusa said. “We have a shared mission to develop leaders for Africa. …e partnership allows us

to maintain and enhance our diversity.” Six students sent by the academy currently are enrolled at AU. By 2017, AU anticipates an enrollment of 20 students from ALA. Shared goals, such as leadership development and fostering cooperation to create lasting positive change in Africa, are the foundation of the collaboration. “Our expectation is that they (the students) will be serious-minded individuals, ready to learn and excel in their studies so that they can rise and shine in their communities and give back to their nations,” said Soladoye Ajiboye, registrar of Africa University.

zequiel Marcos Nhantumbo is using his Africa University (AU) education to resolve major challenges in Mozambique. A 1996 graduate of AU, Nhantumbo was born in rural Mozambique, the ﬁfth of six children in a devout Methodist family. roughout his early life, Nhanthumbo’s parents struggled economically, but showed an abundance of faith. As a youth, Nhantumbo worked on the family farm, but he knew the only way to get ahead and secure his future was to earn his college degree. AU was his number one choice. “When I got to Africa University, I made the decision to major in agriculture and natural resources since I knew a great deal about farming,” he said. “It was important that I learn how to solve problems of food security for people in my own land.” He remembers his time at AU fondly. “As a student, lecturers conducted discussions on multi-cultural and multi-racial perspectives,”

Nhantumbo said. “What I particularly enjoyed was how the professors included students in their lectures. e fact that professors could learn a great deal from their students was a blessing!” Today, Nhantumbo is the representative of the Mozambique-Missouri Initiative with the United Methodist Church in Mozambique. “AU taught me how to be proactive, adaptable, a good communicator, respectful, resourceful, organized, and capable of initiating things. I will always be thankful to AU for instilling in me these keys to my success,” he said. He is putting his degree to good use. “rough infrastructure I have helped to create, congregations are worshipping in decent chapels; communities and churches are being supplied with potable water; malaria is on the way to being eradicated; and the majority of children and elderly people now have shelter, food and clothing,” Nhantumbo said.

Consider these additional ways of helping the university educate new leaders for the nations of Africa: Planned Gifts are the foundation for the long-term survival of Africa University. As you make your estate plans, consider leaving a gift or bequest to Africa University in your will. If you have already included the university in your estate plans, please let us know so we may welcome you to the Richard E. “Dick” Reeves Legacy Society. Usahwira—This word in the Shona language means “a beautiful friendship.” Encourage your local church to become a partner with Africa University by supporting one student at the university for four years. The annual cost of supporting one undergraduate student is just under $6,000. Local churches may provide full or partial scholarships. Endowment Fund—Give to the Africa University Endowment Fund (World Service Special Gift #03-0188). The interest income from the endowment provides scholarships for our students. For more information about giving opportunities or to make a gift, visit us at support-africauniversity.org. To learn about Africa University and its impact, visit africau.edu. Let’s work together to continue the transformation of lives and of Africa. To order resources to help tell the story of the Africa University Fund apportionment, visit umcgiving.org or infoserv.um.org. Or, call United Methodist Communications, toll-free (888) 346-3862, during normal business hours. Available resources include: • Africa University: A Place of Peace, Learning and Hope DVD (600115) • Africa University Fund: Pieces of the Dream DVD (600512) • We are Africa University (600611) Africa University Development Office P.O. Box 340007 Nashville, TN 37203-0007 (615) 340-7438 audevoffice@gbhem.org www.support-africauniversity.org

heryl LaTanya Walker is in her 11th year as Director of African American Ministries at Discipleship Ministries, formerly the General Board of Discipleship. Her portfolio includes leadership formation and resource development. A ﬁlm project produced under her leadership, Reﬂect, Reclaim, Rejoice: Preserving the Gift of Black Scared Music, won a regional Emmy for best documentary. Born in Chicago, and a third generation United Methodist, Cheryl has always been active in congregations where she held membership – Fernwood UMC in Chicago and Ben Hill UMC in Atlanta, her current church. Cheryl earned a bachelor’s degree in psychology and master’s degree in counseling from Chicago State University. Because of her

life-long activism within the denomination, she received an Honorary Doctorate of Humane Letters from Gammon eological Seminary/Interdenominational Center in May 2014. Cheryl’s involvement with AU began in 1991 when she chaired the missions work area at Ben Hill. She led a Volunteer in Mission team to Kenya and Zimbabwe in 1992 and became an outspoken and eﬀective advocate for AU. Partly in response to her advocacy, Ben Hill built a dormitory on campus in 2002 for female students. Cheryl has been a member of the AU Advisory Development Committee since 1998, cultivating friends and raising funds. In 2002, she was one of the ﬁrst to make a planned gift to the university, designating AU the beneﬁciary of a life insurance policy. “Africa University is a place where dreams and hopes

are being realized every day, not only for Africa but also for the world. I am proud to be a part of this transforming institution,” Cheryl said. Elaine Jenkins, Director of Planned Giving 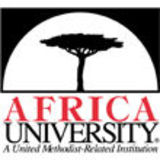