Terms of participation and contest rules « FrancoQuiz - Artisans at Work » 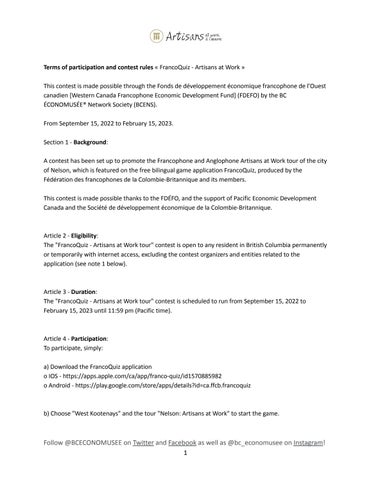 Terms of participation and contest rules « FrancoQuiz - Artisans at Work » This contest is made possible through the Fonds de développement économique francophone de l&#39;Ouest canadien [Western Canada Francophone Economic Development Fund] (FDEFO) by the BC ÉCONOMUSÉE® Network Society (BCENS). From September 15, 2022 to February 15, 2023. Section 1 - Background: A contest has been set up to promote the Francophone and Anglophone Artisans at Work tour of the city of Nelson, which is featured on the free bilingual game application FrancoQuiz, produced by the Fédération des francophones de la Colombie-Britannique and its members. This contest is made possible thanks to the FDÉFO, and the support of Pacific Economic Development Canada and the Société de développement économique de la Colombie-Britannique.

Article 2 - Eligibility: The &quot;FrancoQuiz - Artisans at Work tour&quot; contest is open to any resident in British Columbia permanently or temporarily with internet access, excluding the contest organizers and entities related to the application (see note 1 below).

c) Participate in the draw by sharing (see note 2 below) the score at the end of the tour. All scores are accepted.

Participants have the option to: o Share their score privately: by Facebook, Twitter or Instagram direct message to BC ÉCONOMUSÉE® using the share button or directly by email to britishcolumbia@economusees.com, especially for participants who do not have a social media account. Each participant&#39;s name will be entered once (see note 3 below) in the drawing. o Or share their score publicly: on the Facebook news feed by adding the mention @BCECONOMUSEE, on a tweet by adding the mention @BCECONOMUSEE or on an Instagram post by adding the mention @bc_economusee. The entrant&#39;s name will be entered 2 times (see note 4 below) into the draw. The number of entries is not cumulative. The maximum number of entries per person is two. Participants will be contacted by the BCENS and invited after sharing their score to share their contact information through a short questionnaire.

Article 7 - Designation of winners: Winners will be determined by random drawing via the Spin The Wheel app. Participants who have shared their score publicly will have their name entered twice in the drawing, other participants will have their name entered once in the drawing. Article 8 - Claiming the prizes: In order to be declared a winner, any person selected at random must: Comply with the eligibility and participation requirements set forth in these rules; Have answered all the questions of the &quot;Artisans at Work&quot; tour. Winners will be notified directly after the draws by email or telephone. If BCENS is unable to contact the winner within seven days of the announcement of the result, the prize may automatically be put back into play. It is the entrant&#39;s responsibility to provide a valid email address or working phone number and to be available for contact during this period. Any minor selected in the draw (under 18) must contact their legal guardian to claim the prize.

Article 9 - Languages: In the event of a discrepancy between the French and English versions of these rules, if applicable, the French version shall prevail.

Section 10 - Limitation of Liability: BCENS reserves the right to shorten, extend, modify or cancel the contest for any reason, without liability. Limitation of liability related to the Internet: BCENS shall not be held liable for any difficulties or impossibilities of participants&#39; connections to the Internet: connection to the FrancoQuiz application, knowledge and acceptance by participants of the characteristics and limits of the Internet, technical performance, response times for consulting, querying or transferring information, risks of interruption, and more generally, the risks inherent in any connection and transmission on the Internet, the lack of protection of certain data against possible hijacking, and the risks of contamination by any computer viruses circulating on the network. Any evolution or change of the application may lead to an update and/or a temporary unavailability of the application, which does not engage in any way the responsibility of the BCENS. If for any reason the Contest is not capable of running as planned due to bugs, tampering, outside intrusion into the computer system, fraud, or technical failures or any other cause beyond the control of BCENS that corrupt or affect the administration, security, fairness or proper conduct of the Contest, then BCENS reserves the right, in its sole discretion, to cancel, modify, suspend or terminate the Contest immediately, without liability to any entrant.

BCENS cannot be held responsible for any malfunctions related to the Internet itself or related to any intrusion, attempted intrusion or fraud that may cause failures in the administration, security, fairness, integrity or management of the Game.

BCENS cannot be held responsible for any errors, omissions, interruptions, loss of email and more generally, the loss of any data as a result.

BCENS cannot be held responsible for the congestion of the Internet network, the quality of the Internet users&#39; equipment, or the quality of their access mode, which could have repercussions on the time required to send answers or on the connection time required to participate. Thus, the company cannot be held responsible if the electronic entry forms are not registered, incomplete, or impossible to verify.

Terms of participation and contest rules « FrancoQuiz - Artisans at Work »