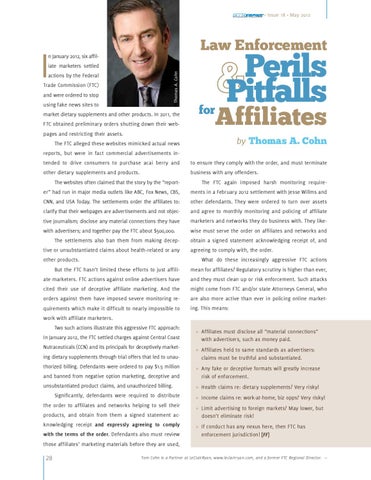 market dietary supplements and other products. In 2011, the FTC obtained preliminary orders shutting down their webpages and restricting their assets.

by Thomas A. Cohn

The FTC alleged these websites mimicked actual news reports, but were in fact commercial advertisements intended to drive consumers to purchase acai berry and

to ensure they comply with the order, and must terminate

other dietary supplements and products.

business with any offenders.

The websites often claimed that the story by the “report-

ments in a February 2012 settlement with Jesse Willms and

CNN, and USA Today. The settlements order the affiliates to:

other defendants. They were ordered to turn over assets

clarify that their webpages are advertisements and not objec-

and agree to monthly monitoring and policing of affiliate

tive journalism; disclose any material connections they have

marketers and networks they do business with. They like-

wise must serve the order on affiliates and networks and

obtain a signed statement acknowledging receipt of, and agreeing to comply with, the order. What do these increasingly aggressive FTC actions

other products. But the FTC hasn’t limited these efforts to just affili-

mean for affiliates? Regulatory scrutiny is higher than ever,

and they must clean up or risk enforcement. Such attacks

cited their use of deceptive affiliate marketing. And the

might come from FTC and/or state Attorneys General, who

orders against them have imposed severe monitoring re-

are also more active than ever in policing online market-

quirements which make it difficult to nearly impossible to

work with affiliate marketers. Two such actions illustrate this aggressive FTC approach: In January 2012, the FTC settled charges against Central Coast Nutraceuticals (CCN) and its principals for deceptively marketing dietary supplements through trial offers that led to unauthorized billing. Defendants were ordered to pay $1.5 million

»» Affiliates must disclose all “material connections” with advertisers, such as money paid. »» Affiliates held to same standards as advertisers: claims must be truthful and substantiated.

and banned from negative option marketing, deceptive and

»» Any fake or deceptive formats will greatly increase risk of enforcement.

Significantly, defendants were required to distribute

the order to affiliates and networks helping to sell their

products, and obtain from them a signed statement acknowledging receipt and expressly agreeing to comply with the terms of the order. Defendants also must review

»» If conduct has any nexus here, then FTC has enforcement jurisdiction!

those affiliates’ marketing materials before they are used,

Tom Cohn is a Partner at LeClairRyan, www.leclairryan.com, and a former FTC Regional Director.

Issue 18 of FeedFront Magazine, the official magazine of Affiliate Summit. This issue of FeedFront Magazine includes Dress for the Job You Want by Shawn Collins, Ten Tips for HEO: Healthy Eating Optimization by Heather Romiti, Law Enforcement Perils and Pitfalls for Affiliates by Thomas A. Cohn, and What SOPA Means for Affiliate Marketing’s Future by Brook Schaaf. Also automation, better affiliate newsletters, FTC bizopp rule, optimizing queries, smooth business travel, USA vs. Europe in affiliate marketing, behind the scenes of the Affiliate Ball, and more. 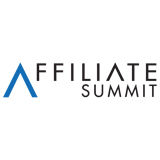