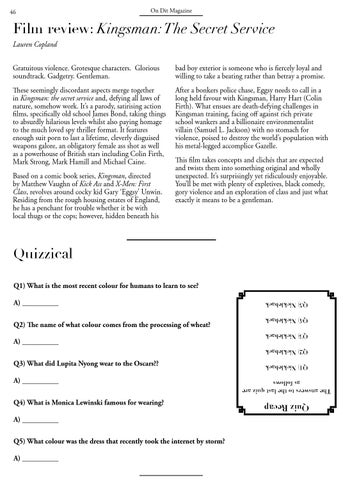 bad boy exterior is someone who is fiercely loyal and willing to take a beating rather than betray a promise.

After a bonkers police chase, Eggsy needs to call in a long held favour with Kingsman, Harry Hart (Colin Firth). What ensues are death-defying challenges in Kingsman training, facing off against rich private school wankers and a billionaire environmentalist villain (Samuel L. Jackson) with no stomach for violence, poised to destroy the world’s population with his metal-legged accomplice Gazelle.

Based on a comic book series, Kingsman, directed by Matthew Vaughn of Kick Ass and X-Men: First Class, revolves around cocky kid Gary ‘Eggsy’ Unwin. Residing from the rough housing estates of England, he has a penchant for trouble whether it be with local thugs or the cops; however, hidden beneath his

This film takes concepts and clichés that are expected and twists them into something original and wholly unexpected. It’s surprisingly yet ridiculously enjoyable. You’ll be met with plenty of expletives, black comedy, gory violence and an exploration of class and just what exactly it means to be a gentleman.

Quizzical Q1) What is the most recent colour for humans to learn to see?

Q2) The name of what colour comes from the processing of wheat?

Q4) What is Monica Lewinski famous for wearing?

The answers to the last quiz are as follows

Q3) What did Lupita Nyong wear to the Oscars??