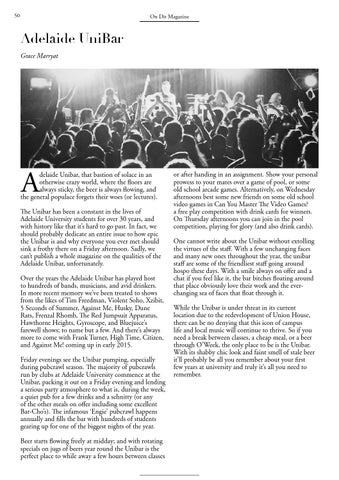 delaide Unibar, that bastion of solace in an otherwise crazy world, where the floors are always sticky, the beer is always flowing, and the general populace forgets their woes (or lectures). The Unibar has been a constant in the lives of Adelaide University students for over 30 years, and with history like that it’s hard to go past. In fact, we should probably dedicate an entire issue to how epic the Unibar is and why everyone you ever met should sink a frothy there on a Friday afternoon. Sadly, we can’t publish a whole magazine on the qualities of the Adelaide Unibar, unfortunately. Over the years the Adelaide Unibar has played host to hundreds of bands, musicians, and avid drinkers. In more recent memory we’ve been treated to shows from the likes of Tim Freedman, Violent Soho, Xzibit, 5 Seconds of Summer, Against Me, Husky, Dune Rats, Frenzal Rhomb, The Red Jumpsuit Apparatus, Hawthorne Heights, Gyroscope, and Bluejuice’s farewell shows; to name but a few. And there’s always more to come with Frank Turner, High Time, Citizen, and Against Me! coming up in early 2015. Friday evenings see the Unibar pumping, especially during pubcrawl season. The majority of pubcrawls run by clubs at Adelaide University commence at the Unibar, packing it out on a Friday evening and lending a serious party atmosphere to what is, during the week, a quiet pub for a few drinks and a schnitty (or any of the other meals on offer including some excellent Bar-Cho’s). The infamous ‘Engie’ pubcrawl happens annually and fills the bar with hundreds of students gearing up for one of the biggest nights of the year. Beer starts flowing freely at midday; and with rotating specials on jugs of beers year round the Unibar is the perfect place to while away a few hours between classes

or after handing in an assignment. Show your personal prowess to your mates over a game of pool, or some old school arcade games. Alternatively, on Wednesday afternoons best some new friends on some old school video games in Can You Master The Video Games? a free play competition with drink cards for winners. On Thursday afternoons you can join in the pool competition, playing for glory (and also drink cards). One cannot write about the Unibar without extolling the virtues of the staff. With a few unchanging faces and many new ones throughout the year, the unibar staff are some of the friendliest staff going around hospo these days. With a smile always on offer and a chat if you feel like it, the bar bitches floating around that place obviously love their work and the everchanging sea of faces that float through it. While the Unibar is under threat in its current location due to the redevelopment of Union House, there can be no denying that this icon of campus life and local music will continue to thrive. So if you need a break between classes, a cheap meal, or a beer through O’Week, the only place to be is the Unibar. With its shabby chic look and faint smell of stale beer it’ll probably be all you remember about your first few years at university and truly it’s all you need to remember.