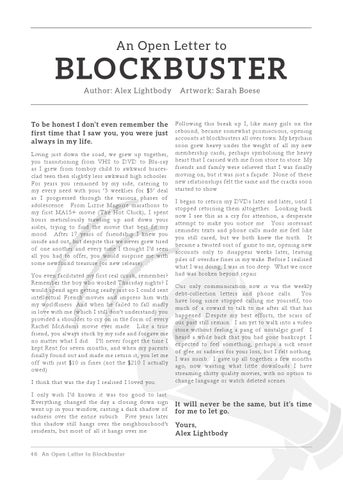 An Open Letter to

To be honest I don’t even remember the first time that I saw you, you were just always in my life. Living just down the road, we grew up together, you transitioning from VHS to DVD to Blu-ray as I grew from tomboy child to awkward bracesclad teen then slightly less awkward high schooler. For years you remained by my side, catering to my every need with your ‘5 weeklies for $5’ deal as I progressed through the various phases of adolescence. From Lizzie Maguire marathons to my first MA15+ movie (The Hot Chick), I spent hours meticulously trawling up and down your aisles, trying to find the movie that best fit my mood. After 17 years of friendship I knew you inside and out, but despite this we never grew tired of one another and every time I thought I’d seen all you had to offer, you would surprise me with some newfound treasure (or new release). You even facilitated my first real crush, remember? Remember the boy who worked Thursday nights? I would spend ages getting ready just so I could rent intellectual French movies and impress him with my worldliness. And when he failed to fall madly in love with me (which I still don’t understand) you provided a shoulder to cry on in the for m of every Rachel McAdams movie ever made. Like a true friend, you always stuck by my side and forgave me no matter what I did. I’ll never forget the time I kept Rent for seven months, and when my parents finally found out and made me return it, you let me off with just $10 in fines (not the $210 I actually owed). I think that was the day I realised I loved you. I only wish I’d known it was too good to last. Everything changed the day a closing down sign went up in your window, casting a dark shadow of sadness over the entire suburb. Five years later this shadow still hangs over the neighbourhood’s residents, but most of all it hangs over me.

46 An Open Letter to Blockbuster

Following this break up I, like many girls on the rebound, became somewhat promiscuous, opening accounts at blockbusters all over town. My keychain soon grew heavy under the weight of all my new membership cards, perhaps symbolising the heavy heart that I carried with me from store to store. My friends and family were relieved that I was finally moving on, but it was just a façade. None of these new relationships felt the same and the cracks soon started to show. I began to return my DVDs later and later, until I stopped returning them altogether. Looking back now I see this as a cry for attention, a desperate attempt to make you notice me. Your incessant reminder texts and phone calls made me feel like you still cared, but we both knew the truth. It became a twisted sort of game to me, opening new accounts only to disappear weeks later, leaving piles of overdue fines in my wake. Before I realised what I was doing, I was in too deep. What we once had was broken beyond repair. Our only communication now is via the weekly debt-collection letters and phone calls. You have long since stopped calling me yourself, too much of a coward to talk to me after all that has happened. Despite my best efforts, the scars of our past still remain. I am yet to walk into a video store without feeling a pang of nostalgic grief. I heard a while back that you had gone bankrupt. I expected to feel something, perhaps a sick sense of glee or sadness for your loss, but I felt nothing. I was numb. I gave up all together a few months ago, now wasting what little downloads I have streaming shitty quality movies, with no option to change language or watch deleted scenes.

It will never be the same, but it’s time for me to let go. Yours, Alex Lightbody