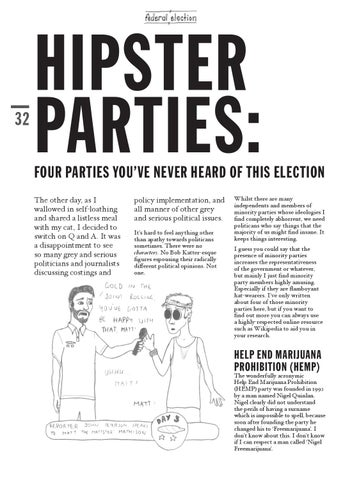 FOUR PARTIES YOU’VE NEVER HEARD OF THIS ELECTION The other day, as I wallowed in self-loathing and shared a listless meal with my cat, I decided to switch on Q and A. It was a disappointment to see so many grey and serious politicians and journalists discussing costings and

policy implementation, and all manner of other grey and serious political issues. It’s hard to feel anything other than apathy towards politicans sometimes. There were no characters. No Bob Katter-esque figures espousing their radically different political opinions. Not one.

Whilst there are many independents and members of minority parties whose ideologies I find completely abhorrent, we need politicans who say things that the majority of us might find insane. It keeps things interesting. I guess you could say that the presence of minority parties increases the representativeness of the government or whatever, but mainly I just find minority party members highly amusing. Especially if they are flamboyant hat-wearers. I’ve only written about four of those minority parties here, but if you want to find out more you can always use a highly-respected online resource such as Wikipedia to aid you in your research.

The wonderfully acronymic Help End Marijuana Prohibition (HEMP) party was founded in 1992 by a man named Nigel Quinlan. Nigel clearly did not understand the perils of having a surname which is impossible to spell, because soon after founding the party he changed his to ‘Freemarijuana’. I don’t know about this. I don’t know if I can respect a man called ‘Nigel Freemarijuana’.