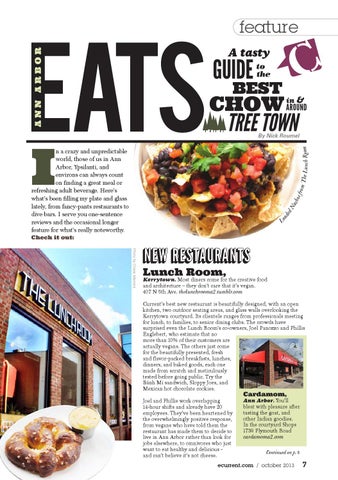 n a crazy and unpredictable world, those of us in Ann Arbor, Ypsilanti, and environs can always count on finding a great meal or refreshing adult beverage. Here’s what’s been filling my plate and glass lately, from fancy-pants restaurants to dive bars. I serve you one-sentence reviews and the occasional longer feature for what’s really noteworthy.

Check it out: Photo by Chase Masters

Kerrytown. Most diners come for the creative food and architecture – they don’t care that it’s vegan. 407 N 5th Ave. thelunchrooma2.tumblr.com Current’s best new restaurant is beautifully designed, with an open kitchen, two outdoor seating areas, and glass walls overlooking the Kerrytown courtyard. Its clientele ranges from professionals meeting for lunch, to families, to senior dining clubs. The crowds have surprised even the Lunch Room’s co-owners, Joel Panozzo and Phillis Englebert, who estimate that no more than 10% of their customers are actually vegans. The others just come for the beautifully presented, fresh and flavor-packed breakfasts, lunches, dinners, and baked goods, each one made from scratch and meticulously tested before going public. Try the Bánh Mi sandwich, Sloppy Joes, and Mexican hot chocolate cookies. Joel and Phillis work overlapping 14-hour shifts and already have 20 employees. They’ve been heartened by the overwhelmingly positive response, from vegans who have told them the restaurant has made them to decide to live in Ann Arbor rather than look for jobs elsewhere, to omnivores who just want to eat healthy and delicious and can’t believe it’s not cheese.

Ann Arbor. You’ll bleat with pleasure after tasting the goat, and other Indian goodies. In the courtyard Shops 1739 Plymouth Road cardamoma2.com Continued on p. 8

Guest chefs and volunteers bring farm-to-table in this innovative monthly breakfast salon. Sunward Cohousing, 424 Little Lake Dr. selmacafe.org Selma’s back. After four years in the home of founders Lisa Gottlieb and Jeff McCabe and a brief hiatus, Selma Cafe is now at Sunward Cohousing’s spacious and sunny community dining room. Selma is a breakfast party, featuring seasonal ingredients and locally produced food, served by guest chefs and hundreds of dedicated volunteers. The suggested donation of $12-15 helps local farmers build hoop houses and with other efforts. Selma Cafe is nationally known, boasting coverage from local media to the Seattle Times and Huffington Post. The community gathering provides what author Ray Oldenburg calls a “third place,” in addition to home and work; one essential for civic engagement. Not to mention a great breakfast. In September, Chefs Tammy Coxen and Dan Freidus served an “Inspired Corn Dog,” a polenta-wrapped breakfast sausage with a soft-boiled egg, maple-mustard sauce, and a side of greens, and an “Inspired Caramel Apple,” an apple bread pudding with caramel sauce, and cider syrup.

Go way out Pontiac Trail to a dilapidated shack, and stuff yourself silly with Ron’s St. Louis ribs, creamy mac ‘n’ cheese, and gooey brownies. 5850 Pontiac Trail, 665-4967 Ron Phillip is your typical, classically-Frenchtrained chef, who used to work with Ina Garten (“The Barefoot Contessa”), and then ran a critically acclaimed BBQ restaurant in New York City, before returning home to run Romanoff’s Catering, the kitchen of his late father, Roman Philipp. Today that place looks like a forgotten chicken shack. But – the food! Oh. My. God. This man not only knows what he’s doing, but is so friendly, hospitable, and full of stories, that you will want to visit again and again.

owned Liberty Street twins, one Italian and the other Mexican, will knock your socks off with offerings like goat cheesepistachio pizza, or small plate fish tacos. 341 E. Liberty St. isalita.com; maniosteria.com

Don’t miss out on the excellent side dishes, and say hello to Ron. If he has time, you’ll hear stories about his father and the presidential banquet, and he’ll show you the old press clippings on the kitchen wall.

opened a farm-to-table take out restaurant, and every dish is crafted with individual care, whether omnivore, vegetarian, or vegan. 1906 Packard St. eatannarbor.com

meat, this is your toy store, with “artisan” sausage and jerky, and perfect brisket. 1643 S. State St. bier-camp. com

This wild, ungainly takeout joint manages amazing barbecue and down-home comfort food. 97 Spring St., 483-8360 Biggie’s is another place with an unassuming facility, and solely provides take-out. But inside, they put out an abundance of hearty good food that will have you coming back. Ribs are massive and meaty, with a good bite, and the roasted chicken is simply amazing, perfectly seasoned, baked and falling off the bone. But the best thing are the sides: turnip greens, braised cabbage, fried okra, candied yams, sweet potato fries, red beans and rice, black eyed peas, mac ‘n’ cheese, peach cobbler, and either sweet potato or pecan pie. Portions are huge, prices are reasonable, and the service is earnest if not perfect. Biggie’s is the place to go with a group that wants to have a take-out picnic on a lazy,

TheCorner.Perhaps the coolest place in the County to hang out, eat an honest burger or veggie meal, and enjoy the incredible Ypsi Gypsy IPA. 720 Norris St., Ypsilanti. cornerbrewery.com

Red Rock. Someday I will manage to get there before this up-andcoming BBQ restaurant sells out of burnt ends.

The Wurst Bar. How can we not mention a place that sells both rattlesnake and bison, among its

The word “authentic” makes me want to climb walls. Invariably it’s used by some critic to discern “true” ethnic cuisine, like Mexican or Chinese, from some Americanized version. As Frank Zappa famously sneered, “Is that a real poncho, or is that a Sears poncho?” The word’s even got the Mexicans on the defensive, many who are now compelled to add the word “authentic” to their signage or menu, for fear of being regarded as something less. Because for some Midwesterners, the fact that an entire Mexican family moved here from Mexico, to cook Mexican recipes in a Mexican restaurant, still isn’t enough to make their food authentic. So worked up, even wrote a poem about it:

It’s not authentic, This Gringo knows ‘Cause I once ate In Mexico I had a taco From a street stand The finest taco In all the land It was authentic! This taco stand They had no ersatz Mariachi band It was authentic! With real food! Unlike the place In my neighborhood. The other cuisine that seems to get the rap of not being “authentic” is Chinese. Again, from all indications, these are restaurants that appear to have Chinese families cooking and serving Chinese food from a Chinese menu. But heaven forbid, if it’s somehow deemed “Americanized” – well, then:

It’s not authentic, I’ve got this down: ‘Cause I once ate In Chinatown I had some innards With crispy fish Not Moo Goo Gai Pan On a Walmart dish It was authentic! With real food! Unlike the place In my neighborhood. Continued on p. 12 ecurrent.com / october 2013   11

With food trends swirling about them, the Earle is steady as a rock, with the finest wine list and happy hour around. 121 W. Washington St. theearle.com Back in the day, the Earle was a jazz club, hosting A-list artists in its basement digs. Slowly it evolved into what it is today, a top-notch French and Italian restaurant with live jazz entertainment. It’s the perfect balance for a place that has remained constant and timeless, with continuity of menu items and personnel over thirty years or so, including co-owner Dennis Webster, Chef Shelly Caughey Adams, sommelier Steve Goldberg, and many servers. I worked a stint as a bartender, dishing up selections from the incredible wine list, free happy hour mussels, and the fresh, homemade bread. At the end of the night I brought that bread to my family. The Earle continued to play a role in my family history, from hosting our wedding reception, to the place where my wife announced to my astonished self that we were going to have a baby. Today the mussels are no longer free, but a mere $2.75. And that child is a tad more expensive.

Foo-foo places come and go; Old Town has 41 years of history, and the most comfortable vibe around. 122 W. Liberty St. oldtownaa.com My first experience with Old Town was as a college junior. My best friend’s roommate was hosting two friends from Denison College in Ohio, named Bart and Killer. Where else would us bad boys go, but to see Carole King at Hill Auditorium, before relaxing with a few pitchers at Old Town? Beer was flowing and peanut shells covered the floor. At one point, I was astonished to count $60 on the table for future pitchers, even though we were already quite toasted (that money would have bought 15-20 pitchers back then). Bart and Killer were fast talking raconteurs; and for some reason I cannot fathom, as we left the bar, each of our party of six passionately kissed a young woman at a neighboring table, under the appreciative gaze of her date. We got in Killer’s new car for the ride home, and the night went downhill from there. Let’s just say that in the morning, Killer was looking for a jug of bleach. But Carole King, she was pretty amazing, from what I can recall.

feature Wrapping It All Up – To Go Image by Elks Pratt Lodge, December 2007

Elks. The party starts late, with an

Again, these are places I’ve enjoyed, and those I’ve omitted I do not mean to slight. There are well over 500 restaurants in Washtenaw County and even a busy monkey can’t visit them all. This was meant as one man’s opinion, and one magazine’s guide. Go forth, eat, drink,

Located underneath the Latin-inspired fine dining restaurant LENA, Habana Cellar Lounge is A2’s only destination venue for salsa dancing. Every Thursday starting at 9:30pm, the lounge offers free Salsa dance instruction with everyone from beginners to experts welcome—but get there early. Rumor has it the line is usually out the door and around the block long before the dancing starts. Don’t forget to try their excellent margaritas and the South American-themed small plate menu, which are both as delicious as they sound. 226 S. Main Downtown. 734-994-2773. cafehabanas.com

High-quality food and beer is the name of the game at the Jolly Pumpkin Artisan Ales—combining fantastic food with unique and delicious homebrews, Jolly Pumpkin is one of the city’s best craft beer destinations. 16 different house-made ales are offered on draft with roughly another two dozen available by the bottle—all brewed at the Jolly’s production facility in Dexter. And with an eccentric menu that offers everything from custom burgers to truffle fries and even a chili tofu sandwich, we can confidently say that this place has something for everyone. Bottoms up! 311 S. Main St. 734-913-2730. jollypumpkin.com

Walking into Grizzly Peak is like stepping into a warm, rustic ski-lodge— casual and classy, Grizzly Peak features delicious home-brewed ales, a diverse menu of traditional pub-fare, and most importantly, a place for students and professionals alike to kick back. Their seven-barrel brewing system is viewable from the street or the dining room, signifying the importance that this establishment places on beer. Don’t forget to check out Old German, a ‘new’ bar in the basement that specializes in German style beers and food. 120 W. Washington St.  734-741-7325.  grizzlypeak.net

A2 isn’t usually a city associated with good barbecue—but for the last 5 years, Blue Tractor has been trying to change our great city’s reputation. From chili-ginger spare ribs to balsamic baked beans, Blue Tractor is churning out BBQ classics with a Michigan-twist that are slices of culinary heaven. And that’s not all—Blue Tractor also brews their own beers in house. Check out the award winners like Bearded Pig Pilsner, Bumper Crop IPA or one of their ever-changing cast of seasonal brews. 207 E. Washington St. 734-222-4095. bluetractor.net —GMK Special Section 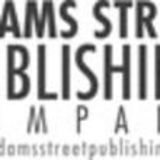 The best chow in A2

The best chow in A2