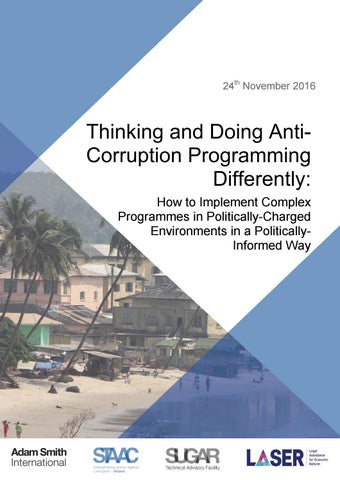 Thinking and Doing AntiCorruption Programming Differently: How to Implement Complex Programmes in Politically-Charged Environments in a PoliticallyInformed Way

Summary of Discussions and Conclusions This half-day roundtable discussion explored ways of applying politically-smart and adaptive methodologies to anti-corruption (AC) programming, and provided an opportunity to strengthen networks and identify ways to share knowledge across existing programmes. The discussion drew on lessons learned from three DFID-programmes: 1) Legal Assistance for Economic Reform (LASER); 2) Strengthening Action Against Corruption (STAAC) in Ghana; and 3) Strengthening Uganda’s Anti-Corruption Response - Technical Advisory Facility (SUGAR-TAF), focusing on three overarching questions: 1. How do we justify adaptation and experimentation in complex anti-corruption programming? 2. How do we go beyond traditional political economy analysis (PEA) and create a role for research? 3. How do we work with the political grain, finding pockets of effectiveness where politics and the anti-corruption agenda are aligned? Below is a brief summary of the main lessons learned and issues raised, during the roundtable discussion.

How do we justify adaptation and experimentation in complex anticorruption programming? Programmes adopting Problem Driven Iterative Adaptation (PDIA) place an emphasis on testing, learning, reflecting and changing approaches to tackle a development issue. This is particularly relevant for anti-corruption programmes that operate in complex, politically sensitive and continuously changing environments where a linear approach to implementing development programming is unlikely to have any significant impact. PDIA informed programmes typically entail flexible provision of technical assistance (TA) rather than money or equipment. The experience of LASER, one of DFID’s first programmes to adopt PDIA, is that it requires careful management of country partners’ expectations. This does not mean that time should be spent on explaining PDIA to country partners. Rather, programmes should demonstrate what PDIA means through providing support in line with partners’ needs and wants. LASER was able to do this by choosing its own institutional partners and having a flexible budget. PDIA is able to give country partners agency and voice often lacking in more traditional programmes. For LASER this helped establish trusted relationships, a prerequisite also for effective AC programming. PDIA should already be understood and incorporated in a meaningful way at the programme design stage. As experienced by STAAC, the conditions set for a programme may predetermine partners and activities while also requiring that the programme applies PDIA. This makes it a challenge for programmes to fully apply adaptive management as the parameters have already been set. Donors often look for ‘quick wins’ in the fight against corruption and expect programmes to be delivered according to predefined outputs and results frameworks. Neither is compatible with PDIA, something donors should take into account before embarking on this approach. They also need to have a certain appetite for experimentation and risk, balancing flexibility against accountability. Existing tools for holding service providers accountable need to be adjusted to PDIA, as a payment by results (PBR) can act as a deterrent for implementers to take risks. For LASER, this meant having a

hybrid contract with DFID. A third of fees were paid out on an output/non-PBR basis, with the remainder being paid against milestones/PBR. This gave LASER a certain level of flexibility to direct and redirect funds to the technical areas of greatest need with some results identified during the course of the programme in close coordination with country partners. A PDIA approach requires considerable trust and time to be invested between donor and service provider. Programme implementers also need time to learn and adapt to the needs of their partners and the political context as well as space to build trusting relationships with stakeholders. These added transactional costs may mean that conventional Value for Money (VfM) matrices are less well suited to PDIA. A fundamental principle of the PDIA approach is to make a number of small bets, continuing and potentially scaling up where a bet pays off and ending funding when they do not. This can present challenges to relationships with country partners, and at times it may be necessary to continue funding longer than we wanted to maintain positive relations. Nevertheless, implementers need to be prepared to have difficult conversations with country partners as well as donors when a bet does not pay off. Having too many failed bets is a risk to credibility and careful judgement should be exercised in managing this risk. However, LASERâ&#x20AC;&#x2122;s experience shows that when an investment is made over time to work, in an iterative manner, an understanding of what works and what does not emerges. In this sense, it is also critical to understand and learn from failure. Implementers therefore need to be open not only about successes, but also failures. Conversely this also means that donors need to encourage implementers to learn through trial and error, rather than punish failure.

How do we go beyond traditional PEA and create a role for research? The STAAC experience shows that it is the ability to gather and use tangible, operational information to guide decision making that enables the programme to be responsive at the operational and strategic level. An overly theoretical or technical approach to PEA would not be helpful. Programmes adopting a PDIA approach need to develop a procedure to gather and process information across the entire programme, from the micro to the macro level, and through formal as well as informal methods. In order for research to play a more prominent role in PEA there needs to be an alignment of the incentives of donors, service providers and researchers. Academic careers depend heavily on publishing journal articles based on in-depth and lengthy research. On the other hand, service providers are looking for researchers to apply their skills and knowledge to produce quick evidence that can feed into short-term decision making processes. The question then becomes how researchers can adapt their methodologies and approach to permit them to feed into the project, and how to ensure that this type of research also contributes to career development. Research needs to be viewed as a public good and a process rather than an end in itself. Incentives and methodologies notwithstanding, there is also a supply constraint in that there are a limited number of researchers who can bridge the research-programming divide. If there is to be greater involvement of researchers there will also be a need to develop the relevant capacities of academics. Corporate interests, the absence of a confidentiality clause (which a consultant would have had to sign) and concerns about intellectual property rights may also mean that service providers are less willing to give researchers full access to programme information. Access will ultimately depend on the willingness of donors to open up their programmes to researchers. Moving forward, a joint effort is necessary to unpack the type of research that would be most useful to collaborate on and to develop indicators to measure the impact of research within adaptive programming.

How do we work with the political grain, finding pockets of effectiveness where politics and the anti-corruption agenda are aligned? Participants noted that donors often attach a negative connotation to the term ‘politics’, rendering a dialogue about the politics around a programme difficult. Nonetheless, politics is an intrinsic element for the majority of programmes. Programmes need to work politically as there will be many actors that will try and block progress, particularly in the anti-corruption arena. Comprehending the underlying politics in a given context is also essential for understanding where pockets of effectiveness or reform willingness lie. This enables better informed small bets to be made and should feed into the overall decision making of a programme. Longer inception phases, investing sufficient time to understand in which sectors political will lies, as well as ‘no-go areas’ are vital to working politically. SUGAR-TAF’s unusually long inception phase (one year) granted by DFID proved extremely beneficial in this regard, as it enabled the programme to better understand Uganda’s patronage system, and identify the institutions where there were clear change agents. It also allowed for investing the necessary time in designing an innovative two-pronged approach to addressing corruption - complementing the support to the anti-corruption chain with a focus on ‘institutions under transformation’ where an alignment between political priorities and the anticorruption agenda exist. Working politically requires a different skillset than donors typically look for in consultants and that country partners expect, placing an emphasis on soft skills over technical expertise. This may also entail working with less experienced consultants not yet ‘set in their ways’, requiring programmes to invest in the capacity building of staff. DFID’s State Accountability and Voice Initiative (SAVI) programme is a successful example where a commitment to PDIA meant the programme invested considerable resources in developing its human capital – with attitude and approach of consultants at the outset being prioritised over their technical skills. If service providers are to continue to work politically they need to get better at convincing country partners and donors of the value of these soft skills. Given that there are potentially high risks and controversy around anti-corruption programmes, there will also need to be a commitment from both the donor and service provider to work politically – and to jointly accept the political risks associated with this way of working.

Concluding Session There is no silver bullet to tackling corruption, or for creating a space for meaningful collaboration between donors, service providers and researchers. Adopting PDIA and working politically is part of trying out different approaches to anti-corruption programming. The hope is that programmes such as LASER, STAAC and SUGAR will have a positive impact, with country partners appreciating and requesting more programmes of this type. There needs to be sufficient opportunities for research and learning to provide evidence on the impact of PDIA. Care needs to be taken, however, not to ‘fetishize’ PDIA or adaptive management, as the potential results rather than the methodologies are what ultimately matter. Researchers, donors and service providers need to get on with testing what works. External stakeholders, donors and service providers need to communicate better the successes, lessons and failures to allow second-generation PDIA programmes to learn from first-generation ones. This will also depend on relevant data being made available and accessible for future work as well as development practitioners creating the space necessary for researchers to contribute effectively. 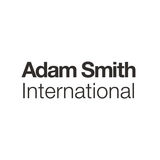