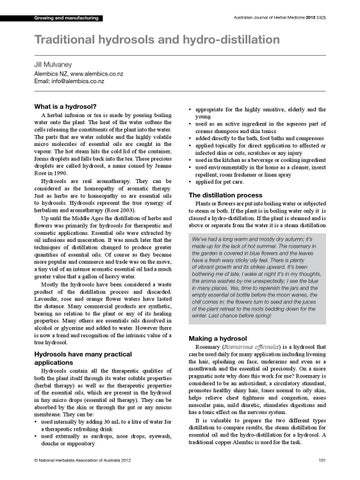 What is a hydrosol? A herbal infusion or tea is made by pouring boiling water onto the plant. The heat of the water softens the cells releasing the constituents of the plant into the water. The parts that are water soluble and the highly volatile micro molecules of essential oils are caught in the vapour. The hot steam hits the cold lid of the container, forms droplets and falls back into the tea. These precious droplets are called hydrosol, a name coined by Jeanne Rose in 1990. Hydrosols are real aromatherapy. They can be considered as the homeopathy of aromatic therapy. Just as herbs are to homeopathy so are essential oils to hydrosols. Hydrosols represent the true synergy of herbalism and aromatherapy (Rose 2003). Up until the Middle Ages the distillation of herbs and flowers was primarily for hydrosols for therapeutic and cosmetic applications. Essential oils were extracted by oil infusions and maceration. It was much later that the techniques of distillation changed to produce greater quantities of essential oils. Of course as they became more popular and commerce and trade was on the move, a tiny vial of an intense aromatic essential oil had a much greater value that a gallon of heavy water. Mostly the hydrosols have been considered a waste product of the distillation process and discarded. Lavender, rose and orange flower waters have lasted the distance. Many commercial products are synthetic, bearing no relation to the plant or any of its healing properties. Many others are essentials oils dissolved in alcohol or glycerine and added to water. However there is now a trend and recognition of the intrinsic value of a true hydrosol.

Hydrosols have many practical applications Hydrosols contain all the therapeutic qualities of both the plant itself through its water soluble properties (herbal therapy) as well as the therapeutic properties of the essential oils, which are present in the hydrosol in tiny micro drops (essential oil therapy). They can be absorbed by the skin or through the gut or any mucus membrane. They can be: • used internally by adding 30 mL to a litre of water for a therapeutic refreshing drink • used externally as eardrops, nose drops, eyewash, douche or suppository © National Herbalists Association of Australia 2012

• appropriate for the highly sensitive, elderly and the young • used as an active ingredient in the aqueous part of creams shampoos and skin tonics • added directly to the bath, foot baths and compresses • applied topically for direct application to affected or infected skin or cuts, scratches or any injury • used in the kitchen as a beverage or cooking ingredient • used environmentally in the home as a cleaner, insect repellent, room freshener or linen spray • applied for pet care.

The distillation process Plants or flowers are put into boiling water or subjected to steam or both. If the plant is in boiling water only it is classed a hydro-distillation. If the plant is steamed and is above or separate from the water it is a steam distillation We've had a long warm and mostly dry autumn; it’s made up for the lack of hot summer. The rosemary in the garden is covered in blue flowers and the leaves have a fresh waxy sticky oily feel. There is plenty of vibrant growth and its strikes upward. It’s been bothering me of late, I wake at night it’s in my thoughts, the aroma washes by me unexpectedly; I see the blue in many places. Yes, time to replenish the jars and the empty essential oil bottle before the moon wanes, the chill comes in; the flowers turn to seed and the juices of the plant retreat to the roots bedding down for the winter. Last chance before spring!

Making a hydrosol Rosemary (Rosmarinus officinalis) is a hydrosol that can be used daily for many application including livening the hair, splashing on face, underarms and even as a mouthwash and the essential oil preciously. On a more pragmatic note why does this work for me? Rosemary is considered to be an antioxidant, a circulatory stimulant, promotes healthy shiny hair, tones normal to oily skin, helps relieve chest tightness and congestion, eases muscular pain, mild diuretic, stimulates digestions and has a tonic effect on the nervous system. It is valuable to prepare the two different types distillation to compare results, the steam distillation for essential oil and the hydro-distillation for a hydrosol. A traditional copper Alembic is used for the task. 101

The still sits on a gas ring, the sterile beakers are ready to catch the distillate and the oil separators are clean and ready. A bowl of rye flour paste is prepared, a pH reader is used for taking regular pH readings of the hydrosol. The pot is 2/3 filled with water and is set to boil.

While the water comes to boil, the leaves are stripped off the stems and any damaged or woody parts of the plant are discarded. There is a fragrant pile of flowers and fresh sticky leaves. The twigs are set aside to dry. These can be used as skewers for kebabs or thrown in the pizza oven. While they are still pliable some are plaited for smudge sticks for cleansing. When the water is boiling the onion dome is carefully removed and approximately 500 g of the fresh flowers and leaves are placed in the 7 litres of boiling water. The onion dome is quickly replaced and the joins are sealed with the rye flour paste. It is important to prevent any steam from escaping as it has the bulk of the volatile essential oils especially in the first flush of steam. Why rye flour? Others have tried plumbers tape, silicon and putty. The copper becomes extremely hot during the process and will melt glues and plastic which invariably make a mess of the copper and are difficult to remove. The rye flour is organic and we are not introducing any synthetic complex chemicals. Although it bakes on firm it stays pliable enough to easily remove for a second distillation. It also keeps the copper clean. As the water comes to a rolling boil, it softens the cells of the rosemary leaves and flowers releasing the volatile essential oils and water soluble constituents. As the steam fills the onion dome and spirals, any particles 102

and dust will drop back into the water. The steam travels quickly along the copper pipes to the condenser bucket. The condenser bucket must have cool running water flowing through it during the entire process. This is to cool the coil so the steam condenses to become hydrosol. If the hydrosol feels warm, the coil is too hot and the flow of water needs to be increased. Water can be recirculated through a large big or trickling garden hose can be used into the bucket if water is in good supply. As the hydrosol begins to trickle out into the beaker, the garden is filled with the aroma of rosemary. A pH reading is taken then 100 mLs has been collected. A good hydrosol has flavour, aroma and a pH between 4.5 and 5.5. With 500 g of rosemary, only 500 mL of good hydrosol would be expected. Distillation is stopped when the pH levels (taken every 100 mL) start rising above the initial reading. At that point it will be mostly water. Flavour and aroma are also checked through the distillation. Less is mostly better than more however every distillation is different depending on the season, soil types, weather, moon, rain or sun. Nature is what makes distillation so interesting. The pH level of the final product has settled at 5.5, giving 500 mL of hydrosol with a constant pH and a strong, grassy, green, herby flavour of rosemary which is pleasant to taste. Rosemary distilled in the height of ÂŠ National Herbalists Association of Australia 2012

summer before it flowers, has an aroma predominantly of camphor and is quite unpleasant to taste. In this instance the aroma is sweet, grassy and pleasant to taste, suggesting it will be great in skin and hair care, and internal use. If the camphor is predominating it makes a useful decongestant, antiseptic and cooling skin tonic on hot days. Both types can be used to mist or be added to food at the last minute.

may indicate yeast and microbial blooms. The pH is retested and if it has risen from that on the label there may be microbial activity and the hydrosol is discarded. Provided the hydrosol has a pH between 4.5 and 5.5, is kept in a cool sterile dark place and in sterile containers it can be expected to last for at least 6 months and up to 12 months. This will vary depending on plant type. Plants can be distilled throughout the year with different results depending on the season. Eucalyptus in the middle of a hot dry summer yields double the essential oil compared to a winter distillation, but the winter distillation is softer and sweeter and even makes a pleasant addition to drinking water. The same applies to rosemary. Some plants have a barely noticeable sheen of essential oil – Melissa, kawa kawa, cornflowers, Calendula, rose and yet they are fragrant, acidic and have flavour. It is important to remember when doing a hydro-distillation that it’s not about achieving a high yield of essential oil, its about capturing the whole plant in balance.

References Rose J. 2003. Aromatherapy, essential oils & hydrosols: products of distillation. The Aromatic News. <www. aromaticplantproject.com/articles_archive/aromatherapy> accessed July 2012. Jill Mulvaney grew up on a New Zealand farm and after spending some time living abroad, moved to Waiheke Island in 1998. Whilst living in Perth WA, Jill set up and ran a natural skincare business for many years which found her importing raw materials, manufacturing and teaching. Jill and her partner are now both avid distillers of hydrosol, essential oils and spirits. They run workshops and demonstrations throughout NZ and sell alembic stills worldwide. They share the knowledge of this ancient process, using natural organic seasonal botanicals and beautiful handcrafted copper. www.alembics.co.nz.

If need be the hydrosol is poured into an oil separator flask. The small amount of collected oil is hardly worth separating and is usually left in the hydrosol.

Simply observing the distillation process gives an insight into how valuable and potent hydrosols are. In some way essential oil is the by-product of distillation, that which cannot be held in suspension. Hydrosols by their nature have a greater complexity than essential oils. Suzanne Catty describes them in her book Hydrosol’s, the next aromatherapy as 'holograms of the plant'. When the distillation is complete it is transferred to a clear glass sterile jars labelled with the plant type, date, moon phase, tide (if coastal), type of distillation and ph level. It is then decanted into 100 mL spray mister bottles or a 500 mL amber glass bottle for daily use. The bottles are checked for sediment or cloudiness which © National Herbalists Association of Australia 2012 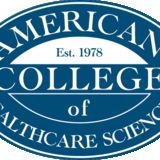