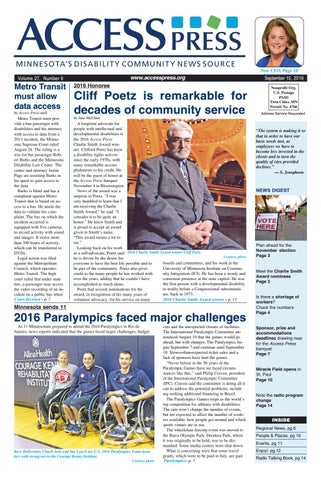 Metro Transit must provide a bus passenger with disabilities and his attorney with access to data from a 2013 incident, the Minnesota Supreme Court ruled August 24. The ruling is a win for bus passenger Robert Burks and the Minnesota Disability Law Center. The center and attorney Justin Page are assisting Burks in his quest to gain access to the data. Burks is blind and has a complaint against Metro Transit that is based on access to a bus. He needs the data to validate his complaint. The bus on which the incident occurred is equipped with five cameras, to record activity with sound and images. It stores more than 300 hours of activity, which can be transferred to DVDs. Legal action was filed against the Metropolitan Council, which operates Metro Transit. The high court ruled that under state law, a passenger may access the video recording of an incident on a public bus when Court decision - p. 7

Cliff Poetz is remarkable for decades of community service A longtime advocate for people with intellectual and developmental disabilities is the 2016 Access Press Charlie Smith Award winner. Clifford Poetz has been a disability rights activist since the early 1970s, with many remarkable accomplishments to his credit. He will be the guest of honor at the Access Press banquet November 4 in Bloomington. News of the award was a surprise to Poetz. “I was very humbled to learn that I am receiving the Charlie Smith Award,” he said. “I consider it to be quite an honor.” He knew Smith and is proud to accept an award given in Smith’s name. “This award means a lot to me.” Looking back on his work as a self-advocate, Poetz said 2016 Charlie Smith Award winner Cliff Poetz Courtesy photo he is driven by the desire for boards and committees, and his work at the everyone to have the best life possible and to University of Minnesota Institute on Commube part of the community. Poetz also gives nity Integration (ICI). He has been a steady and credit to the many people he has worked with consistent presence at the state capitol. He was over the years, adding that he couldn’t have the first person with a developmental disability accomplished as much alone. to testify before a Congressional subcommitPoetz had several nominations for the tee, back in 1973. award, in recognition of his many years of 2016 Charlie Smith Award winner - p. 15 volunteer advocacy, for his service on many

cuts and the unexpected closure of facilities. The International Paralympic Committee announced August 19 that the games would go ahead, but with changes. The Paralympics began September 7 and continue until September 18. Slower-than-expected ticket sales and a lack of sponsors have hurt the games. “Never before in the 56 years of the Paralympic Games have we faced circumstances like this,” said Philip Craven, president of the International Paralympic Committee (IPC). Craven said the committee is doing all it can to address the potential problems, including seeking additional financing in Brazil. The Paralympics Games reign as the world’s top competition for athletes with disabilities. The cuts won’t change the number of events, but are expected to affect the number of workers available, how people get around and which sports venues are in use. The wheelchair fencing event was moved to the Barra Olympic Park. Deodora Park, where it was originally to be held, was to be dismantled. Some media centers were shut down. What is concerning were that some travel grants, which were to be paid in July, are past Paralympics- p. 5

“The system is making it so that in order to have our basic needs met, as employees we have to become less invested in the clients and in turn the quality of care provided declines.” — S. Josephson

Plan ahead for the November election Page 3

Is there a shortage of workers? Check the numbers Page 4

Sponsor, prize and accommodations deadlines drawing near for the Access Press banquet Page 7

Access Press is Minnesota’s disability community newspaper, published since 1990 in a monthly print edition and online. We cover a broad range of disability-related issues and provide important information for Minnesotans with disabilities and for the greater community. 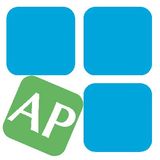