Houses of the Hamptons, Revised Edition, 2013 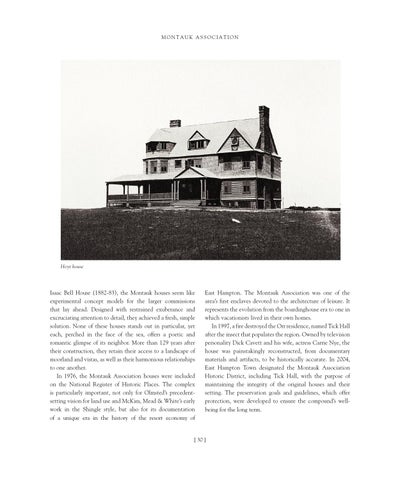 Isaac Bell House (1882-83), the Montauk houses seem like experimental concept models for the larger commissions that lay ahead. Designed with restrained exuberance and excruciating attention to detail, they achieved a fresh, simple solution. None of these houses stands out in particular, yet each, perched in the face of the sea, offers a poetic and romantic glimpse of its neighbor. More than 129 years after their construction, they retain their access to a landscape of moorland and vistas, as well as their harmonious relationships to one another. In 1976, the Montauk Association houses were included on the National Register of Historic Places. The complex is particularly important, not only for Olmsted’s precedentsetting vision for land use and McKim, Mead &amp; White’s early work in the Shingle style, but also for its documentation of a unique era in the history of the resort economy of

East Hampton. The Montauk Association was one of the area’s first enclaves devoted to the architecture of leisure. It represents the evolution from the boardinghouse era to one in which vacationists lived in their own homes. In 1997, a fire destroyed the Orr residence, named Tick Hall after the insect that populates the region. Owned by television personality Dick Cavett and his wife, actress Carrie Nye, the house was painstakingly reconstructed, from documentary materials and artifacts, to be historically accurate. In 2004, East Hampton Town designated the Montauk Association Historic District, including Tick Hall, with the purpose of maintaining the integrity of the original houses and their setting. The preservation goals and guidelines, which offer protection, were developed to ensure the compound’s wellbeing for the long term.

Houses of the Hamptons, Revised Edition, 2013

HOUSES OF THE HAMPTONS, 1880–1930 explores more than 30 houses, many designed by some of America’s leading architects–McKim, Mead & White, John Russell Pope, Harrie T. Lindeberg–and by less well-known but equally gifted designers such as Edward Purcel Mellon, Isaac H. Green, and John Custis Lawrence. The great summer places of the Hamptons present an ensemble of exceptional architectural variety and achievement. Illustrated with more than 350 photographs and floor plans, the book provides a rich and informative portrait of the American leisure class at play. Authors Gary Lawrance and Anne Surchin lead the reader on a tour of a bygone era when couples in white flannel played tennis or croquet on verdant lawns or when America’s aristocracy flocked to watch the students of William Merritt Chase’s Shinnecock Art School at their paintings. The revised edition features 4 additional chapters and new color photography. 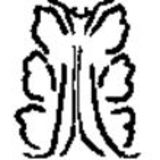