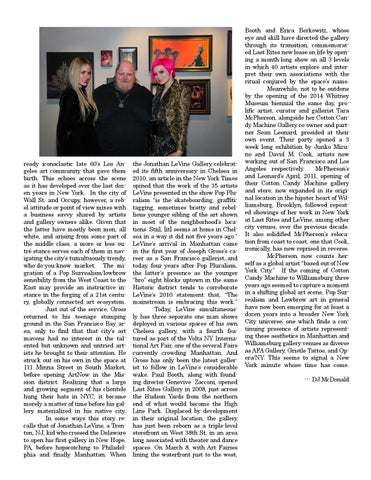 ready iconoclastic late 60’s Los Angeles art community that gave them birth. this echoes across the scene as it has developed over the last dozen years in New york. in the city of Wall St. and Occupy, however, a rebel attitude or point of view mixes with a business savvy shared by artists and gallery owners alike. Given that the latter have mostly been men, all white, and arising from some part of the middle class, a more or less outré stance serves each of them in navigating the city’s tumultuously trendy, who-do-you-know market. the migration of a Pop Surrealism/lowbrow sensibility from the West coast to the east may provide an instructive instance in the forging of a 21st century, globally connected art ecosystem. Just out of the service, Gross returned to his teenage stomping ground in the San Francisco Bay area, only to find that that city’s art mavens had no interest in the talented but unknown and untried artists he brought to their attention. he struck out on his own in the space at 111 minna Street in South market, before opening artNow in the mission district. realizing that a large and growing segment of his clientele hung their hats in Nyc, it became merely a matter of time before his gallery materialized in his native city. in some ways this story recalls that of Jonathan Levine, a trenton, NJ, kid who crossed the delaware to open his first gallery in New Hope, pa, before hopscotching to philadelphia and finally Manhattan. When

the Jonathan Levine Gallery celebrated its fifth anniversary in Chelsea in 2010, an article in the New york times opined that the work of the 35 artists Levine presented in the show pop pluralism “is the skateboarding, graffititagging, sometimes bratty and rebellious younger sibling of the art shown in most of the neighborhood’s locations. Stiil, [it] seems at home in chelsea in a way it did not five years ago.” LeVine’s arrival in Manhattan came in the first year of Joseph Gross’s career as a San Francisco gallerist,,and today, four years after pop pluralism, the latter’s presence as the younger “bro” eight blocks uptown in the same historic district tends to corroborate LeVine’s 2010 statement that, “The mainstream is embracing this work.” today, Levine simultaneously has three separate one man shows deployed in various spaces of his own chelsea gallery, with a fourth featured as part of the volta Ny international art Fair, one of the several Fairs currently crowding manhattan. and Gross has only been the latest gallerist to follow in LeVine’s considerable wake. paul Booth, along with founding director Genevive Zacconi, opened Last Rites Gallery in 2008, just across the hudson yards from the northern end of what would become the high Line park. displaced by development in their original location, the gallery has just been reborn as a triple-level storefront on West 38th St. in an area long associated with theater and dance spaces. On March 8, with Art Fairies lining the waterfront just to the west,

Booth and erica Berkowitz, whose eye and skill have directed the gallery through its transition, commemorated Last rites new lease on life by opening a month-long show on all 3 levels in which 40 artists explore and interpret their own associations with the ritual conjured by the space’s name. meanwhile, not to be outdone by the opening of the 2014 Whitney museum biennial the same day, prolific artist, curator and gallerist Tara mcpherson, alongside her cotton candy machine Gallery co-owner and partner Sean Leonard, presided at their own event. their party opened a 3 week long exhibition by Junko mizuno and david m. cook, artists now working out of San Francisco and Los Angeles respectively. McPherson’s and Leonard’s April, 2011, opening of their cotton candy machine gallery and store, now expanded in its original location in the hipster heart of Williamsburg, Brooklyn, followed repeated showings of her work in New york at Last rites and Levine, among other city venues, over the previous decade. It also solidified McPherson’s relocation from coast to coast, one that cook, ironically, has now reprised in reverse. mcpherson now counts herself as a global artist “based out of New york city.” if the coming of cotton candy machine to Williamsburg three years ago seemed to capture a moment in a shifting global art scene, pop Surrealism and Lowbrow art in general have now been emerging for at least a dozen years into a broader New york City universe; one which finds a continuing presence of artists representing these aesthetics in manhattan and Williamsburg gallery venues as diverse as aFa Gallery, Gristle tattoo, and Opera/NY. This seems to signal a New york minute whose time has come. --- dJ mcdonald