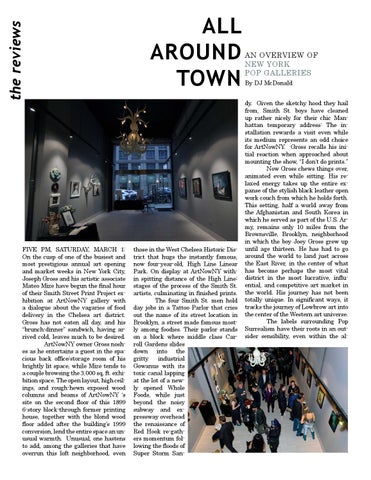 the reviews Five pm, Saturday, march 1: On the cusp of one of the busiest and most prestigious annual art opening and market weeks in New york city, Joseph Gross and his artistic associate Mateo Mize have begun the final hour of their Smith Street print project exhibition at artNowNy gallery with a dialogue about the vagaries of food delivery in the chelsea art district. Gross has not eaten all day, and his “brunch-dinner” sandwich, having arrived cold, leaves much to be desired. artNowNy owner Gross noshes as he entertains a guest in the spacious back office/storage room of his brightly lit space, while mize tends to a couple browsing the 3,000 sq, ft. exhibition space. the open layout, high ceilings, and rough-hewn exposed wood columns and beams of artNowNy ‘s site on the second floor of this 1899 6-story block-through former printing house, together with the blond wood floor added after the building’s 1999 conversion, lend the entire space an unusual warmth. unusual, one hastens to add, among the galleries that have overrun this loft neighborhood, even

those in the West chelsea historic district that hugs the instantly famous, now four-year-old, high Line Linear park. On display at artNowNy within spitting distance of the high Line: stages of the process of the Smith St. artists, culminating in finished prints. the four Smith St. men hold day jobs in a tattoo parlor that cries out the name of its street location in Brooklyn, a street made famous mostly among foodies. their parlor stands on a block where middle class carroll Gardens slides down into the gritty industrial Gowanus with its toxic canal lapping at the lot of a newly opened Whole Foods, while just beyond the noisy subway and expressway overhead the renaissance of red hook re-gathers momentum following the floods of Super Storm San-

aN OvervieW OF NeW yOrK pOp GaLLerieS By dJ mcdonald dy. Given the sketchy hood they hail from, Smith St. boys have cleaned up rather nicely for their chic manhattan temporary address: the installation rewards a visit even while its medium represents an odd choice for artNowNy. Gross recalls his initial reaction when approached about mounting the show, “I don’t do prints.” Now Gross chews things over, animated even while sitting. his relaxed energy takes up the entire expanse of the stylish black leather open work couch from which he holds forth. this setting, half a world away from the afghanistan and South Korea in which he served as part of the u.S. army, remains only 10 miles from the Brownsville, Brooklyn, neighborhood in which the boy Joey Gross grew up until age thirteen. he has had to go around the world to land just across the east river, in the center of what has become perhaps the most vital district in the most lucrative, influential, and competitive art market in the world. his journey has not been totally unique. In significant ways, it tracks the journey of Lowbrow art into the center of the Western art universe. the labels surrounding pop Surrealism have their roots in an outsider sensibility, even within the al-