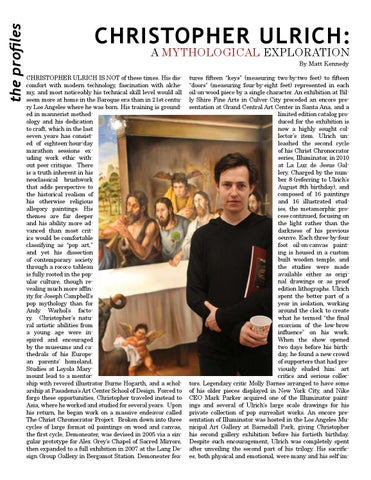 CHrIStOPHEr ULrICH IS NOt of these times. His discomfort with modern technology, fascination with alchemy, and most noticeably his technical skill level would all seem more at home in the Baroque era than in 21st century Los Angeles where he was born. His training is grounded in mannerist methodology and his dedication to craft, which in the last seven years has consisted of eighteen-hour-day marathon sessions exuding work ethic without peer critique. there is a truth inherent in his neoclassical brushwork that adds perspective to the historical realism of his otherwise religious allegory paintings. His themes are far deeper and his ability more advanced than most critics would be comfortable classifying as “pop art,” and yet his dissection of contemporary society through a rococo tableau is fully rooted in the popular culture, though revealing much more affinity for Joseph Campbell’s pop mythology than for Andy Warhol’s factory. Christopher’s natural artistic abilities from a young age were inspired and encouraged by the museums and cathedrals of his European parents’ homeland. Studies at Loyola Marymount lead to a mentorship with revered illustrator Burne Hogarth, and a scholarship at Pasadena’s Art Center School of Design. Forced to forgo these opportunities, Christopher traveled instead to Asia, where he worked and studied for several years. Upon his return, he began work on a massive endeavor called the Christ Chronocrator Project. Broken down into three cycles of large format oil paintings on wood and canvas, the first cycle, Demoneater, was devised in 2005 via a singular prototype for Alex Grey’s Chapel of Sacred Mirrors, then expanded to a full exhibition in 2007 at the Lang Design Group Gallery in Bergamot Station. Demoneater fea-

tures fifteen “keys” (measuring two-by-two feet) to fifteen “doors” (measuring four-by-eight feet) represented in each oil-on-wood piece by a single character. An exhibition at Billy Shire Fine Arts in Culver City preceded an encore presentation at Grand Central Art Center in Santa Ana, and a limited edition catalog produced for the exhibition is now a highly sought collector’s item. Ulrich unleashed the second cycle of his Christ Chronocrator series, Illuminator, in 2010 at La Luz de Jesus Gallery. Charged by the number 8 (referring to Ulrich’s August 8th birthday), and composed of 16 paintings and 16 illustrated studies, the metamorphic process continued, focusing on the light rather than the darkness of his previous oeuvre. Each three-by-four foot oil-on-canvas painting is housed in a custom built wooden temple, and the studies were made available either as original drawings or as proof edition lithographs. Ulrich spent the better part of a year in isolation, working around the clock to create what he termed “the final exorcism of the low-brow influence” on his work. When the show opened two days before his birthday, he found a new crowd of supporters that had previously eluded him: art critics and serious collectors. Legendary critic Molly Barnes arranged to have some of his older pieces displayed in New York City, and Nike CEO Mark Parker acquired one of the Illuminator paintings and several of Ulrich’s large scale drawings for his private collection of pop surrealist works. An encore presentation of Illuminator was hosted in the Los Angeles Municipal Art Gallery at Barnsdall Park, giving Christopher his second gallery exhibition before his fortieth birthday. Despite such encouragement, Ulrich was completely spent after unveiling the second part of his trilogy. His sacrifices, both physical and emotional, were many and his self-im-