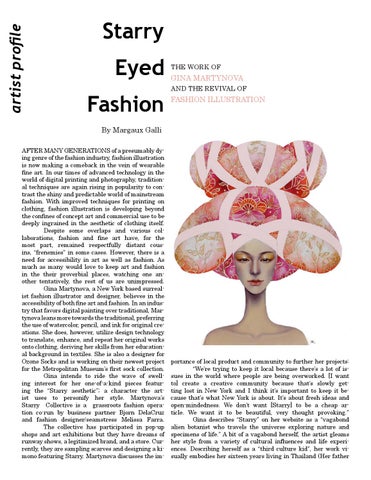 Gina MarTynova and The revival of

By Margaux Galli afTer Many GeneraTions of a presumably dying genre of the fashion industry, fashion illustration is now making a comeback in the vein of wearable fine art. In our times of advanced technology in the world of digital printing and photography, traditional techniques are again rising in popularity to contrast the shiny and predictable world of mainstream fashion. With improved techniques for printing on clothing, fashion illustration is developing beyond the confines of concept art and commercial use to be deeply ingrained in the aesthetic of clothing itself. despite some overlaps and various collaborations, fashion and fine art have, for the most part, remained respectfully distant cousins, “frenemies” in some cases. However, there is a need for accessibility in art as well as fashion. as much as many would love to keep art and fashion in the their proverbial places, watching one another tentatively, the rest of us are unimpressed. Gina Martynova, a new york based surrealist fashion illustrator and designer, believes in the accessibility of both fine art and fashion. In an industry that favors digital painting over traditional, Martynova leans more towards the traditional, preferring the use of watercolor, pencil, and ink for original creations. she does, however, utilize design technology to translate, enhance, and repeat her original works onto clothing, deriving her skills from her educational background in textiles. she is also a designer for ozone socks and is working on their newest project for the Metropolitan Museum’s first sock collection. Gina intends to ride the wave of swelling interest for her one-of-a-kind pieces featuring the “Starry aesthetic”; a character the artist uses to personify her style. Martynova’s starry Collective is a grassroots fashion operation co-run by business partner Bjorn delaCruz and fashion designer/seamstress Melissa farra. The collective has participated in pop-up shops and art exhibitions but they have dreams of runway shows, a legitimized brand, and a store. Currently, they are sampling scarves and designing a kimono featuring starry. Martynova discusses the im-

portance of local product and community to further her projects: “We’re trying to keep it local because there’s a lot of issues in the world where people are being overworked. [i want to] create a creative community because that’s slowly getting lost in new york and i think it’s important to keep it because that’s what new york is about. it’s about fresh ideas and open-mindedness. We don’t want [starry] to be a cheap article. We want it to be beautiful, very thought provoking.” Gina describes “Starry” on her website as a “vagabond alien botanist who travels the universe exploring nature and specimens of life.” A bit of a vagabond herself, the artist gleams her style from a variety of cultural influences and life experiences. Describing herself as a “third culture kid”, her work visually embodies her sixteen years living in Thailand (her father