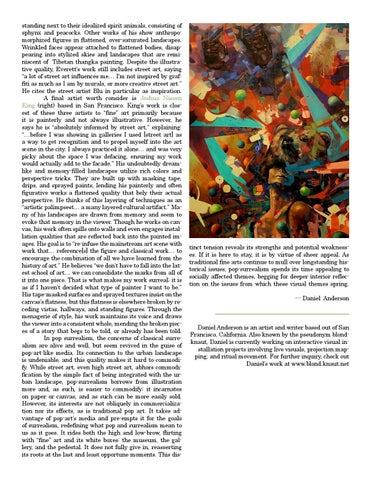 standing next to their idealized spirit animals, consisting of sphynx and peacocks. Other works of his show anthropomorphized figures in flattened, over-saturated landscapes. Wrinkled faces appear attached to flattened bodies, disappearing into stylized skies and landscapes that are reminiscent of Tibetan thangka painting. Despite the illustrative quality, Everett’s work still includes street art, saying “a lot of street art influences me… I’m not inspired by graffiti as much as I am by murals, or more creative street art.” He cites the street artist Blu in particular as inspiration. A final artist worth consider is Joshua Nissen King (right) based in San Francisco. King’s work is closest of these three artists to “fine” art primarily because it is painterly and not always illustrative. However, he says he is “absolutely informed by street art,” explaining: “…before I was showing in galleries I used [street art] as a way to get recognition and to propel myself into the art scene in the city. I always practiced it alone… and was very picky about the space I was defacing, ensuring my work would actually add to the facade.” His undoubtedly dreamlike and memory-filled landscapes utilize rich colors and perspective tricks. They are built up with masking tape, drips, and sprayed paints, lending his painterly and often figurative works a flattened quality that bely their actual perspective. He thinks of this layering of techniques as an “artistic palimpsest… a many layered cultural artifact.” Many of his landscapes are drawn from memory and seem to evoke that memory in the viewer. Though he works on canvas, his work often spills onto walls and even engages installation qualities that are reflected back into the painted images. His goal is to “re-infuse the mainstream art scene with work that… reference[s] the figure and classical work… to encourage the combination of all we have learned from the history of art.” He believes “we don’t have to fall into the latest school of art… we can consolidate the marks from all of it into one piece. That is what makes my work surreal; it is as if I haven’t decided what type of painter I want to be.” His tape-masked surfaces and sprayed textures insist on the canvas’s flatness, but this flatness is elsewhere broken by receding vistas, hallways, and standing figures. Through the menagerie of style, his work maintains its voice and draws the viewer into a consistent whole, mending the broken pieces of a story that begs to be told, or already has been told. In pop surrealism, the concerns of classical surrealism are alive and well, but seem revived in the guise of pop-art-like media. Its connection to the urban landscape is undeniable, and this quality makes it hard to commodify. While street art, even high street art, abhors commodification by the simple fact of being integrated with the urban landscape, pop-surrealism borrows from illustration more and, as such, is easier to commodify; it incarnates on paper or canvas, and as such can be more easily sold. However, its interests are not obliquely in commercialization nor its effects, as is traditional pop art. It takes advantage of pop-art’s media and pre-empts it for the goals of surrealism, redefining what pop and surrealism mean to us as it goes. It rides both the high and low-brow, flirting with “fine” art and its white boxes: the museum, the gallery, and the pedestal. It does not fully give in, reasserting its roots at the last and least opportune moments. This dis-

tinct tension reveals its strengths and potential weaknesses. If it is here to stay, it is by virtue of sheer appeal. As traditional fine arts continue to mull over longstanding historical issues, pop-surrealism spends its time appealing to socially affected themes, begging for deeper interior reflection on the issues from which these visual themes spring. --- Daniel Anderson

Daniel Anderson is an artist and writer based out of San Francisco, California. Also known by the pseudonym blondknaut, Daniel is currently working on interactive visual installation projects involving live visuals, projection mapping, and ritual movement. For further inquiry, check out Daniel’s work at www.blond.knaut.net