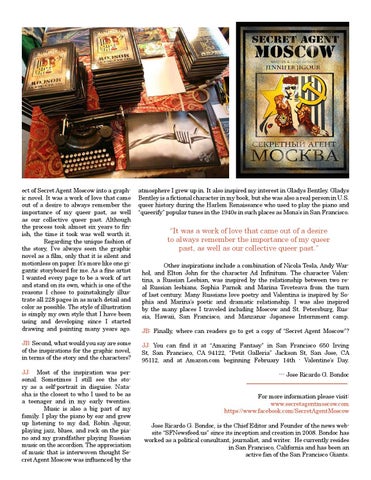 ect of Secret Agent Moscow into a graphic novel. It was a work of love that came out of a desire to always remember the importance of my queer past, as well as our collective queer past. Although the process took almost six years to finish, the time it took was well worth it. Regarding the unique fashion of the story, I’ve always seen the graphic novel as a film, only that it is silent and motionless on paper. It’s more like one gigantic storyboard for me. As a fine artist I wanted every page to be a work of art and stand on its own, which is one of the reasons I chose to painstakingly illustrate all 228 pages in as much detail and color as possible. The style of illustration is simply my own style that I have been using and developing since I started drawing and painting many years ago.

atmosphere I grew up in. It also inspired my interest in Gladys Bentley. Gladys Bentley is a fictional character in my book, but she was also a real person in U.S. queer history during the Harlem Renaissance who used to play the piano and “queerify” popular tunes in the 1940s in such places as Mona’s in San Francisco.

JB: Second, what would you say are some of the inspirations for the graphic novel, in terms of the story and the characters?

JJ: Most of the inspiration was personal. Sometimes I still see the story as a self-portrait in disguise. Natasha is the closest to who I used to be as a teenager and in my early twenties. Music is also a big part of my family. I play the piano by ear and grew up listening to my dad, Robin Jigour, playing jazz, blues, and rock on the piano and my grandfather playing Russian music on the accordion. The appreciation of music that is interwoven thought Secret Agent Moscow was influenced by the

“It was a work of love that came out of a desire to always remember the importance of my queer past, as well as our collective queer past.” Other inspirations include a combination of Nicola Tesla, Andy Warhol, and Elton John for the character Ad Infinitum. The character Valentina, a Russian Lesbian, was inspired by the relationship between two real Russian lesbians, Sophia Parnok and Marina Tsveteava from the turn of last century. Many Russians love poetry and Valentina is inspired by Sophia and Marina’s poetic and dramatic relationship. I was also inspired by the many places I traveled including Moscow and St. Petersburg, Russia, Hawaii, San Francisco, and Manzanar Japanese Internment camp. JB: Finally, where can readers go to get a copy of “Secret Agent Moscow”?

For more information please visit: www.secretagentmoscow.com https://www.facebook.com/SecretAgentMoscow Jose Ricardo G. Bondoc, is the Chief Editor and Founder of the news website “SFNewsfeed.us” since its inception and creation in 2008. Bondoc has worked as a political consultant, journalist, and writer. He currently resides in San Francisco, California and has been an active fan of the San Francisco Giants.