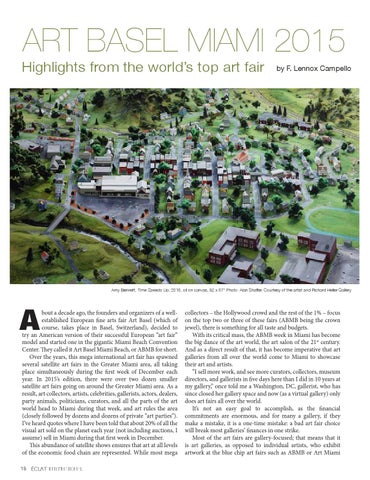 bout a decade ago, the founders and organizers of a wellestablished European fine arts fair Art Basel (which of course, takes place in Basel, Switzerland), decided to try an American version of their successful European “art fair” model and started one in the gigantic Miami Beach Convention Center. They called it Art Basel Miami Beach, or ABMB for short. Over the years, this mega international art fair has spawned several satellite art fairs in the Greater Miami area, all taking place simultaneously during the first week of December each year. In 2015’s edition, there were over two dozen smaller satellite art fairs going on around the Greater Miami area. As a result, art collectors, artists, celebrities, gallerists, actors, dealers, party animals, politicians, curators, and all the parts of the art world head to Miami during that week, and art rules the area (closely followed by dozens and dozens of private “art parties”). I’ve heard quotes where I have been told that about 20% of all the visual art sold on the planet each year (not including auctions, I assume) sell in Miami during that first week in December. This abundance of satellite shows ensures that art at all levels of the economic food chain are represented. While most mega

collectors – the Hollywood crowd and the rest of the 1% – focus on the top two or three of these fairs (ABMB being the crown jewel), there is something for all taste and budgets. With its critical mass, the ABMB week in Miami has become the big dance of the art world, the art salon of the 21st century. And as a direct result of that, it has become imperative that art galleries from all over the world come to Miami to showcase their art and artists. “I sell more work, and see more curators, collectors, museum directors, and gallerists in five days here than I did in 10 years at my gallery,” once told me a Washington, DC, gallerist, who has since closed her gallery space and now (as a virtual gallery) only does art fairs all over the world. It’s not an easy goal to accomplish, as the financial commitments are enormous, and for many a gallery, if they make a mistake, it is a one-time mistake: a bad art fair choice will break most galleries’ finances in one strike. Most of the art fairs are gallery-focused; that means that it is art galleries, as opposed to individual artists, who exhibit artwork at the blue chip art fairs such as ABMB or Art Miami