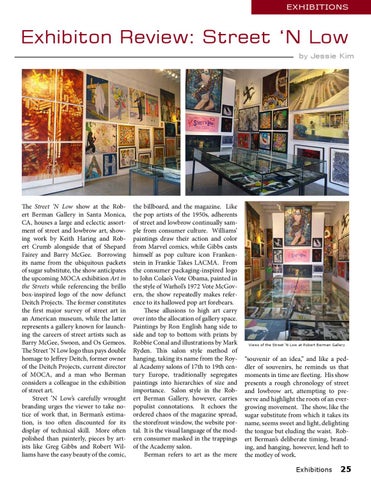 The Street ‘N Low show at the Robert Berman Gallery in Santa Monica, CA, houses a large and eclectic assortment of street and lowbrow art, showing work by Keith Haring and Robert Crumb alongside that of Shepard Fairey and Barry McGee. Borrowing its name from the ubiquitous packets of sugar substitute, the show anticipates the upcoming MOCA exhibition Art in the Streets while referencing the brillo box-inspired logo of the now defunct Deitch Projects. The former constitutes the first major survey of street art in an American museum, while the latter represents a gallery known for launching the careers of street artists such as Barry McGee, Swoon, and Os Gemeos. The Street ‘N Low logo thus pays double homage to Jeffrey Deitch, former owner of the Deitch Projects, current director of MOCA, and a man who Berman considers a colleague in the exhibition of street art. Street ’N Low’s carefully wrought branding urges the viewer to take notice of work that, in Berman’s estimation, is too often discounted for its display of technical skill. More often polished than painterly, pieces by artists like Greg Gibbs and Robert Williams have the easy beauty of the comic,

the billboard, and the magazine. Like the pop artists of the 1950s, adherents of street and lowbrow continually sample from consumer culture. Williams’ paintings draw their action and color from Marvel comics, while Gibbs casts himself as pop culture icon Frankenstein in Frankie Takes LACMA. From the consumer packaging-inspired logo to John Colao’s Vote Obama, painted in the style of Warhol’s 1972 Vote McGovern, the show repeatedly makes reference to its hallowed pop art forebears. These allusions to high art carry over into the allocation of gallery space. Paintings by Ron English hang side to side and top to bottom with prints by Robbie Conal and illustrations by Mark Ryden. This salon style method of hanging, taking its name from the Royal Academy salons of 17th to 19th century Europe, traditionally segregates paintings into hierarchies of size and importance. Salon style in the Robert Berman Gallery, however, carries populist connotations. It echoes the ordered chaos of the magazine spread, the storefront window, the website portal. It is the visual language of the modern consumer masked in the trappings of the Academy salon. Berman refers to art as the mere

Views of the Street ‘N Low at Robert Berman Gallery

“souvenir of an idea,” and like a peddler of souvenirs, he reminds us that moments in time are fleeting. His show presents a rough chronology of street and lowbrow art, attempting to preserve and highlight the roots of an evergrowing movement. The show, like the sugar substitute from which it takes its name, seems sweet and light, delighting the tongue but eluding the waist. Robert Berman’s deliberate timing, branding, and hanging, however, lend heft to the motley of work. Exhibitions

An issue of California Contemporary Art, published in April 2011.