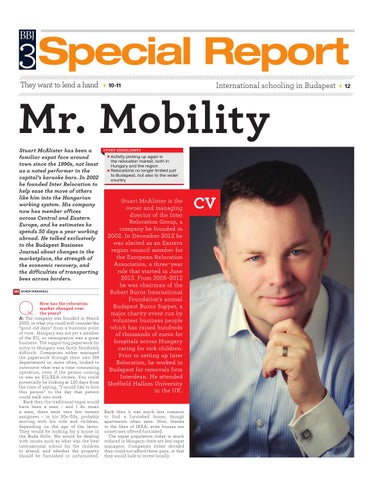 3Special Report They want to lend a hand

Mr. Mobility Stuart McAlister has been a familiar expat face around town since the 1990s, not least as a noted performer in the capital’s karaoke bars. In 2002 he founded Inter Relocation to help ease the move of others like him into the Hungarian working system. His company now has member offices across Central and Eastern Europe, and he estimates he spends 50 days a year working abroad. He talked exclusively to the Budapest Business Journal about changes in the marketplace, the strength of the economic recovery, and the difficulties of transporting bees across borders. ROBIN MARSHALL

How has the relocation market changed over the years? A: The company was founded in March 2002, in what you could still consider the “good old days” from a business point of view. Hungary was not yet a member of the EU, so immigration was a great business. The supporting paperwork for entry to Hungary was fairly fiendishly difficult. Companies either managed the paperwork through their own HR departments or, more often, looked to outsource what was a time consuming operation, even if the person coming in was an EU/EEA citizen. You could potentially be looking at 120 days from the time of saying, “I would like to hire this person” to the day that person could walk into work. Back then the traditional expat would have been a man – and I do mean a man, there were very few women assignees – in his 30s−50s, probably moving with his wife and children, depending on the age of the latter. They would be looking for a house in the Buda Hills. We would be dealing with issues such as what was the best international school for the children to attend, and whether the property should be furnished or unfurnished.

Activity picking up again in the relocation market, both in Hungary and the region ■ Relocations no longer limited just to Budapest, but also to the wider country

Stuart McAlister is the owner and managing director of the Inter Relocation Group, a company he founded in 2002. In December 2012 he was elected as an Eastern region council member for the European Relocation Association, a three−year role that started in June 2013. From 2005−2012 he was chairman of the Robert Burns International Foundation’s annual Budapest Burns Supper, a major charity event run by volunteer business people which has raised hundreds of thousands of euros for hospitals across Hungary caring for sick children. Prior to setting up Inter Relocation, he worked in Budapest for removals firm Interdean. He attended Sheffield Hallam University in the UK.

Back then it was much less common to find a furnished house, though apartments often were. Now, thanks to the likes of IKEA, even houses are sometimes offered furnished. The expat population today is much reduced in Hungary; there are less expat managers. Companies either decided they could not afford these guys, or that they would look to invest locally.