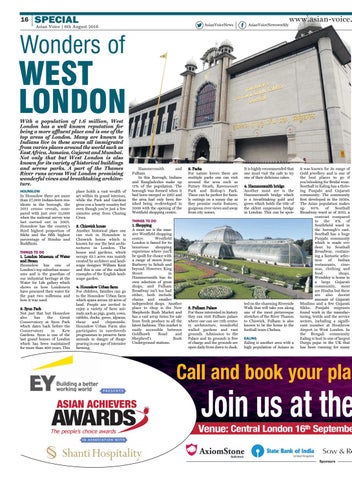 With a population of 1.6 million, West London has a well known reputation for being a more affluent place and is one of the top areas of London. Many are known to Indians live in these areas all immigrated from varies places around the world such as East Africa, Jamaica, Gujarat and Mumbai. Not only that but West London is also known for its variety of historical buildings and serene parks. A part of the Thames River runs across West London promising wonderful views and breathtaking architecture. HOUNSLOW In Hounslow there are more than 27,000 Indian-born residents in the borough, the 2011 census reveals, compared with just over 15,000 when the national survey was last carried out in 2001. Hounslow has the country&#39;s third highest proportion of Sikhs and the fifth highest percentage of Hindus and Buddhists.

THINGS TO DO 1. London Museum of Water and Steam Hounslow has one of London’s top suburban museums and is the guardian of our industrial heritage at the Water for Life gallery which shows us how Londoners have procured their water for the past two millennia and how it was used. 2. Syon Park Not just that but Hounslow also has the Great Conservatory at Syon Park which dates back before the Conservatory in Kew Gardens. Syon is one of the last grand houses of London which has been maintained for more than 400 years. This

place holds a vast wealth of art within its grand interiors, while the Park and Gardens gives you a hearty country feel even though you’re just a few minutes away from Charing Cross. 3. Chiswick house Another historical place one can visit in Hounslow is Chiswick house which is known for one the best architectures in London. The house and gardens, which occupy 65.1 acres was mainly created by architect and landscape designer William Kent and this is one of the earliest examples of the English landscape garden. 4. Hounslow Urban farm For children, families can go to the Hounslow Urban farm which spans across 29 acres of land. People are invited to enjoy a variety of farm animals such as pigs, goats, cows, rabbits, ducks, geese, alpacas, rheas and chipmunks. Hounslow Urban Farm also participates in rare-breeds programmes to preserve farm animals in danger of disappearing in our age of intensive farming.

THINGS TO DO 1. Pitzhanger Manor House However, places to visit in Ealing is the grand and beautiful Pitzhanger Manor House and the park has some wonderful ornamental bridges, ponds, streams and a walled rose garden. During July and August there will be a multitude of festivals take place showcasing jazz, comedy and other performances. Not only that but Ealing is also home to Bunny Park in Hanwell, and Acton Park which promises beautiful gardens.

Hammersmith and Fulham In this Borough, Indians and Bangladeshis make up 11% of the population. The borough was formed when it had been merged in 1965 and the area had only been finished being re-developed in 2008 with the opening of the Westfield shopping centre. THINGS TO DO 1. Shopping A must see is the massive Westfield shopping centre. Westfield London is famed for its luxurious shopping experience where you&#39;ll be spoilt for choice with a range of stores from Burberry to Schuh and beyond. However, King Street in Hammersmith has its own selection of great shops, and Fulham Broadway isn’t too bad either, both include chains and smaller independent shops. Another place to shop is the New Shepherds Bush Market and has a vast array items for sale from fresh produce to all the latest fashions. This market is easily accessible between Goldhawk Road and Shepherd&#39;s Bush Underground stations.

2. Parks For nature lovers there are multiple parks one can visit around the area such as Putney Heath, Ravenscourt Park and Bishop&#39;s Park. These can be perfect for family outings on a sunny day as they promise rustic features, gorgeous river views and away from city noises.

3. Fulham Palace For those interested in history they can visit Fulham palace where one can see 11th century architecture, wonderful walled gardens and vast grounds. Admission to the Palace and its grounds is free of charge and the grounds are open daily from dawn to dusk.

It is highly recommended that one must visit the cafe to try one of their delicious cakes. 4. Hammersmith bridge Another must see is the Hammersmith bridge which is a breathtaking gold and green which holds the title of the oldest suspension bridge in London. This can be spot-

ted on the charming Riverside Walk that will take you along one of the most picturesque stretches of the River Thames to Chiswick. Fulham is also known to be the home to the football team Chelsea. EALING Ealing is another area with a high population of Asians as

it was known for its range of Gold jewellery and is one of the best places to go if you’relooking for Bridal wear. Southall in Ealing has a thriving Punjabi and Gujarati community. The community first developed in the 1950s. The Asian population makes up 80% of Southall Broadway ward as of 2011, a contrast compared to the 8% of Southfield ward in the borough&#39;s east. Southall has a huge Punjabi community which is made evident by Southall Broadway, containing a fantastic selection of Indian restaurants, cinemas, clothing and food shops. Wembley is home to a large Gujarati community, most are Hindus but there are also decent amount of Gujarati Muslims and a few Gujarati Sikhs. Punjabi migrants found work in the manufacturing, textile and the service sectors, including a significant number at Heathrow Airport in West London. In the Bengali community Ealing is host to one of largest Durga pujas in the UK that has been running for many

2. Authentic cuisines Ealing has one of the largest Polish communities in London and there’s the Magnolia Cafe, offering irresistible home made authentic Polish food. Ealing has a vast range of international cuisines such as the famous Nepalese restaurant called Monty&#39;s in Ealing Broadway and the Atariya Sushi bar which comes highly recommended, but remember to book early if you want a guaranteed place! 3. Southall markets In Southall market is a hybrid of a traditional market place and the essence of Indian culture. One can find a vast array goods on sale such as fresh produce, spices and sari fabrics however, the poultry and horse markets have now closed, after 300 years of trade. The Broadway is famous for the huge amount of shops selling sarees of every colour, small trinkets such as bangles for any occasion, food made freshly in front of your eyes. For all your Indian shopping needs Southall is the place to be. 4. Gurdwaras Sri Guru Sigh Sabh The Gurdwara Sri Guru Singh Sabh is also situated in the borough and is the largest Gurdwara outside India which was established in 1950s. This was done to accommodate for the ever growing Sikh community in Southall. The Gurdwara site was inaugurated by HRH Prince of Wales Prince Charles. Since then many dignitaries such as Former

PrimeMinister Rt Hon Tony Blair, Archbishop of Canterbury and the leaders of all the Political Parties have visited the Gurdwara. RICHMOND Richmond was founded following Henry VII&#39;s building of Richmond Palace in the 16th century, from which the town derives its name.The Asian population make up about 6.3% of the population of Richmond. With a third of the borough being green and open space which is five times more than any other borough in LondonRichmond has much to offer in terms of leisure activities such as boating, equestrian and some field sports.

THINGS TO DO 1. Royal Botanical Kew Gardens Richmond is home to the famous Royal Botanical Kew Gardens, it&#39;s a pleasure to walk through the serene gardens to look at the variety of flora they have. The newest greenhouses they have are interesting and modern with a lovely restaurant. In the Kew Gardens if they are brave enough one must try the Treetop Walkway stands in the Arboretum, between the Temperate House and the lake. The 18-metre high, 200-metre walkway enables visitors to walk around the crowns of various trees. The walkway provides opportunities for inspecting birds, insects, lichen and fungi at close quarters, as well as seeing blossom emerging and seed pods bursting open in spring. 2. Richmond Park Another landmark one can visit is Richmond Park which

was created by Charles I in the 17th century. Richmond Park includes many buildings of architectural or historic interest. For a little bit of British history one can visit Ham house which is situated by the Thames river. Richmond is also famous for its aptly named Richmond Theatre, this beautiful little theatre has stunning ceilings, architecture and comfortable seats that runs plays throughout the year.

KENSINGTON &amp; CHELSEA This borough is home to the Nottingham Hill Carnival, Europe&#39;s largest. It contains many of the most expensive residential districts in London and even in the

world and 10% Asian the borough consists of Indians. In this borough one can find many famous spots such Harrods, the Chelsea flower show and the Nottingham Hill Carnival. THINGS TO DO 1. Victoria and Albert Museum At the V&amp;A in Room 41 you can find yourself cast off to a time gone by as the V&amp;A have collections from South and South-East Asia comprise nearly 60,000 objects covering the Indian subcontinent south of the Himalayas, including India and Bangladesh. The range of the collection is immense. as it includes specially made jades and rock crystal embedding in jewellery, Indian textiles, a vast array of Indian sculptures, paintings from the Punjab Hill courts. Other notable artefacts that are contained in the V&amp;A is the famous Golden throne of Ranjit Singh which was the founder of the Sikh Empire.

Not only that but the V&amp;A hold temporary exhibitions for free, open to the public and an example of this is the Fabric of India exhibition which fully explored the incomparably rich world of handmade textiles from India. Another exhibition currently running is the Musical Wonders of India a selection of beautifully decorated instruments, one in the shape of a peacock adorned with real feathers, evokes India&quot;s rich musical traditions.

lion items within five main collections: botany, palaeontology and zoology. Many of the collections have great historical as well as scientific value, such as specimens collected by Charles Darwin. The museum is particularly famous for its exhibition of dinosaur skeletons and ornate cathedral like archi-

tecture. The Natural History Museum Library contains extensive books, journals, manuscripts, and artwork collections linked to the work and research of the scientific departments. The museum is recognised as one of the most important centres of natural history and research of in many of the listed fields.

2. Natural History Museum The museum is home to many science specimens comprising some 80 mil-

Join us at the 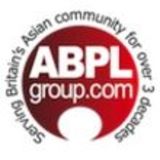