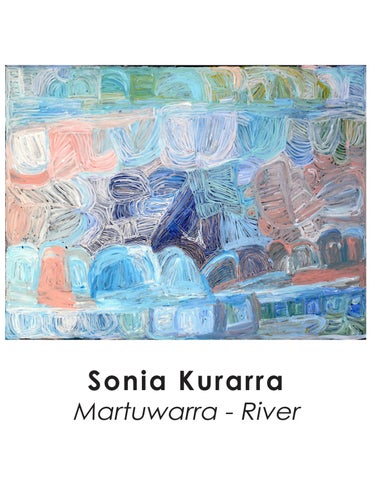 Sonia was born by a billabong at Noonkanbah community. Her parents were Walmajarri whose movements led them to live by the Fitzroy River. Sonia has lived most her life at Noonkanbah. A compulsive artist, Sonia for a long time was a teacher’s aid at the local school where she facilitated art making with the children. Illustrative of her attachment to the country where she grew up, an intimate life with the river, Sonia’s art is a saturation of river country motifs, be it parlka (barramundi), brim, tortoise, stingray, pandanus trees or the water itself. “Martuwarra is my river country; this painting is all about the Fitzroy River which flows down through Noonkanbah where I live. All kinds of fish live in the water, we catch big mob of fish here. I like Parlka (barramundi). We catch catfish and brim here too. Nganku (shark), Wirritunany (sawfish) and Stingray also live here. These fish live in these waters long after the flood has gone. Also this painting is about barramundi swimming on the surface of the water, you can also see the Wakiri (pandanus tree) and rocks all around. When the barramundi get tired they go back into the rock holes. These rock holes hold all the Parlka (barramundi) that live in the river. Kalpurtu (creator serpent-type being) also live in these rock holes and swim all around the Palma (creeks) and all around the Wakiri that grows in the river.”

SONIA KURARRA Biography Skin: Nampiyinti Language: Walmajarri Country: Noonkanbah DOB: c. 1952 Sonia Kurarra grew up in the river country at Yungngora (Noonkanbah). As a young woman she assisted with teaching art to children at the Yungngora Kindergarten. They used to take the children out to the Sandy Billabong and teach them how to paint and dance. There is an ngarrangkarni [Dreamtime] snake that lives in the billabong. His name is Nangurra. Sonia began painting at Mangkaja in the early 1990s working mostly on paper. Since 2008, Sonia has been working predominantly on canvas and her practice has become more recognised and included in major awards. Sonia’s work is now in most major collections within Australia and highly sought after by both national and international galleries and collectors. Sonia paints the sandy billabong country along the stretch of the Fitzroy River that runs directly behind the community. After the food waters recede, there are billabongs that hold a plentiful supply of parlka [barramundi], kurlumajarti [catish] and bream. She paints gapi [fish], parrmarr [rocks] where the Fish is cooked, ngurti [coolamon] and a karli [boomerang]. Sonia paints these images over and over as though they are etched into her psyche; works that are linear representations in monotones and others that are layers lathered on with wild and confident brush strokes and mark making. These contemporary compositions display an outstanding understanding of colour and composition. Sonia is one of the cornerstones of Mangkaja Arts and contemporary art making for the Fitzroy Valley region.