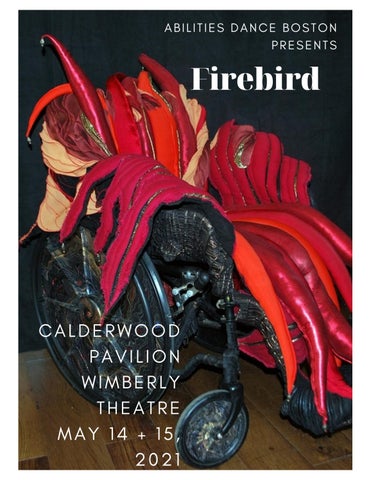 A NOTE FROM THE COMPANY DIRECTOR Dear distinguished guests, Welcome to our production! This has been a years’ long labor of love culminating into this evening. Over many virtual rehearsals, phone meetings, and more, we’ve been able to take drawings into dreams. This company has come far in just the four years since it began. We hope you’re as thrilled as we are to have you connected with us in real time to enjoy this moment. We’re honored to have guest artists Antoine Hunter and Zahna Simon from Urban Jazz Dance Company in California to join us as the lead prince and princess roles. We’re honored to have the opportunity to create work together virtually and in person as we blend deaf and disabled cultures into the work. Our artists have been working tirelessly across the country to create this story. Now, we have the opportunity to blend our collective cultural identities into an interwoven fabric that puts us at the center of our own stories. (Also donate so we can continue to tell stories at this level: abilitiesdanceboston.org/donate). Best, Ellice Patterson Founder/Executive &amp; Artistic Director of Abilities Dance Boston

ELLICE PATTERSON Founder/Executive and Artistic Director and Choreographer, Firebird Ellice Patterson is the executive director of BalletRox. Patterson founded and serves as executive/artistic director of Abilities Dance, a Boston-based dance company that welcomes artists with and without disabilities. Her choreography has appeared nationally, including at the Museum of Fine Arts in Boston; Links Hall in Chicago; Gibney Dance and The Series: Vol IV at the Ailey Citigroup Theatre in New York City; and more. She also lectures and teaches workshops at schools, universities, and organizations across the country. Patterson earned her Bachelor of Arts in biological sciences from Wellesley College, and a Masters of Science in management studies from Boston University Questrom School of Business.

ANDREW CHOE Composer Andrew Choe is the Music Director and Composer for Abilities Dance. He has composed original music for Abilities Dance since the company’s founding. His works have been showcased in WBUR, the MFA, the Peabody Essex Museum, The Modern Atlanta Dance (MAD) Festival, the Boston Contemporary Dance Festival, the GRUNT Festival at Links Hall in Chicago, and more. Andrew is thrilled and honored to be a part of a dance platform that is all inclusive and strives to make dance and the arts accessible for everyone. In his spare time, Andrew likes to play piano and has recently experimented with baking more.

ZAHNA SIMON Lead Princess A San Francisco native and Deaf from birth, Ms Zahna Simon (Z/she/her) is honored Changemaker of the year 2018 for San Francisco Live Oak School where she is a former alumni. She is a professional dancer, chemist, avid health nutritionist, researcher, Deaf advocate and Deaf interpreter. Ms Simon attended UCI double majoring in Chemistry and Dance working with distinguished faculty such as Lisa Naugle, David Allan and Donald McKayle. She is the Assistant Director for both Urban Jazz Dance Company and the Bay Area International Deaf Dance Festival under Antoine Hunter, Founder and Director and a full time office manager at a Professional Fiduciary Office.

LOUISA MANN Evil Queen Louisa began her training in Brattleboro, Vermont at the Brattleboro School of Dance. She has a BFA in dance from the University of Missouri-Kansas City and is currently working on her masters in Dance/Movement Therapy at the Pratt Institute. She has been working with Heidi Latsky Dance since 2015 and Abilities Dance since 2018.

JAMIE DESSER Corps Company Jamie Desser is from Closter, New Jersey and currently resides in New York City. She holds a BFA in dance from George Mason University. Jamie has worked with various companies including Marked Dance Project and the Dance for PD program at Mark Morris Dance Center. She currently teaches dance at the JCC on the Palisades and is the Chief Company Administrator for Heidi Latsky Dance. Jamie began working with Abilities Dance Boston in 2019 and is looking forward to performing for you this evening!

DREW GENOVA Corps Company Drew is an interdisciplinary multi-media artist; their artwork is an intersection of gender, social justice, and dance. Drew has been a performing artist for 10+ years, and his work ranges from developing works in the cabaret industry to studying with the Ailey school. Drew uses their dance work to invoke change through media and art. Drew is currently completing a masters in Media Design, to better develop civic engagement through dance, and to change the narrative of performing arts&#39; impact on society. Learn more via instagram; @thesunofvenus

LAUREN SAVA Corps Company Lauren Sava (she/her) has been a dancer with Abilities Dance Boston since 2017, choreographing for two of ABD&#39;s full-length productions. Her background is in modern dance. She has performed and choreographed with the Ballet Performance Group in Rochester, NY, Nu Movement Cooperative in Rochester, NY, and Dance Theater Group in Boston, MA. While at Nu Movement Cooperative, she taught an eight-week modern class, “Health Awareness through Dance” and performed in Biodance&#39;s Social Justice Series. With ABD, she has performed at local venues such as the former Green Street Studios and Urbanity&#39;s Contemporary Dance Festival, as well as national venues such as the Alvin Ailey Theater.

A. LAURA BRODY Costume Design A. Laura Brody sculpts for the human body and its vehicles. She developed and curates Opulent Mobility, a series of exhibits that re-imagine disability as opulent and powerful. Her art has been shown at ACE/121 Gallery, Brea Gallery, the Charles River Museum of Industry, Westbeth Center For the Arts, California State University Northridge, Gallery Expo, the Dora Stern Gallery at Arts Unbound, and The World of Wearable Art. Ms. Brody works as a professional costume maker and designer, an artist, and as a teacher. She is passionate about reuse, sustainability, and reimagining disability.

AMBER PEARCY Audio Descriptions Editor Amber is an arts access consultant based in Boston. She has been working with Abilities Dance since 2019 helping to bring their audio descriptions to life. Firebird is the company’s most ambitious project to date, and she hopes that the audience will enjoy experiencing it as much as she has enjoyed working on it.

Sho Grant and Sharon Mendes are the ASL interpreters for tonight&#39;s show

LETTER FROM MUSIC DIRECTOR AND COMPOSER OF ABILITIES DANCE Abilities Dance is proud to present Firebird, a completely reimagined and adapted production of the classic 1910 ballet. Because elements of its story and all of the choreography have been recreated from scratch, all aspects of the music in this production have also been completely transformed from scratch. These aspects include instrumentation, themes, motifs, and the development and arrangement. The arrangement and production of the music has been molded to fit the vision of our Director (Ellice Patterson) and the needs of our dancers. All music in this production will be accompanied by audio descriptions.

The newly composed music in our production reflects the dynamic setting of our characters and reimagined story, which moves from mystical curiosity, to passionate excitement, and onto moments of intense struggle and introspection. As the story and atmosphere evolve, the themes and motifs of our characters act as a constant to tie the overall arc of the story together.

As a composer who has adored the original score of the iconic ballet, it truly has been a transformative experience to compose the original music for this production. Thank you for supporting Abilities Dance, and I can’t wait for you to experience our adapted reimagining of Firebird. Sincerely, Andrew Choe Music Director and Composer of Abilities Dance Boston