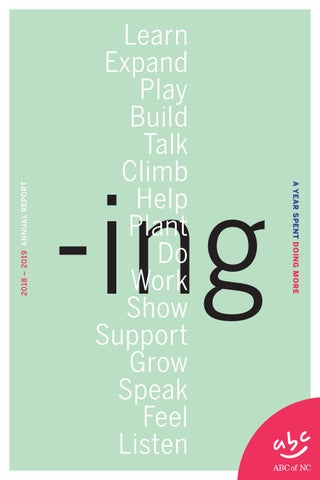 Dear Friends, We’ve worked tirelessly the past 12 months, and it shows. We moved into the SECU Autism Clinic at ABC of NC, and since then, we’ve been busy... doing more than ever for our community. We’ve been serving more children with autism and their families through evidence-based diagnostic, therapeutic, and educational programs. We’ve been building organizational capacity to meet the evergrowing need for high-quality autism services. We’ve been working our way through extensive waitlists for diagnostic evaluations and applied behavior analysis (ABA) therapy. We’ve been educating autism professionals by offering inhouse training, a collegiate internship program, and an Autism Paraprofessional class made possible through our continued collaboration with Forsyth Technical Community College. We’ve been doing what we’ve always done — creating hope and a brighter future for children with autism and their families. And we’ve been doing it all because of your generous support. Thank you for giving graciously and making all this doing possible. Thank you for investing in the mission and vision of ABC of NC; believing in the power of our work to change the lives of children with autism and their families; and strengthening our community through greater awareness, understanding, and acceptance. Gotta run — there’s lots to do!

A client acclimates to the sensations of a typical salon visit in the Great ClipsÂŽ at ABC of NC.

rinse or wash. Or perhaps it’s accepting the sight and feel of

the clippers. Ultimately, the goal is the same: learning to tolerate the barrage of sensory stimuli that have made haircuts so challenging in the past.

experience stress due to the

at ABC of NC that offered strategies

Many parents of children with

children’s hair while they sleep;

restraining them during haircuts;

Haircuts aren’t the only activities that may be difficult for children with autism. It could be the squeezing of the blood pressure cuff at the doctor’s office or the scraping sound during a dental cleaning. We’re working each day in all of these venues, helping children build their skills — first in a clinical

or giving up, helplessly watching

setting and eventually in the

as their hair becomes tangled

It doesn’t have to be this way.

So bring on the washing, trimming, and blow-drying. Because of you, our kids

Each day, children of all ages

walk through the door of ABC of NC’s own Great Clips® salon in the clinic’s Joy W. Pope Life Skills Center. For one child, the objective may be just sitting in

the salon chair. For another, it may be leaning back for a hair

More than 50% of parents of

with autism prepare for a hair

wash at a salon.

that getting a haircut was an extremely stressful experience for their child.

A client practices job skills in the Dewey’s® coffee shop at ABC of NC.

Thanks to your generous

support and that of community partners like Dewey’s Bakery,® we are serving optimism and a brighter future every day. Through their work in in our clinic lobby café, clients have a chance to practice critical job

“Welcome to Dewey’s® at ABC of

to running credit cards to brewing that perfect cup.

Are you responsible for hiring for your

“You would like one cup of coffee? Is that right?” “Yes, thank you.” If you come to ABC of NC in the morning, you might overhear this exchange between one of our teenage clients and a visitor to campus.

throughout our SECU Autism

our community recognize the many strengths of individuals with autism and their contributions to the workforce. Consider establishing an autism and neurodiversity hiring initiative in your workplace.

stocking shelves, bagging groceries, or shopping for themselves in the Food Lion.® They also might make a bed, fold towels, or restock toiletries in our Marriott® Daly Hotel Management suite. Each day, we are preparing teens with autism for life beyond ABC of NC — a life that can include meaningful work, greater independence, and increased feelings of self-worth. Order’s up!

According to Autism Speaks, the vast majority of adults

Scan the QR code to see a

with autism are either unemployed or underemployed, with

estimates ranging as high as 90%.

the steps of brewing a cup of coffee.

in people with autism, assumed to simply be â&amp;#x20AC;&amp;#x153;part of an autism diagnosis.â&amp;#x20AC;? For those on the spectrum, it is critical they access trained counselors and therapists who understand autism and its co-

Is he fidgeting and struggling to

sit still because he has autism or

because he has attention deficit

Is the discomfort she feels in

strategies and benefit from

This year, 150 children in our community with autism and cooccurring mental health conditions received critical counseling services at ABC of NC.

Do you love someone with autism who may also struggle with co-occurring mental health conditions? Contact the

The intersections between autism and co-occurring mental health conditions are

SECU Autism Clinic at ABC of NC at (336) 251-1180 for an appointment with one of our highly trained clinicians.

numerous. Whether it be ADHD, anxiety, depression, or OCD, mental health conditions affect individuals on the spectrum at a significantly higher rate than the general population. These symptoms often go unrecognized

Studies indicate that up to 84 percent of people with autism have some form of anxiety.

A counselor at ABC of NC offers support and hope to a client, all in a safe and welcoming environment.

A client enjoys the reward of outdoor playtime during his therapy session at ABC of NC.

Playing To Their Strengths

ABA is the leading, most

method employed at ABC of

with autism and is endorsed by the American Academy of Pediatrics,

National Institute of Mental Health, and the Surgeon General of the

and adaptive behaviors. Many

United States. Thanks to a generous three-year grant from the Kate B.

prescriptions for this intensive

therapy for 30 or more hours

per week. The gains can be

in the SECU Autism Clinic had Medicaid.

astounding – helping clients learn how to turn challenging behaviors into constructive ones. Banging on the door becomes a request to go outside and swing.

Melting down at a loud birthday

party is replaced by asking for

Make my bed when I get up each morning

headphones to lessen the noise. Pushing someone out of the way

transforms into a polite request

is an action plan that

My parents will: Give me a fish sticker

Each child makes progress on

his individual goals in his own

what is expected of

the person and the

medically necessary therapeutic interventions, children with autism are learning new skills, playing to their strengths, and climbing to new heights.

It can be distressing for parents — making it impossible to eat dinner as a family, visit a restaurant, or participate in birthday parties or holidays. ABC of NC’s innovative diet expansion program helps

Turning cheese puffs into grilled cheese is one of the things we do best. Over the years, ABC of NC’s Board Certified Behavior Analysts (BCBAs) have presented

Imagine your child eats a diet

their diets by using favorite foods

and apple juice. But he won’t eat

as a launching pad. So, potato

just any potato chips — only the

ones in the yellow bag. And the

juice has to be the one with the

tree on the bottle, served in the

blue cup with the red lid. Your gifts are nourishing bodies This goes on three meals a day —

at home, at school, at grandma’s house.

on diet expansion at conferences

Food selectivity — which can

include refusal to eat, lack of

intake — is a common issue for

children with autism, and it can

lead to nutritional deficiencies. ABC of NC offers a variety of free

Many children diagnosed with

to the Ohio Center

autism have difficulties with

for Autism and Low

rigidity and a need for sameness,

and this holds true for their food

classes designed to empower caregivers with strategies for success — whether it be diet expansion,

According to the National Institutes of Health, as many 89%

as 89% of children with autism have feeding problems, which may include unusual eating patterns, rituals, and food selectivity.

Giving Thanks To Our Supporters

Every attempt has been made to confirm the accuracy of this list. Please contact ABC of NC’s development office to report any errors, and please accept our sincere apologies.

Giving Thanks To Our Supporters

ABC Of NC Board of Directors

Giving thanks to ABC of NCâ&amp;#x20AC;&amp;#x2122;s boards of directors and staff for their commitment to helping individuals with autism spectrum disorder reach their full potential in a world where they are valued, accepted, and included.

Elephant In The Room

THANK YOU FOR YOUR SUPPORT More from ABC of NC