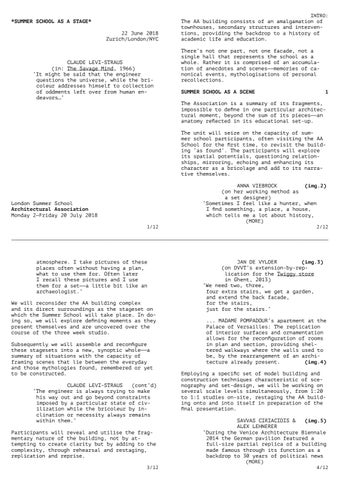 CLAUDE LEVI-STRAUS (in: The Savage Mind, 1966) ‘It might be said that the engineer questions the universe, while the bricoleur addresses himself to collection of oddments left over from human endeavors…’

INTRO: The AA building consists of an amalgamation of townhouses, secondary structures and interventions, providing the backdrop to a history of academic life and education.

There’s not one part, not one facade, not a single hall that represents the school as a whole. Rather it is comprised of an accumulation of anecdotes and scenes——memories of canonical events, mythologisations of personal recollections. SUMMER SCHOOL AS A SCENE

The Association is a summary of its fragments, impossible to define in one particular architectural moment, beyond the sum of its pieces——an anatomy reflected in its educational set-up. The unit will seize on the capacity of summer school participants, often visiting the AA School for the first time, to revisit the building ‘as found’. The participants will explore its spatial potentials, questioning relationships, mirroring, echoing and enhancing its character as a bricolage and add to its narrative themselves.

ANNA VIEBROCK (img.2) (on her working method as a set designer) ‘Sometimes I feel like a hunter, when I find something, a place, a house, which tells me a lot about history, (MORE) 2/12

JAN DE VYLDER (img.3) (on DVVT’s extension-by-replication for the Twiggy store in Ghent, 2013) ‘We need two, three, four extra stairs, we get a garden, and extend the back facade, for the stairs, just for the stairs.’

atmosphere. I take pictures of these places often without having a plan, what to use them for. Often later I recall these pictures and I use them for a set——a little bit like an archaeologist.’ We will reconsider the AA building complex and its direct surroundings as the stageset on which the Summer School will take place. In doing so, we will explore defining moments as they present themselves and are uncovered over the course of the three week studio. Subsequently we will assemble and reconfigure these stagesets into a new, synoptic whole——a summary of situations with the capacity of framing scenes that lie between the everyday and those mythologies found, remembered or yet to be constructed.

CLAUDE LEVI-STRAUS (cont’d) ‘The engineer is always trying to make his way out and go beyond constraints imposed by a particular state of civilization while the bricoleur by inclination or necessity always remains within them.’

Participants will reveal and utilise the fragmentary nature of the building, not by attempting to create clarity but by adding to the complexity, through rehearsal and restaging, replication and reprise. 3/12

... MADAME POMPADOUR’s apartment at the Palace of Versailles: The replication of interior surfaces and ornamentation allows for the reconfiguration of rooms in plan and section, providing sheltered walkways where the walls used to be, by the rearrangement of an architecture already present. (img.4) Employing a specific set of model building and construction techniques characteristic of scenography and set-design, we will be working on several scale levels simultaneously, from 1:20 to 1:1 studies on-site, restaging the AA building onto and into itself in preparation of the final presentation.

SAVVAS CIRIACIDIS &amp; (img.5) ALEX LEHNERER ‘During the Venice Architecture Biennale 2014 the German pavilion featured a full-size partial replica of a building made famous through its function as a backdrop to 30 years of political news (MORE) 4/12

broadcasts. The image of the “Kanzlerbungalow” [Chancellor’s Bungalow] in Bonn was recreated based on its mythologized status attained by its media portrayal.’ * BEDFORD SQUARE AS A STAGE

After studying the building’s scenographic qualities and narratives by means of very precise 1:20 theatre models, we will use on-site, 1:1 mock-ups of building fragments to create newly articulated situations: by reworking existing spaces through scenographical techniques (in cardboard where possible, plywood and prints), we will construct photorealistic interventions that only need to survive for the duration of the summerschool, but will be extensively documented at every stage as part of the programme.

THOMAS DEMAND, ANNA (img.6) VIEBROCK &amp; ALEXANDER KLUGE (on The Boat is Leaking, the Captain Lied. Fondazione Prada 2017) ‘...three commonly accepted ideas are questioned: the traditional separation between spectators and theatre set designs, the reduction of filmic products to mere exhibited objects and the visual isolation where artworks are usually presented within a show.’

Throughout the Summer School we plan an additional programme of film screenings and site visits to scenography workshops, film/tv-studios and architectural sites in and around London that are relevant to our studio, such as Inigo Jones’ Banqueting House which was devised and designed for the specific purpose of masques and theatrical performances, and the Royal National Theatre. ACT 1 In the first week, we will re-enact prolific scenes and anecdotes that make up the (in)formal history of the AA, and consider the role of the building within these histories and memories. We will build 1:20 scenography models of the building’s representative spaces and use these as a test site for spacial interventions. Simultaneously, we will replicate specific parts of the building in a photorealistic manner, rehearsing techniques that we will later need in our 1:1 set pieces.

ture and was fabricated from standard outdoor advertising and construction materials.’ ACT 2 The design work will concentrate on designing set pieces and interventions in relation to the existing spaces. In the process, the school’s presentation spaces and courtyard will become a test site for a 1:1 mock-up of a scenography that will reconfigure the space of the crits itselfs.

KORBINIAN has been a visiting critic at numerous institutions including the Architectural Association, the Bartlett School of Architecture and the University of Cambridge.

BENJAMIN GROOTHUIJSE ...is an architect, editor and educator based in Zurich. He studied at ETH Zurich and TU Delft, where he graduated at TONY FRETTON’s chair of Interiors, Buildings and Cities. Having worked for Atelier PETER ZUMTHOR and VON BALLMOOS KRUCKER Architekten, he recently co-founded the architectural practice GROOTHUIJSE DE BOER in Amsterdam. He currently teaches at the chair of Prof. ADAM CARUSO at ETH Zurich and he is regularly a visiting critic at the Rotterdamse Academie van Bouwkunst, TU Delft, ETH Zurich and the University of Cambridge.

FINAL CRITS The final presentation will encompass a change of scenography as performance, 1:1, real-time. * UNIT STAFF

KORBINIAN KAINZ ...is an architect and researcher based in London. Educated in Germany, Switzerland and Sweden, he graduated from ETH Zurich. Before joining 6a architects he worked at MEILI PETER Architekten and taught at ETH Zurich, where his research focussed on the shift in national representation in the early 20th century. Together with Prof. Dr.-Ing. UTA HASSLER, KORBINIAN has worked on the project for the 2014 German pavilion for the Venice Biennale. (MORE) 7/12

(img.7) KRISTIN POSEHN (on Reclamation, 2008) ‘This archway was reconstructed at 1:1 scale as a public outdoor architectural installation in Almere, the Netherlands. A three-dimensional replica of the decaying Lincoln School was clad with high-resolution photographs of the original. The work was a combination of architecture, photography and sculp(MORE) 6/12