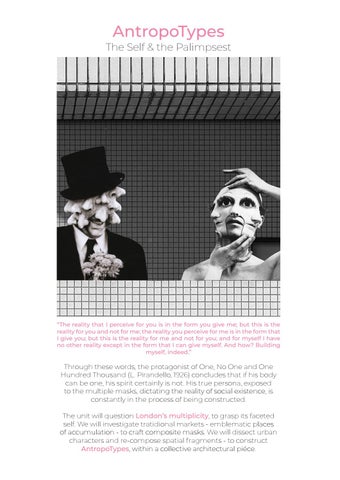 The Self &amp; the Palimpsest

Through these words, the protagonist of One, No One and One Hundred Thousand (L. Pirandello, 1926) concludes that if his body can be one, his spirit certainly is not. His true persona, exposed to the multiple masks, dictating the reality of social existence, is constantly in the process of being constructed. The unit will question London’s multiplicity, to grasp its faceted self. We will investigate tratidional markets - emblematic places of accumulation - to craft composite masks. We will dissect urban characters and re-compose spatial fragments - to construct AntropoTypes, within a collective architectural piéce.

The Self: Unmasking London’s Markets During these three weeks, we will sample and represent London’s multiple architectural self. We will investigate the city’s main markets - traditional, touristic or ethnic - as they have always been privileged spaces of accumulation to grasp the London’s relentlessy evolving culture. Etherogeneous landfill of fragmented props, they feed the soul of hungry observers and compulsive collectors. Markets exceed their architectural stageset, clashing the primitive flavour of ancestral routines with constantly updated sets of mirabilia. Much more than a series of stalls, sellers and buyers, they offer an effective portrait of contemporary urban rituals - framing a crucial part of the image that London offers to its inhabitants and visitors.

We will operate gathering objects, recording moments and drawing urban fragments to translate London’s markets into a series of urban characters. The unit will use this compound of goods, actors, procedures and spatial details in order to define spatial personalities: conceptual simulacra, enabling architecture to be represented as a cluster of personified instances. To delineate this process, we will draw analogies with famous British collectors. Particular cases, where the house and the accumulated objects are shaping the owner ‘s identity - as essential layers to define personality and perspective on society, space and culture.

AntropoTypes We will finally craft Londonâ&amp;#x20AC;&amp;#x2122;s personified instances into a series of composite masks, each of them becoming a physical archetype with antropomorphic features. We will be affected by Pareidolia, always looking for hidden human traces when examining architectural examples. We will hybridize the extrtacted geometrical rules with the symbolism of folkloric masks to find the appropriate proportions between the elements. Eventually, through a process of appropriation, accurate composition and intuitive assembling, students will define and implement effective techniques to craft archetypical lineaments into facial expressions.

The final outcome of the project will be a peculiar snapshot of London, where its multiple Self - the Antropotypes - stand and act in front of a continuous architectural stage set. Each AntropoTypical mask will be paired with his owner/creator, becoming thus an alive puppet to embody its assigned market within the reconstructed urban realm of London. We will create a theatrical background, a crafted animated panorama where to act as spatial characters - performing the impossible attempt to re-compose and present Londonâ&amp;#x20AC;&amp;#x2122;s multiplicity into one single piece of layered work.

The Palimpsest: Constructing the Architectural Piéce The whole course will be a journey through different modes of production, where the fabrication process will be as relevant as the final outcome. We will focus on model making, from 3D printing, lasercutting and cnc machine to casting and moulding. 1st Phase: The students will be divided in four groups, each of them creating a mask based on the analysis of a specific market. 2nd Phase: The students will collectively fabricate a layered background, where to stand while inhabiting the masks previously created.

Thursday 5 Work Session: Fabricate the structure (skeleton) of the masks.

Saturday 7 Work Session: Fabricate the structure (skeleton) of the masks.

Catalogue of props + Assembling the masks

Transform the Catalogue of Props to shape the Mask’s Skeleton

Sabrina Morreale Sabrina is an Architect and Illustrator based between Bangkok and London. She is collaborating with various magazines as Rivista Studio, Cartha Magazine and Elle as illustrator and with the RIBA as curator assistant. Her projects have always been related to the idea of fragmentation, using different media, enhancing the process of how things are made and assembled together. She constantly work with model making experimenting through casting, weaving and different fabrication techniques.

Lorenzo Perri Lorenzo graduated with Honours from the Architectural Association in 2016. He has taught as a consultant for Intermediate 7 and Diploma 8 at the Architectural Association, while participating to several competition with international firms (Amid. Cero9, Elemental). He is the cofounder of the research-based Plakat Platform and architectural practice Ecòl. Obsessed with geometry and aesthetics, precision and expression, before architecture he studied engineering and classical piano.

Lemonot is a design and research platform co-founded by Sabrina Morreale and Lorenzo Perri, who graduated together from the Architectural Association in London. Their work investigates architectural production and its implications on other disciplines. They use Architecture as a methodology to reach different outcomes: from toys to pastry tools, from tattoos to story-telling. Programme Heads of the AA Visiting School El Alto, their academic activity focuses on contemporary folklore and cultural assemblages. They taught at the AA Summer School since 2016, investigating gifs and kitbashing techniques. They are now Adjunct Professors at INDA International Program in Design and Architecture in Bangkok, Thailand. www.lemonot.co.uk

AA Summer School Sabrina Morreale and Lorenzo Perri 2-20 July 2018 Antropotypes. The Self and the Palimpsest