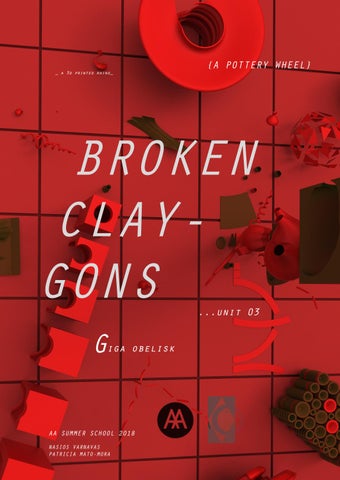 CONCEPT If clay is the amorphous substance extracted from the ground, imagined and transformed by thought, narrative and human hands; what is the analogy one can draw in today’s digital terra firma which is excessively mined for 0’s and 1’s. If the earth has been the ground for building and storing civilisations’ stories and fragments, then can digital databanks be thought to be the equivalent of an

fragments and polygons. What would a digital Persepolis look like if it was to be ‘unearthed’ 200 years from today? With the emergence of software, the boundaries between analogue and virtual are evermore blurred. As terminology used for physical operations is adapted and incorporated into the digital world, one can remember the Isomorphic Algorithms from Tron’s Legacy as these wonderful hybrid or ghost humans, partly made of flesh and bones, partly made of 0’s and 1’s, are born. An operating system / data bank is no longer a place to store and manage protocols but a ground on which novel narratives can emerge, shaped and synthesised. METHOD We will operate between Clay and Polygon, our cultural currency will be the Claygon.

We will spin the wheel, smash the clay, massage it, our hands will

be dirty, we will soften, sculpt re-sculpt poetics and formal possibilities. We will scan, analyse and revolve curve profiles, flow along surface, Boolean Union and Split, orbit and pan, zoom in and out, explore the virtual. We will Kitbash clay and polygon, blurring the process of production.

We will let it

dry, water it down and we will build it up again, we erase nothing. We will bake it in Grasshopper, we will bake it in the kiln. OUTPUT Claygon vessels and drawings: formal analysis for each, producing a forensic drawing of curves and radii revealing the process of making of each artifact – a thick mega drawing (1) A1. Our exhibition space will involve a grey space 2x2 m, with a pottery wheel, the process fragments laid on the ground, a computer, a 3d printed rhino and the Giga-Obelisk in the middle. We resurrect the Giga-Obelisk made of the claygon vessels, using our hands and Rhino. It will be an accumulation of each student’s vessel/ data assembled together. Our Obelisk/ Totem will be the celebration of the accumulated fragments or vessels forming a narrative where multiple authors are to be credited just as ancient monuments had not one genius architect but where conceived and made under greater collectives. Our Obelisk will bring the virtual space into the physical environment with cooked narratives, not just numbers. Our colours will be Red, Green and Grey. We envision an Architecture mathematically immeasurable and poetically meticulous.

“He laid hold of the diverse fragments of his

accidental fate and forged them into a whole – a fictional whole, it must be said.”

bake it, smash it with us!

“Accidents or destroying something can lead to something good. Very controlled things, not being open…these boundaries they screw you…You sometimes have to make a huge mess and make big mistakes to find that thing, that you’re looking for.”

Layout of Mega-drawings in wall in studio

Deadline for all ceramics.

Tutorials in workshop to expand narrative.

“In the depths of matter there grows an obscure vegetation; black flowers bloom in matter’s darkness. They already possess a velvety touch, a formula for perfume.” -

Rodin in his studio

Gate of all nations

Breath of the pot

REFERENCES Bachelard, Gaston The Psychoanalysis of Fire, Water and Dreams: An Essay on the Imagination of Matter, Earth and reveries of will : An essay on the imagination of matter. Goethe, Johann Wolfgang, “Die Natur: Fragment” [Nature: A Fragment], in Böhler, Michael (Ed.), Schriften zur Naturwissenschaft: Auswahl Greg Lynn The Archaeology of the Digital N. Katherine Hayles My Mother was a computer Works by Mariko Mori

KEYWORDS _Archaeology: the study of human history and prehistory through the excavation of sites and the analysis of artefacts and other physical remains. _Baking: transformation process of the clay into metamorphic rock. _Clay: a stiff, sticky fine-grained earth that can be moulded when wet, and is dried and baked to make bricks, pottery, and ceramics. _Data Bank: https://en.wikipedia.org/wiki/Data_bank _Isomorphic Algorithms: (better known as ISOs) were a race of programs that spontaneously evolved on the Grid, as opposed to being created by users. Their existence was considered a miracle by Kevin Flynn; however, Clu considered them be an obstruction in his mission to create the perfect system. _Kintsugi: Japanese art of repairing broken ceramic fragments with gold. ‘It treats breakage and repair as part of the history of an object, rather than something to disguise’ (Wiki). _Kitbashing: https://en.wikipedia.org/wiki/Kitbashing _Katamari: ‘a magical ball that allows anything smaller than it to stick to it and make it grow—and collect enough material for him to recreate the stars and constellations.’ https://en.wikipedia.org/wiki/Katamari_Damacy _Polygon: https://en.wikipedia.org/wiki/Polygon _Unearthing: the process of revealing

nasios varnavas | architect | arb Nasios grew up in Nicosia – Cyprus, where his architectural anima flourished between lines, thresholds and obscure histories. He studied Architecture at the University of Bath and has completed his education at the Bartlett School of Architecture - MArch Architecture/ RIBA II in 2014 with distinction. He has worked for leading design offices – Kengo Kuma Associates in Tokyo, Coop Himmelb(l)au in Vienna, and for Prof.Will Alsop in London who he worked for, side by side as a designer and painter. More recently his passion for digital tools, fabrication and craft, lead to a position at Based Upon, directing the R&amp;D on new projects. Nasios has been involved in academia as a guest critic at the Bartlett, AA, and University of Greenwich where he also co-run Alsop’s Unit 1. Currently he is an undergraduate Design Tutor at the University for the Creative Arts and a Visiting Tutor for Media Studies at the AA. His work fuses digital and analogue techniques into novel meditations that envision architecture as an ephemeral amalgam guided by destruction and construction. Nasios believes that architecture, similar to fishing, should involve travel, long stories, preparation, anticipation and daydreaming. negmarchs.com

patricia mato-mora | ma(rca) | mrbs Patricia grew up in Palma – Mallorca, her young imagination soaked up by the stories of mercenaries, mermaids and buccaneers that lace the collective imagination of the Balearic archipelago. She was particularly captivated by the island’s landscape and architecture, containing numerous traces of legendary maidens’ and dragons’ adventures. In an attempt to harness these stories into spatial experiences, Patricia studied architecture at the Architectural Association, where the constellation of references that now pepper her work – from Bachelard to Blade Runner – was formed. She also studied materials at the Royal College of Art, and has been a resident sculptor at the European Ceramic Workcentre (2016), Konstfack University of Art and Design (2017). Fascinated with the translation from digital to physical, Patricia has worked as a digital craftswoman and fabricator since 2013, in Factum Arte in Madrid; Millimetre in Brighton, and independently for Heatherwick Studio and Magdalene Odundo OBE. Patricia is a First Year Studio Tutor and Technical Studies Ceramics Tutor at the AA; where she has also taught alongside Ana Araujo (2015-17). She has been a visiting critic at Leeds Metropolitan, the University of Cambridge, Chelsea College of Arts and Design, as well as a Design Studio Tutor at the University for the Creative Arts (2013-17) pmatomora.net