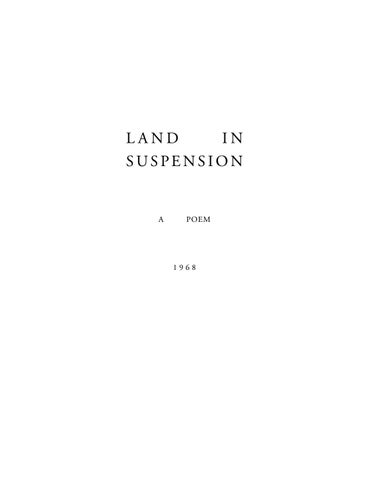 itled Land in Suspension, the poem charts the destinies of four towns of the Belice valley in western Sicily, which were completely destroyed, relocated and remade after the 1968 earthquake. The largely forgotten agricultural hinterland is perhaps best known by Alberto Burriâ&amp;#x20AC;&amp;#x2122;s Cretto, a vast expanse of concrete islands entombing the ruins of Gibellina, a town founded in the late 14th century. Gibellina, Salaparuta, Montevago and Poggioreale were virtually unknown in the Italian mainland before the earthquake, and still remain today in anonymity with dwindling populations, save for the new ghost-town of Gibellina that has gained status as one of the largest outdoor art museums in the world. The poem is composed over the course of three trips to the Belice Valley, where I have made correspondences with generous individuals and archives, and traversed the long distances separating the ruins and new towns,whilst surveying the remains of 1968, and the erosion of urban experiments that had been initiated with misguided vigour, then aborted or left unfinished. Having borne witness to its own inadequacy, architectureâ&amp;#x20AC;&amp;#x2122;s medium here takes form of a testimony and a counter-song to the vast excesses of architectural and artistic production in the reconstruction of the four towns. The voice of the poem is suspicious of the agency of the singular architect, and speaks instead in the tongues of the inheritors of ruins: the pioneer species, the stray dogs, and those inhabitants who try to make sense or to make do with the double catastrophe, natural and man made. In this territory, where the agency of rebuilding and construction has been exhausted, the architect-writer can give the ruins and new towns the possibility to be read together for the first time since their displacement, providing the knowledge and preparing the ground for future adjustments of the eight sites by their human and ecological community.

The verses follow and give form to the potentiality of the sites that is built upon the earthquake’s unexpected gifting to the land its suspension, a new status in the abandonment and non-use of spaces engendered by seismic force and incomplete reconstruction. Coinciding with the process of writing this thesis, I was translating Giorgio Agamben’s first poem Radure (‘Clearings’, 1967) that predated his philosophical vocation from Italian to English. His poem unfolds a succession of ‘clearings’ – images of potentiality – which emphasises upon the special modality independent of actualisation, a realm of inherent possibility present before and in every act, every architectural project, every work of art. To place potentiality at the centre of thought here in Land in Suspension, is to give primacy and attentiveness to the questions that can form the foundation of an architectural knowledge: Gibellina, its museumfication; Salaparuta, the banished Archive of Reconstruction of the entire Belice Valley; Montevago, the preservation and use of the 1968 rubble, and Poggioreale, the romanticisation and enclosure of the entire intact ruin. By virtue of their suspension, these conditions share a disjointedness with present time that can be detected by the architectural survey and elucidated in drawing, without which its traces of their distinct latencies would be lost. The stanza, or verse in poetry, is at once the basic vessel for the poetic line, and a space in its own right referring to its literal meaning in Italian, that is ‘room’. This ‘room’ was reinterpreted anew by Stéphane Mallarmé in Un Coup de Dés (1897), which considers the whiteness of the page as its entire canvas, and each word’s typography, placement and the negative space it engenders as inextricable from its meaning. It is this intimacy between free verse and the textual space that the poem seeks as a basis for a language for the afterlife of ruins in the Belice valley. To translate is to move something from one place to another (Latin translat- ‘carried across’), from the act of displacing entire towns to the physical manifestation of the urban plan. Interwoven with renderings of Siculo (Sicilian language) to English, the poem becomes the site for micro translations of found conditions and objects from the valley. Imbued with new meaning and use, they are shadows recast from their current reality, connecting minor histories to form an interlocking constellation on the page, language that translates the poem itself to the readers of the Belice Valley.

* The poem was first printed in a large book format, with each spread measuring 1000 x 650 mm. It is intended to be read on an easel with a film projection over the pages, which casts additional archival material, films, photographs and drawings onto the printed content. A photographic record can be found in the reference matter. The translation of Giorgio Agamben’s Radure (‘Clearings’, 1967) can be found also in the reference matter.

Centre of the Earth

30 km deep had finally stirred after geological epochs of sleep

a small adjustment of the ground warranted

Land of Suspension Ruins of Poggioreale, 2017

The force of seismic energy and utopian reconstruction brings into being

Lavuratori and The Cycle of Wheat Gianni Nastasi (1982)

in the new abandoned cultural institutions, at the sites of ruination (the paths between concrete swathes fallow land and cultivated land) at Burriâ&amp;#x20AC;&amp;#x2122;s Cretto

of land in suspension between the grounds of the ruins

Teatro Consagra on one end, lavori in corso; work in progress the townâ&amp;#x20AC;&amp;#x2122;s nucleus without audience nor play an empty stage Cretto on the other, strata of deserted layers of time a fresh layer of paint over cracks and lichen plateaus for new vistas

The fences of Teatro Consagra are removed, the stage

for the first time,

Salaparuta, where winter sleeps and the Archive of Reconstruction

Nearby, languishes an open archive at a carpark edge of town discarded, a heap â&amp;#x20AC;&amp;#x201C; elements of the turreted facade of Chiesa Madre (the last of Sicilian Baroque in Western Sicily)

remnants from 4 km away at the shadow town

Unlock the doors to the Archive of Reconstruction â&amp;#x20AC;&amp;#x201C;

constellation of eight sites, beginning from the nave of Salaparutaâ&amp;#x20AC;&amp;#x2122;s Chiesa Madre

form a estranged always from for future survey

Montevago, the autumn of harvesting

the crop of ruins kept

down the road no fetishes to be revered

rubble, like limestone from the nearby quarry, material, obtained by rupture seismic and sheer will for construction, imprinted with its secret negativity.

In the year the ground once by seismic force

second by the drill of extraction, a new quarry founded in the same year.

The opening of one for limestone, another, the rubble

two quarries, left in the wake of the momentous shifts on a January evening, weathering in the decades

Now, intermingling of stone, concrete and clay, ripe for use Gabions, of debris already crushed by time reinforcements in the new town

Poggioreale, of the most intact seismic ruination,

the spring of the afterlives and ideological ruination

the 15th century town waits, behind gates discouraging unauthorized entry upon the soil

soil, untended and stony yet enough for those species that need very little,

Annuals, biennuals perennials, to follow, in an opening in the land of suspension a coming community

Opening gates to a garden already creeping into life

Scaffolding in compression, scaffolding as trellis – pergolas at failing structures

Replenish soil in cracks and slips, for new species to join Ailanthus Altissima –

The poem was first printed in a large book format, with each spread measuring 1000 x 650 mm. It is intended to be read on an easel with a film projection over the pages, which casts additional archival material, films, photographs and drawings onto the printed content. The following is photographic record of selected spreads.

Projection of footage of the earthquake’s aftermath from ‘Immagini Rai del terremoto in Sicilia del 14-15 gennaio 1968’ by journalist Sergio Zavoli at Gibellina, and moving text ‘terrae motus’ over the first spread.

Projection of an artefact collected from fieldwork, a construction helmet marked ‘Alessio 13/G/NE’ and ‘MADE IN ITALY’ from the abandoned Teatro Consagra over the eleventh spread.

Projection of photograph (Christmas 2017) of the promenade built between the ruins of Montevago, with rubble falling over existing fenced off sections, over the sixteenth spread.

Projection of an artefact collected from fieldwork, a fragment of limestone from the debris amongst the ruins of Montevago over the seventeenth spread.

Chorus of the gaze,

I do not want to reign anymore.

What mask do I have to meet?

Beauty is destiny. How can a man

stop on his path and ask: this

is my destiny? How a wander is a measure of heaven?

Because the creatures appear in beauty

and suspend time, almost casting it up,

man has destiny; because with the heart he binds,

he without heart, to the divine procession of presence,

he can forget his solitude and say:

o god, do not abandon me!

One eye is destiny, and a world its journey.

Life: and the more of you we want,

the more we risk since

the abyss does not hold us;

a noi stessi e a te,

to ourselves and to you,

and a sonorous destiny

so that everything in us

And in solitude we want,

in solitude in the circle

and we are out of you,

in you we do not die,

We are the desert

a destiny of richness

marked by the ﬁgure

We hurl towards the gods

and we enter into the shadows.

Again to the ﬁre pushes us

And in her retired the word.

When will we be able to stop? Nowhere.

The passage into god, the opening through his empire

has taken away the divine

being in us, the consisting.

So we have to turn to art,