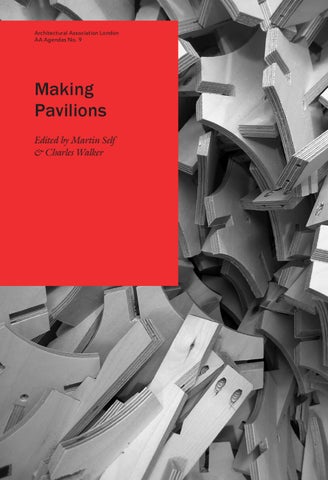 AA Agendas is an ongoing series of books launched in 2006 and produced by the Architectural Association School of Architecture. The series is designed to capture work generated through any number of the school’s design units, courses and other AA events and initiatives. Through the range of projects illustrated, the series reveals the breadth of the AA’s teaching practices and the vitality of the resulting student and staff work. Agendas 1: A Manifesto for a Cinematic Architecture Agendas 2: Bodyline Agendas 3: Before Object, After Image Agendas 4: Morpho-Ecologies Agendas 5: Typological Formations Agendas 6: Environmental Tectonics Agendas 7: Articulated Grounds Agendas 8: Nine Problems in the Form of a Pavilion Agendas 9: Making Pavilions Agendas 10: London +10 Agendas 11: Mediating Architecture

1:1 vs One-on-One by Brett Steele Introduction by Charles Walker and Martin Self

1:1 vs One-on-One: The Pavilion as Pedagogy Brett Steele To a stunning degree the history of modern (and more recently, late-modern and contemporary) architecture is the history of leaps into the unknown: into episodes of deliberate experimentation, partial coincidence and downright accidental forms of discovery. This reality is at odds with how architects – including their historians, theorists and too many architectural teachers – normally portray our discipline. This seems a paradox to me, given that architecture is a form of human knowledge whose very existence depends, ironically enough, on there being a future built world that will be different from today’s. (Of course, this certainty is what gives architects the remit for their mental and manual labour: their help planning the arrival of that future, one building or space or structure at a time.) What is also stunning, however, is just how inaccurate architects’ visions of the future so often are. In fact, architects seem to be some of the least capable people in the world when it comes to drawing up pictures or plans for what the future will look like. Their imaginations seem to get the better of them with such regularity that one can only read this situation as confirmation that imagination itself – rather than accuracy or predictability – is the quality architects treasure above all others. Indeed, some of the most striking examples of getting architecture’s future wrong lie with those individuals who are generally credited with being its visionaries: think of Le Corbusier’s City of Three Million People (never built even remotely in the form his books and drawings helped make seem inevitable). Similarly, Frank Lloyd Wright spent years with teams of collaborators trying to convince the world that its future would look like Broadacre City (a bizarre urban/ suburban vision that failed spectacularly, mostly for bearing so little resemblance to the realities of postwar planning and reconstruction in North America, Europe or any other part of the planet). A survey of many of the icons of a conventional narrative of modern architecture offers a list of grand-futuristic failures: from Hilberseimer’s Großstadt and entire New Brutalist cities imagined by Paul Rudolph to – at the other end of the spectrum – recent New Urbanist imagery suggesting that the city of the future will look freakishly like cities or towns from our past. I could go on and on, but you get the point – when architects try and draw a future, they frequently fall flat on their face. All of this offers a backdrop from which to observe another kind of hidden, oftenoverlooked, genealogy of twentieth-century architecture. It is one that runs counter to visionary declarations of well-rendered architectural futures, where we can witness successive generations of uneven leaps and bounds, made over and over again by architects who share little in terms of style, agenda or appearance, but plenty when it comes to an unswerving belief that architecture is only ever learned by getting your hands dirty – by discovering it one project at a time through mock-ups, installations or other kinds of 1:1 tests, by trying an idea out, by drawing, developing, testing and ultimately realising an unknown or provisional idea. This is done through the making of prototypes and full-scale models whose working difficulties and eventual results offer the designers vital insight and understanding into how they might take a next tentative step forward. This is the genealogy of minds, and hands, where the work of this book lies. This is the legacy that the AA’s Intermediate Unit 2 has plugged into so successfully. In the rarest of contemporary twists, this is also an awareness that the unit has converted

into a viable, enduring, educational strategy. The ability to turn the making of an annual pavilion into a series of successful, year-long collaborative learning experiences is the greatest achievement of the unit led by Charles Walker and Martin Self. These two tutors have guided successive waves of students across the full landscape of obstacles and opportunities created by an expanded definition of a design project, asking them to work across and realise initial concepts, develop ideas, tests, models, funding, planning approvals and eventual construct their work. For onlookers the resulting work has been remarkable; most interestingly, for me, it reiterates the AA’s concern with learning ‘by doing’ (we should recall that the 1970s reintroduction of the design unit system at the AA coincided with a major investment in and expansion of physical workshop spaces in the basement – the literal foundation of the entire school). It was a survey of the long legacy of prototyping and making at the school that convinced me in 2005 that the pavilion programme proposed by Charles and Martin could become the basis for an entire pedagogical plan – something they brilliantly conceived and evolved over the four successive years of projects documented in this book. If nothing else, these pages offer confirmation of architecture’s own willingness to embrace the single most undeniable aspect of architectural knowledge: as architects we only ever learn it one project at a time. The collective and not only collaborative means by which the students, staff, consultants and outside partners – including Finnforest especially – faced this challenge has been a wonderful and profound addition to the school; one recorded not only in the innovative series of pavilions that follow, but also in the example of shared, collective learning and teaching that lies at the core of our school’s unit system. On behalf of the entire school, my thanks to everyone involved.

Introduction Charles Walker and Martin Self This book documents six years of student work in the AA’s Intermediate Unit 2. It follows the chronological structure of the academic year and is broken down into three sections, corresponding to the three terms of the AA’s academic year, so while the projects over the years are mixed up, the overall flow from initial ideas to the four built pavilions can hopefully be traced. In the first term the unit focused on ideas and techniques. Each student authored 25 ideas in 25 days. A roller-coaster ride of invention, it was intended to exhaust the expected and reach into the unexpected. In parallel we developed techniques and skills, with workshops on parametric design, scripting and the use of algorithms as a generative tool. Each student ended the term with a pavilion concept proposal; in some years we held a competition jury to select the scheme(s) which would then be worked on collectively in the following term. This second term was concerned with design and documentation. The pavilions’ schematic designs were developed during the first six weeks, some years individually and some collectively. After that the focus switched to detailing, documentating and fabrication, producing a technically complete construction document by the end of the term. The last term was about realisation. Components and materials were ordered and a project manager and workshop manager were nominated to work with the design team to plan the production of the pavilion, fabricated over five to six weeks at Hooke Park. In the last two weeks of third term we erected the pavilion in Bedford Square where it would remain for the duration of the Projects Review exhibition. Within this tripartite structure for the book we have also tried to include voices from all perspectives: our thoughts as tutors; the students through their conversations about the unit; the critics in selecting which pavilions would be built; the workshop supervisor; and the (uncensored) public reaction seen through an online blog. The foundation and basis of the unit is described in Charles’ essay. Two years after Mohsen Mostafavi’s original invitation to Charles and Lip Chiong to establish a unit structured around the design of event pavilions, Brett Steele sanctioned the idea of developing the unit as one that actually built these pavilions. So we are very grateful indeed for the opportunity, support and freedom offered by both Mohsen and Brett. The premise of a temporary, sponsored, architecturally experimental London summer event pavilion was of course stolen from the Serpentine Gallery (indeed, in the first two years of the unit, that was exactly the site and brief for the students’ projects) and we are indebted to Julia Peyton-Jones for her brilliance in conceiving that model, and to Mark Robinson who demonstrated how to make pavilions happen in a few months. The full credit and thanks list is at the back of the book, but fundamental was our initial sponsor, Finnforest Merk, without whom no physical structure could have ever resulted. Their inexhaustible donation of Kerto and other timber, their technical advice and generosity in hosting the students in Finland and Germany were all incredible. As was Arup’s engineering support, by Nicolas Sterling, Glen Rust, David Rutter and Ching Lau, and the commitment of contractors Neil Phillips, Tony Ure and their team at All Timber Construction, who always managed to make things fit on site. Inter 2’s pavilions are part of an ongoing history at the AA of testing architectural ideas through making, both at Bedford Square and increasingly at Hooke Park, the AA’s woodland campus in Dorset where these pavilions were fabricated. Final and particular thanks therefore go to Charlie Corey-Wright and his family who provided the students with food, shelter, pastoral care and workshop guidance during all their weeks at Hooke.

Red lines indicate the authorship of proposals selected to carry on into the next stage of collective design development. One of these was built each year.

Offloading components that have arrived from Hooke Park, Fractal Pavilion, 2006

Over the past six years the students of the Architectural Association's Intermediate Unit 2 have designed and built a series of experimental pavilions. Structured to follow a year in the life of the unit, this book presents the processes of the pavilions' design and production, from concept ideas to workshop fabrication. Essays by the unit's tutors, Charles Walker and Martin Self, explain the ambitions and pedagogic basis of the programme, rooted in the idea of experiential learning. Through the voices of students, tutors and anonymous critics, both the educational validity of this innovative design-build programme and its architectural output is explored.