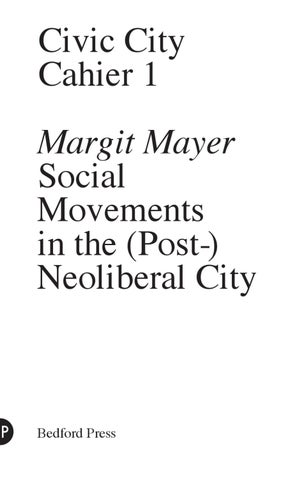 Bedford Press AA Publications Ltd. 36 Bedford Square London WC1B 3ES www.bedfordpress.org Bedford Press is an imprint of AA Publications Ltd. which is a wholly owned subsidiary of the Architectural Assciation (Inc.) Registered Charity No. 311083. Company limited by guarantee. Registered in England No. 171402. Registered office as above. The Civic City Cahier series has been initiated by Institute Design2context, Civic City Program, University for the Arts Zurich.

Visual Statements As a visual trigger for the conference â&amp;#x20AC;&amp;#x2DC;Design for the Post-Neoliberal Cityâ&amp;#x20AC;&amp;#x2122;, on which the Civic City Cahiers are based, the editors asked four graphic design practices, known for their critical approach and engagement with urban issues, to comment upon the debates to come. Zak Kyes, Manuel Raeder, Lehni-TrĂźb and Metahaven contributed works that speculate, both as inhabitants and designers, on paths towards a social, or Civic, City.

Visual Statement by Zak Kyes with Chus Martínez, London / Barcelona The mapmaker’s third suggestion was simply ‘Terra Incognita.’ The ‘a’ of incognita is given by the notion ‘terra’, but igcognito is what offers the most here In-kog-nee-toh: private, obscure to others …

To enter urban movements into the discussion of designing a (post-)neoliberal city, this text asks: How are todayâ&amp;#x20AC;&amp;#x2122;s movements different from those of the Fordist and post-Fordist city? How do they relate to the neoliberal city? Do they show a way towards a post-neoliberal city? In order to get a better sense of how contemporary movements have been affected by and are responding to the recent financial and economic meltdown, and describe how they have recently coalesced around the slogan â&amp;#x20AC;&amp;#x2DC;Right to the Cityâ&amp;#x20AC;&amp;#x2122;, I will first contrast them with their predecessors, and thus contextualise the emergence of the Right to the City movements in the shifting framework of political-economic regimes. I will then take a closer look at different versions of this motto, because its participatory demand for inclusion does not always mean the same thing. This is important, because, as I will try to show, it has 19

implications for urban planners, architects and designers interested in developing a city that is liveable and sustainable for all urban residents. Urban Movements from the Crisis of Fordism to Neoliberalism In the last thirty years, urban development patterns have become increasingly similar across the advanced capitalist countries, and forms of urban governance have converged so much that it is not surprising that the movements challenging and resisting them, across the global North anyway, have gone through very similar cycles. In the wake of the 1960s movements, the first wave of broad urban mobilisations reacted, as so many of the mobilisations of that era, to the crisis of Fordism. Struggles around housing, rent strikes, campaigns against urban renewal, against

what the German psychologist Alexander Mitscherlich back then called ‘the inhospitality of our cities’ (referring to the barrenness that Fordist zoning of urban space and suburbanisation had brought about), and struggles for youth and community centres were all politicised in a progressive manner by the wider ‘threat context’. This context was created not only by the student, anti-war, and leftist mobilisations of the 1960s and early 1970s, but also by the openings that governments (generally in the mould of a social-democratic compromise) allowed at that time. The protests, including those about public transport, childcare and other public services, all contested the cultural norms of the institutions of collective consumption, their price as well as their quality, and the limited options to participate in their design. In other words, they challenged the Keynesian city, in which the state

No to Design Comment on Margit Mayer’s ‘Implications for Designers’ Jesko Fezer When Margit Mayer presented her contribution to this publication at the Zurich conference ‘Design for the PostNeoliberal City’ in March 2010, the discussion turned immediately to the last part of her lecture. Unsurprisingly, the attendant designers, architects, cultural producers and theorists were very keen on how Mayer’s critical analysis of urban social movements in the context of modifying capitalist, regulatory regimes could help designers specify the potential of their discipline for a social city. What role could they play in urban struggles? In which way could they connect with and assist urban movements? How could they practically resist the escalating mobilisation of urban space for economic exploitation? Since the ongoing convergence of forms of urban governance changed radically the relations between urban move­ ments and local states, as Mayer convincingly showed, it became clear that designers could no longer rely optimistically on existing strategies—like, for example, re­­ formist, cooperative and participatory design approaches. These well-intended techniques, which also include temporary or process-based modes of design, run the risk of overseeing their inclusion in the current system; they produce exactly these short-comings, which make the fight for a right to the city so urgent. They tend to ignore the ‘underlying economic policies that systematically produce exploi­ta­tion, poverty and exclusion’. 1 This is especially

important considering that designers are likely to relate their actions to their own cultural and social milieus, which are, for ex­ample, embedded in the problematic rise of the Creative City, and therefore amplify gentrification processes or produce segregated urban enclaves of (sometimes even alternative) good living. The current instrumentalisation of creativity in many Western metropolises as an economic and social imperative shows once again how effective neoliberalism is in ‘hijack[ing] and inte­ grat[ing] oppositional and rebellious claims and repertoires into its regime’. 2

critical consciousness ‘when facing the enormous imbalance between the centres of power and the people sub­ mitted to these powers. Because this imbalance is deeply undemocratic insofar as it negates participation. It treats human beings as mere instances in the process of objectivisation (Verdinglichung) and commodification’. 5

To be able to simply think of an alternative or an opposition to the brutally integrative character of neoliberalist urbanisation, the claim of a ‘Right to the City’ offers a helpful perspective. What U.S. Marxist geographer David Harvey characterised as ‘one of the most precious and yet most neglected rights’, 3 could indeed help to clarify an obscured emancipatory potential of design. The Right to the City means more than mere access to urban resources. It is ‘the right to change ourselves by changing the city’. 4 This right to exercise a collective power to reshape the urban processes, should belong, as Margit Mayer adds, first to those deprived and in need of it. Or as Gui Bonsiepe—who taught at the HfG Ulm and is currently working in Argentina as a designer and theorist—puts it: ‘In the field of design it means to focus also on the excluded, the discriminated, and economically less favored groups as they are called in economist jargon, which amounts to the majority of the population of this planet.’ He argues for an emancipatory understanding of design in the sense reducing of domination, and intends to foster a

Related to this escalated tendency of commodification as a form of domination over and exclusion from the Right to the City, maybe Mayer’s casual reference to the option ‘not to design’—even though it sounds so obvious—is something to be taken seriously, even despite the fact that the audience at the conference didn’t seem very enthusi­ astic about the idea. A young professor asked how to explain it to his students; some practitioners told the old story that if they refused a job, others would do it instead, and spoke of their belief in being able to affect a client or a brief. One student of visual communication mentioned her intention to reduce the negative effects of the client’s approach by accepting a job. Such (understandable) selfdefensive argumentations, which of course come from a radical competitiveness to survive economically, overestimate the impact of ‘experts’. Even though we wouldn’t be able even to think about design without certain optimism and naïveté, an analysis such as Mayer’s convincingly shows that, without a critical understanding of the political situation, even such a thing as a social movement that contests urban governance can fail; it can unwillingly help to reform power structures, or easily become integrated in them. At a certain point, it is probably as simple as U.S. urban theorist Peter Marcuse stated: ‘The first and the most important one in practice is a very simple one: that is

Margit Mayer teaches comparative and North American politics at the Freie Universität Berlin. Her research focuses on comparative politics, urban and social politics and social movements. She has published on various aspects of contemporary urban politics, urban theory and (welfare) state restructuring, much of it in a comparative perspective. Currently, she is coediting a book on neoliberalising cities and contestation, as well as writing a monograph on urban social movements and the state (WileyBlackwell). She has served on the board of the Trans-atlantic Graduate Program ‘Berlin-New York’, as editorial board member of The International Journal of Urban and Regional

Research and as Trustee of the Foundation for Urban and Regional Studies. She presently serves on the editorial advisory board of Mobilization and of Il Dubbio, and was previously on the editorial committee of the book series ‘Studies in Urban and Social Change’ (Wiley-Blackwell). Mayer is coauthor of Nonprofits in the Transformation of Employment Policies (Westfälisches Dampfboot, 2004), co-editor of Urban Movements in a Globalising World (Routledge, 2000) and of Politics in European Cities (Birkhäuser, 1993).

Margit Mayer looks at contemporary social movements that contest neoliberal urban development by invoking the Right to the City, a motto originally coined by Henri Lefèbvre in the 1960s. Mayer contrasts these new movements to those of previous phases in postwar, political-economic development, and thus establishes a set of correspondences between consecutive urban regimes and shifting forms of contestation.