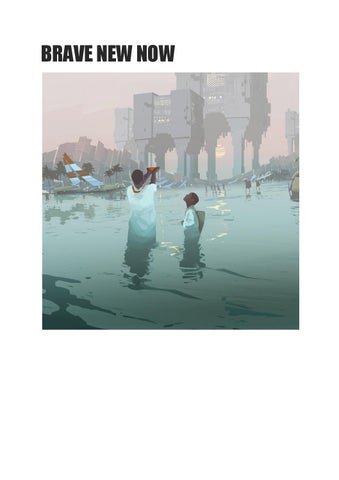 Brave New Now is a collection of specially commissioned short stories set in a fictional future city developed by speculative architect Liam Young of the AA’s Diploma 6 Unknown Fields Division for the 2013 Lisbon Architecture Triennale. Authors have been invited to inhabit the city, to breathe life into its characters and cultures and give form to its streets and spaces through narrative. It is a speculative urbanism, an exaggerated present, in which we can imagine the wonders and possibilities of emerging biological and technological research.

FOREWORD By Liam Young Future Perfect: Exaggerating the Present Coastline, Future Perfect Concept Art, Hovig Alahaidoyan, 2012 Nothing dates like images of the future. Architects have always imagined the possibilities of tomorrow’s cities. In 1939 visitors to the World’s Fair were given a badge emblazoned with the words ‘I have seen the future’. It was a souvenir of their voyage through time on board the General Motor’s Futurama ride. Sitting on an automated conveyor belt, visitors would travel through a model of the city of tomorrow, its skyscrapers, traffic lights, and tangles of interchanges and expressways. It was just a glimpse, a bubble of tomorrow that existed for a brief moment, before it was levelled into the baseball field that stands there today. Rumours persist of a surviving basement still under the field, filled with artefacts waiting for the time they promised, a forgotten archaeology of the future. We can imagine the decaying remains of other speculative cities, cities of nowhere, cities of folly, cities of our hopes and dreams, our most intimate desires and our collective fears. The rusted hulks of an Archigram Walking City, now propped up on blocks, their massive metal bodies stripped down to their frame by futurist souvenir hunters and steel salvage yards. The dozers have moved in on what remains of the cruciform foundations of Le Corbusier’s Radiant City. Their concrete corners have been worn smooth from decades of skateboard grinds and graffiti removal teams. The players of Constant’s New Babylon have closed their show, packed their ladders and drawn the curtains. The endless grid of Super studio’s Supersurface, that once stretched endlessly beyond the horizon has been pulled up and resurfaced. The blinding white has mildewed and tree roots have skewed and cracked the parallel lines. The tiled landscape has been reclaimed and now paves the food courts of distant strip malls, soaking up spilt milkshakes. There is melancholy and relief as we surrender any attempt to build these cities or prevent their passing. They weren’t imagined for that purpose. They weren’t designed to be constructed, just to be explored, to be debated and discussed, to be loved and hated, fought over or wished for. Speculative cities do not just anticipate but actively shape technological futures through their effects on the collective imagination. They are one of the few places that offer a critical view back on the present cities we currently inhabit. Their towers are high and their distant lands are far enough away for us to stand outside of the everyday and look back in on it. Only in these accounts of the future are we able to determine, with their buildings and technologies condemned to decay and their dreams unrealised, the paths to follow through the unmappable.

Urban Tectonics, Future Perfect Concept Art, Daniel Dociu, 2012 Architects, designers and engineers once speculated on the impacts of industrialisation and then mass production. As the economy collapses and the city is being reshaped by new technologies, the future is beginning to become a project again. The traditional city infrastructure of roads, buildings and public squares are giving way to ephemeral digital networks, biotechnologies and cloud computing connections. The physical city we know is destroying itself and the city is again in question. In a time of crisis we need to once again be exploring big visions and bold gestures. It is not the time to retreat. As we imagine speculative cities of the imminently possible, we begin to enact alternative forms of spatial practice, whereby architects, designers and artists can again play a critical role in exploring the implications and consequences of emerging technologies. Fiction is a powerful medium through which we share and discuss our hopes, fears and anxieties about the futures we want to have. Cast as a provocateur and storyteller, the speculative architect instigates debate, raises questions and enables the public as active agents in the future of their cities. The tactics of speculation can bring us closer to the technologies that are increasingly shaping the urban realm and the scientific research that is radically changing our world. A projective fiction is a critical tool that is both an extraordinary vision of tomorrow and a provocative examination of the pertinent questions facing us today.

Urban Form, Future Perfect Concept Art, Daniel Dociu, 2012 Future Perfect is a fictional, future city. It is an imaginary place developed with a think tank of scientists, technologists, futurists, illustrators and science fiction authors who all came together to collectively developed this imaginary place, the landscapes that surround it and the stories it contains. Working with concept designers from the video games industry and motion picture special effects artists the conversations and debates of the think tank were translated into visual and physical form. Project collaborations were forged between designers, scientists, technologists and authors to develop a constellation of works that can be inhabited as large scale districts of the future city. Movie miniature models, illustrations, installations, props and performances have all been developed for the Future Perfect exhibition at the 2013 Lisbon Architecture Triennale. The fictional city has been formed as a stage set for a collection of stories, emerging infrastructures and design experiments. It is a speculative urbanism, an exaggerated present, in which we can explore the wonders of cutting edge biological and technological research and envision the possible worlds we may want to build for ourselves. This Brave New Now ebook is a collection of specially commissioned short stories set in the Future Perfect city. Authors have been invited to inhabit the city, to breathe life into its characters and cultures and give it form to its streets and spaces through narrative. It is a city best imagined through the stories we might tell about it. These speculative fictions are illustrated with a collection of photographs of the present, gathered from a group of photographers who venture out into the world documenting the weak signals and emerging phenomena that have been extrapolated into our imaginary city. In Brave New Now it is not clear what is fact and what is fiction, but rather the two productively intertwine. The two modes of working sit side by side and we slip suggestively between the real and the imagined, between the documentary and the visionary, where speculative fictions become a way of exploring a world that the everyday struggles to grasp. The future is not something that washes over us like water, it is something we must actively shape and define. Some of the people we meet in the Brave New Now are swept up in what the city could be, others are reserved and look on with caution. It is a place of wonder and of fear. We meet friends and strangers, we hear their stories, and we imagine our own life here. We have not walked these streets before, what things may come, in the Brave New Now.