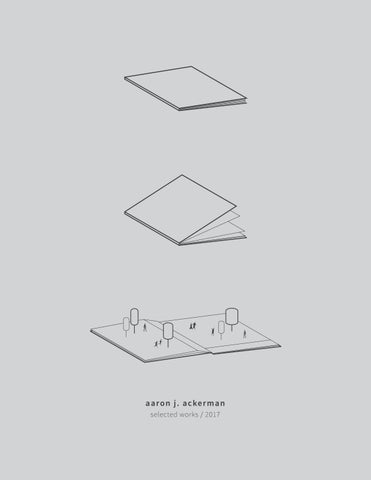 about This book is progress statement of my pursuit of a graduate degree in landscape architecture. It represents my creative process, design flexibility, technical skill, and evolution as a student. Merging my background in urban and environmental planning with design, these works exemplify a comprehensive understanding of the physical and cultural processes that shape environments and envision creative design solutions that realize the complexities of the modern landscape. Works were chosen that communicate design solutions driven by both analytical procedure and artistic narrative in varying scales and contexts.

wash SYSTEM DEMONSTRATION &amp; PLANTING PLAN SCIENCE COURTYARD, CAL POLY POMONA SPRING 2015 ocated on the Cal Poly Pomona campus, the sciences courtyard is a half-acre intimate space encased on all sides by classroom facilities. Generally underused, the current courtyard primarily functions as a space funneling pedestrian flow moving to and from the surrounding classroom buildings. It lacks basic elements that encourage use and comfort. Hot temperatures, lack of shade, wind, and evaporation add to the difficulties of enjoying the space.

The intent of the design was to re-envision the space as a landscape that could be both an amenity and a living laboratory for students and professors. Designed to imitate a desert wash, it would function as a low water landscape and demonstrate ecological drainage processes. Educational opportunities for increasing student understanding of landscape, rainwater accumulation and harvesting, and the benefits of low impact stormwater management would ultimately be achieved.

WATER EFFICIENCY Planting design for the landscape was developed for water use efficiency, adhereing to the hydrozone model of considiring both sun exposure and plant irrigation demand. A majority of the landscape contains very low water use desert adapted plants, that perform well in the warm, dry climate of Pomona.

Estimated Total Water Use (ETWU) was calculated for the design based on local reference evapotranspiration rate, plant factor value, the area of each irrigation hydrozone, and irrigation efficiency. Irrigation demand in gallons per year for the landscape is as follows: Irrigation Zone 1 (7,068 sf) - 164,575 Irrigation Zone 2 (200 sf) - 5,603 Irrigation Zone 3 (300 sf) - 13,071

SYSTEM DEMONSTRATION The design envisions a zero runoff landscape that is capable of containing, infiltrating, and harvesting rain water of a 24 hour 50-year rain event. Average roof and surface runoff of a rain event this size would be expected to produce up to 1,270 gallons of water. Much of this water would be directed to a central infiltration basin, designed with a capacity to hold up to 1,500 gallons. Rain water filling the basin could be captured and held in a subsurface storage tank and later tapped for irrigation reuse.

he proposed design will create a community open space and sports park with an active and accessible river edge located on 20 acres adjacent to the Kern River in Bakersfield, California. The driving theme of the design is inspired by the ecological and cultural services of the river. In addition to providing unique vegetation, wildlife habitats, and open space, the river is a major cultural and recreational corridor for the City and is a distinct riparian visual relief from the dry flat character of the Bakersfield basin. The design envisions a variety of community sports fields and a reinforced connection between the park and river. Moments of introduced channelization would split and slow river flows at the parkâ&amp;#x20AC;&amp;#x2122;s edges, allowing visitors to interact and experience the water in new ways. Design throughout the park reinforces the river theme. A childrenâ&amp;#x20AC;&amp;#x2122;s playground would include educational water features that could mimic rise and fall of river flows. Furthermore, the proposed bike and pedestrian nature trails take on serpentine like river forms, flowing through a palette of grasses, wildflowers, and oak trees.

Area of fill inteded to channelize river. Planted with native riparian species. Not intended to be accessible.

river edge scenario Re-envisioned edges along the channel bank will take on a variety of ecologically sensative, minimal form typologies, including gentle steps as shown here.

A network of pedestrian trails are envisioned for the park, providing access to natural spaces and passive recreation opporunities.

A regional bicycle trail spans the park’s southern boundary, connecting to and extending the City’s existing network of bicycle infrastructure.

â&amp;#x20AC;&amp;#x153;AVAâ&amp;#x20AC;? WOOD BENCH DESIGN &amp; BUILD SPRING 2015 his project was an assignment for our landscape construction class, and was a collaboration with first year graduate students Luis Pedraza and Kevin Maynard. The concept for our bench started off from three radically different ideas. The first idea utilized a wheelbarrow style bench; the second, was a symmetrical design with two planters bookending a seating area; and the third idea, which was the one chosen, was a simple modern style with a shelf below the seating area. Part of what is unique about this last concept was that (for the most part): all the fastening bolts which were used to connect the pieces. Also, one piece of wood was used for the entire construction (2 x 4s). The simple linear concept reflects a clean and efficient building style and presents well. The bench is sturdy and handsome and provides ample access for books or plants in a shelf area that spans its entire length.

In addition to assisting with the design and build of the bench, I completed the design of the booklet and photographs, which is what is illustrated in this spread. Our bench was one of five selected by the professors to be placed in the Japanese Friendship Garden in Balboa Park, San Diego.

4 X 4 DOUGLAS FIR SHELVES 4’5” NO OTE: A LL 4X4 4X4 JOINED JOINE ED BY SCREWS AND FINISHING N NAILS IN NOTE: ALL BETWEEN B ETWEEN LAYERS AS S TO NOT BE VISIBLE E

uilt in 1880, the Harada House National Historic Landmark embodies the Japanese American immigration experience in California. It is the saga of one familyâ&amp;#x20AC;&amp;#x2122;s struggle to achieve the American promise of freedom, citizenship, and a better life for their children. Donated to the City of Riverside in 2004 and managed by the Cityâ&amp;#x20AC;&amp;#x2122;s Metropolitan Museum, the Harada House and neighboring property (Robinson House) are envisioned to be preserved and repurposed as a historic museum and garden for the City, telling not only the story of the Haradas, but the struggles of immigrants to the United States. Guided by two primary goals, the design for this undertaking intends to enhance the historic and cultural significance of the Harada House while creating a space that evokes peaceful individual reflection and unification. Features include a central radial focal form housing an upper outdoor courtyard and sub level theater and exhibit hall. These spaces are connected by an elongated ramp, intending to gradually tell the story of the Haradas as visitors move through the space. This project was a collaborative effort between myself, former landscape graduate student Daniel Lee, and visiting Taiwanese architecture student Sandy Kao.

90% of U.S. trade through Los Angeles Port is with East Asian Countries

n 2016 more than $200 billion worth of goods will pass between Asia and the United States through what is presently the 9th busiest port in the world, the Port of Los Angeles/Long Beach. As a major hub of economic activity, the Port is also a major source of pollution, posing serious environmental impacts and local public health issues for neighboring communities. This project begins address this growing conflict. This project was undertaken for the purposes of exploring system design and application of landscape architecture in the realm of goods movement. Specifically, the project examines the Portâ&amp;#x20AC;&amp;#x2122;s cargo distribution system and the resulting effects it poses to public health issues throughout Southern California. Analysis identified correlations between Port generated pollutants, local health trends, and community demographics, and explored measurable performance applications of landscape architecture and their potential for improving public and ecological health through enhancing the Port as a multi-functional distribution system. Public Good(s) focuses on a 117 acre site located four miles north of the Ports, in the City of Los Angeles. Design decisions were primarily driven to address harmful impacts resulting from Port activity. The project explored and compared the most effective design opportunities that performed mitigation, from large scale systematic operation of Port activity, to site specific efforts. The resulting design seeks to re-interpret the site as a multi-functional operation for enhancing distribution efficiency, while improving the public and ecological health of the region. This project recieved the 2016 Student Merit Award from the Southern California Chapter of ASLA. P UBL IC GOOD ( S ) / 26

So un dP re ss ur

Trees can intercept up to 85% of airborne particulates

One tree absorbes 48 lbs. of carbon dioxide per year

The world is not to be put in order; the world is order, incarnate. It is for us to harmonize with this order. - Henr y Miller 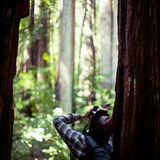