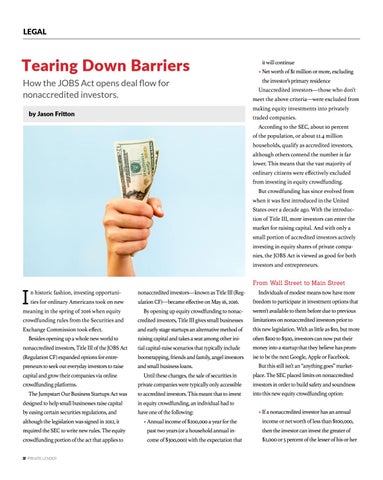 Tearing Down Barriers How the JOBS Act opens deal flow for nonaccredited investors.

• Net worth of $1 million or more, excluding the investor’s primary residence

According to the SEC, about 10 percent

of the population, or about 12.4 million

households, qualify as accredited investors, although others contend the number is far

lower. This means that the vast majority of ordinary citizens were effectively excluded from investing in equity crowdfunding.

But crowdfunding has since evolved from

when it was first introduced in the United

States over a decade ago. With the introduction of Title III, more investors can enter the market for raising capital. And with only a

nies, the JOBS Act is viewed as good for both investors and entrepreneurs.

freedom to participate in investment options that

crowdfunding rules from the Securities and

limitations on nonaccredited investors prior to

Besides opening up a whole new world to

raising capital and takes a seat among other ini-

ise to be the next Google, Apple or Facebook.

meaning in the spring of 2016 when equity Exchange Commission took effect.

By opening up equity crowdfunding to nonac-

and early stage startups an alternative method of

this new legislation. With as little as $10, but more

tial capital-raise scenarios that typically include

money into a startup that they believe has prom-

Until these changes, the sale of securities in

private companies were typically only accessible

in equity crowdfunding, an individual had to

The Jumpstart Our Business Startups Act was

by easing certain securities regulations, and

although the legislation was signed in 2012, it

required the SEC to write new rules. The equity crowdfunding portion of the act that applies to 32 PRIVATE LENDER

weren’t available to them before due to previous

to accredited investors. This meant that to invest have one of the following:

But this still isn’t an “anything goes” market-

investors in order to build safety and soundness into this new equity crowdfunding option:

• If a nonaccredited investor has an annual

income or net worth of less than $100,000, then the investor can invest the greater of 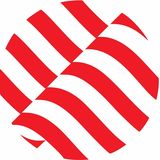