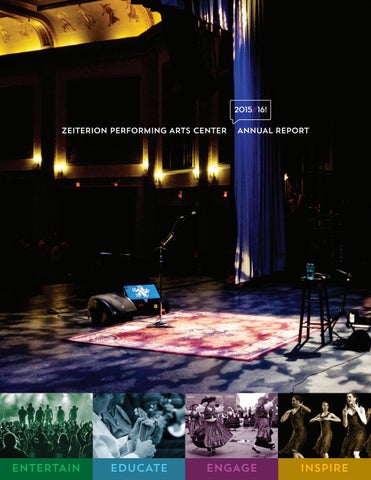 The Zeiterion Theatre entertains, educates, and inspires our community by presenting a diverse array of high quality performing artists and providing engaging learning opportunities that contribute to the cultural, social and economic vitality of the South Coast.

Welcome to The Z’s 2015/2016 Annual Report. It is with great enthusiasm that we share with you, our Z community, the many stories of the past season.

VISION To create a shared human experience that enriches people’s lives by harnessing the power of the performing arts to connect generations, unite diverse groups, and open a world of creativity and new possibilities for all.

The Z is a storied place. It has had many lives over the decades and has inspired countless tales to blossom. Many of these stories are told on our stage by the world’s best performing artists. However, what really makes The Z such a special place are the personal tales of your experiences here. Over the past season, we set out to capture those stories. On the following pages, you’ll find a small collection of our favorites. There are the stories of our dedicated and gracious ushers that welcome you into our beautiful theater at each and every show. Or the often untold story of The Z’s education program, as told by one of our first Teen Ambassadors. At the center of our story every year are the mainstage performances, as told in pictures. And perhaps one of our proudest moments, the story of the first annual Viva Portugal! festival - a beautiful collaboration that highlighted our rich Portuguese community. Here at The Z, we are so proud to tell the story of a thriving and bustling performing arts center. One that hosted over 254 events this season, selling out 40% of the 65 mainstage performances. Collectively, the Board of Directors and staff worked tirelessly to complete a new three-year strategic plan. A plan that looks closely at your Zeiterion experience and considers how we can work more closely with our city and community to improve access to the arts. Once again, to accommodate our growth, we’ve added new staff positions, including our first full-time Education Manager. Please join us as we peel back the curtain and reveal to you our “stories untold” of the 2015/2016 season. At the heart of our story, of course, is you. Without you, our beloved community of supporters, this story cannot be told. We are eternally grateful to you for allowing us to bring the world to your doorstep. Thank you! Warm regards,

Peter Hughes Chair Board of Directors

SPOTLIGHT HONORING THOSE WITH

My career as an Early Childhood Educator brings me in contact with youngsters of all ages daily. I look forward to evenings volunteering at The Z when I can interact with adults who enjoy varied, high quality entertainment. Being an usher gives me the opportunity to help people directly. Whether it’s by taking their tickets, showing them to their seats, welcoming them into the theatre or member lounge, or holding a door open for them, I feel that I have enriched their lives as well as my own. They have come to a place that is not only beautiful but also warm and welcoming, and I love being part of that. Ushering at The Z has also allowed me to see so many wonderful programs. There is entertainment of all sorts: musicals, drama, comedy, dance, music from all around the world, and fun family performances. Having been associated with the Zeiterion for so long, I have made enduring friendships with other volunteers and members of The Z ‘family.’ I am thankful for being part of such a worthwhile endeavor.”

Farwell enjoying an evening ushering at The Z.

Volunteering is a great way to meet new people who share your interests. We are like a family!” MARY CROTHERS Zeiterion Volunteer for 24 years

I started volunteering with my husband 25 years ago. It is really a wonderful experience. I feel like the volunteers are family, and it’s an honor to be part of The Z.”

THE Z LAUNCHED TWO NEW EDUCATION INITIATIVES FOR THE 2015/2016 SEASON:

EDUCATION Held on a semester schedule, The Z offers classes for learners of all ages and abilities in a variety of areas. Classes are taught by credentialed instructors in the performing and visual arts. THE Z’S CREATIVE CLASSROOM provides a safe and inviting environment for learners to hone their creative skills and socialize, further deepening their connection to the arts. Classes are offered at an affordable price, and scholarships are available. 2015-16 CREATIVE CLASSES OFFERED: ALL AGES ZUKES Ukulele lessons (Beginner and Intermediate) Backyard Dramatics AGES 7-15 Stories and Song AGES 1-6 AND CAREGIVERS Photography Fundamentals AGES 15-ADULT Salsa (Beginner and Intermediate) AGES 16-ADULT Acting AGES 16-ADULT Intro to Circus Arts AGES 7-12 Improv AGES 12-16 Musical Theatre AGES 8-15 Puppetry Workshop AGES 5-10

THE ZEITERION CREATIVE CLASSROOM AND THE TEEN AMBASSADOR PROGRAM

Before the ukulele, I had resigned myself to being nonmusical. Instruments seemed beyond my skill set, and my singing leaves much to be desired. When The Z opened up the Creative Classroom and formed The Zukes, I joined along with my two younger siblings. I started out frustrated; my fingers wouldn’t cooperate and my strumming was off-time. As weekly classes progressed, I realized that I was beginning to keep up with my classmates. Soon enough I was learning songs on my own at home. I even presented a song to teach the rest of the class – playing AND singing by myself! Since our ukulele class began, we’ve grown in size and skill - we now include over thirty people and have performed at nursing homes and even the Main Stage at the Madeira Feast! It’s a privilege to play with the rag-tag bunch of musicians known as The Zukes, and the classes have given me a personal, creative connection to The Z community. The Z is not only a place to watch amazing art, but to become a part of it!” SARAH MULVEY Member of The Zukes and Creative Classroom student

The Z’s 2015/2016 Teen Ambassadors participate in a stage combat workshop on the Zeiterion stage.

The Z’s 2015/2016 Teen Ambassadors gather in the theatre for a pre-performance discussion.

The TEEN AMBASSADOR PROGRAM is a free program consisting of 10-15 high school-aged students that demonstrate an interest in the performing arts, community engagement and have an aptitude for writing. Through the Teen Ambassador Program, students: • Participate in master classes and workshops • Attend world-class performances by an array of artists in genres they may not have otherwise been exposed • Contribute to the local youth community by authoring reviews of performances through social media as well as participating in local arts events • Gain exposure to behind-the-scenes operations at a nonprofit arts organization by working closely with the organization

Growing up in Fairhaven, I always had much anticipation and excitement for the next class field trip to the Zeiterion. These performances opened my eyes to theatre and had a huge influence on my involvement with the arts. When given the opportunity to participate in the Teen Ambassador program I couldn't say no. We were able to view a variety of shows, work with a coordinator to learn more behind the production, give our own opinions of each show, and sometimes even get to meet cast members! I loved the whole experience, especially the chance to work with The Z’s amazing staff. Going into college with a theatre emphasis, I can confidently speak that the Teen Ambassador program really opened my eyes to new aspects of arts and culture and heightened my passion for the performing arts." KENNEDY RYAN Teen Ambassador and 2015-16 High School Intern

Being able to perform for her was absolutely outstanding. She was really involved and interested in what we had to do.”

Viva Portugal is a daylong celebration of Portuguese culture, right in the heart of Downtown New Bedford! For the first time, The Zeiterion brought together the area’s leading Portuguese cultural organizations to produce a mini-festa featuring live music, cooking demonstrations, food, floats, vendors, art exhibits and more. Viva Portugal!, which is now an annual event, is free and open to the public. The day culminated in a Mainstage Fado performance featuring Nathalie Pires and Marco Rodrigues, followed by a fundraising reception with the artists, proceeds of which benefitted The Portuguese United School and The Z.

Congratulations to the entire committee, Zeiterion staff and volunteers, Viva Portugal was a huge success and I was honored to be a part of a special day in our city. It’s great to see such a hard working committee accomplish a huge initiative with a very successful day-long event that shined beyond our expectations. The sun was shining that day for sure! Kudos team Viva Portugal!” DAGNEY ASHLEY Director of Tourism and Marketing

Portuguese Folkloric Dancers perform of Purchase Street during the festival

Never have I been so proud to be Portuguese, and proud to be a member of a committee that truly focused to promote and preserve our culture. It was an honor to work with all of you, some of the most incredible people of our community. The enthusiasm was so prodigious that even the weather became a minor flaw. From Portuguese United for Education, we thank you for your support, kindness, and thoughtfulness. When people unite, anything is possible… VIVA PORTUGAL!!!” LESLIE VICENTE Portuguese United for Education

As Consul of Portugal in the region, I’m particularly happy for the great content we were all able to assemble (music, literature, gastronomy, sports, arts and crafts, painting…) showcasing the rich and diverse culture of Portugal (mainland, Azores and Madeira). But I’m even more satisfied for the fact that great Portuguese, Portuguese-American and American organizations get together to work as a team in putting this project in motion. This is for me – personally and professionally – the most valuable result of the whole initiative.” PEDRO CARNEIRO Consul of Portugal

It was so wonderful to be a part of this committee. I'm grateful to the Zeiterion for providing us this opportunity to work as one. It was a great experience and a wonderful event. Looking forward to the next one!” LARA HARRINGTON Azorean Maritime Heritage Society

This April, The Zeiterion stage was once again transformed into the elegant and exotic setting for the ANNUAL SPRING GALA. A hopping Cuban Cabaret drew nearly 200 guests for an evening of food, fun, and fundraising. The gala and silent auction raised nearly $65,000, which benefits The Z's mission driven programming. GALA HOSTS

2015-2016 CORPORATE SPONSORS The Z is grateful to the local and regional businesses for their investment in our Corporate Sponsor program, and recognizing the importance of a vibrant performing arts center in our community.

TO COME. OF COURSE, SO DOES

Bringing together people, services and products to meet the business and financial needs of our clients.

Closer to the issues