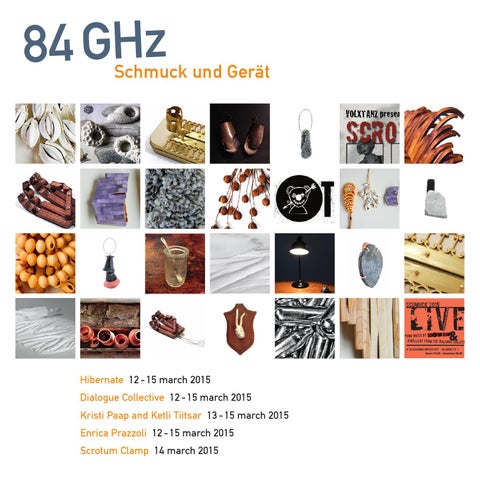 Punk Music by Jewellery from the Dialogue Collective at Glockenbachwerkstatt - Blumenstr. 7 doors 19:30 - showtime 20:30

Hibernate · Craft and Tradition Hibernate group was founded in 1999 and is formed by the three Finnish jewellery artists Helena Lehtinen, Eija Mustonen and Tarja Tuupanen. The group members work individually and separately but get together for feedback and criticism. In recent years the group has been silent, hibernating. In order to wake up the artists started the project Craft and Tradition. The topic was chosen because of its relevance for all group members based on their training and the northern way of living. Tradition is a huge concept in Finland - as well as craft - and includes everything from baking bread, silversmithing, embroidery, structure of splint basket, tacit knowledge, medallions... How is craft seen today - Hibernate tried to explore the field as artists, not as craftspersons. After a process of making, exchanging and reacting they present 36 studies about the topic. Plus consequences. Private view: Thursday 12 March, 19  Show runs: Friday to Sunday, 12 - 20 Address: 84 GHz, Georgenstraße 84, 80799 Munich, +49 89 30637911

Dialogue Collective · The Light Side In a small comedy theatre in central London Dialogue Collective sits attentively in rows waiting to be entertained. The film begins, it‘s a silent comedy from the 1970‘s. They start to fidget in their seats: some are smiling; some giggle; others look confused and in pain. Is this meant to be funny? Of course, it‘s hilarious! This year Dialogue Collective takes a serious look at comedy to celebrate the British sense of humour. Taking over the Marionettentheater Kleines Spiel, Dialogue Collective combines jewellery, objects, performance and media for an inquisitive exhibition exploring puns, rhymes, slapstick and games. Will you get the joke? Private view: Thursday 12 March, 18  Show runs: Friday to Sunday, 12 - 19 Address: Kleines Spiel, Neureutherstraße 12, 80799 Munich, +49 89 30637911

Ketli Tiitsar and Kristi Paap · nature morte Nature morte is the French term for still life, the depiction of inanimate natural and other objects. For centuries, this art form has offered artists the freedom to group the most disparate objects imaginable into compositions, allowing them to be more independent than they would be in working on commissioned portraits or landscapes. A similar trend can be found in modern jewellery: artists want to work free of dictates and precepts. The process of creating combinations of no longer living organic materials such as wood, cherry stones, and reflecting on and examining their properties, nature and cultural context, and turning them into jewellery is something that is driven purely by our experience. Ketli Tiitsar and Kristi Paap met more than 20 years ago while studying at the Estonian Academy of Arts Department of Jewellery and Blacksmithing. Since that time, they have both engaged in collaborations and had exhibitions independently of each other. They both live and work in Tallinn. Private view: Friday 13 March, 18  Show runs: Saturday and Sunday, 12 - 20 Address: Kunstgießerei München, Schleißheimer Straße 72, 80797 Munich, +49 89 30637911

Enrica Prazzoli · From my microwave with Love Strange machines traveling through time; made a long time ago but only a few weeks old. Just because we can see their inner mechanism it doesn’t mean we understand what they are supposed to do, any more than we understand what’s going on inside a computer chip. Someone made them, someone has to use them. By themselves they don’t move; they do not solve problems, nor create them. Why are these objects here, now. They started appearing in Enrica Prazzoli´s microwave, in September 2013. The artist started collecting the pieces and trying to find a sense to this all. Some pieces worked by themselves, some others were components of a bigger whole; some parts are apparently missing. The artist gets a glimpse of the person that is doing this, but she cannot communicate with her. By trying to make sense of a past that could have been, Enrica Prazzoli thinks about how different the things we interact with everyday would be; and how similar the reactions. There’s a fine line between brilliant and lunatic; determined and deluded. Private view: Friday 13 March, 17  Show runs: Thursday, Saturday and Sunday, 12 - 20 Address: LOT62, Schleißheimer Straße 62, 80333 Munich, +49 89 30637911

84 GHz presents contemporary jewellery art and metalwork at the Schmuck in Munich since 2005. Working together with influential artists as well as newcomers from all over Europe

photos and text in courtesy of the artists

84 GHz hosts conceptual exhibitions in the heart of Munich. 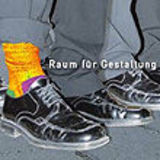